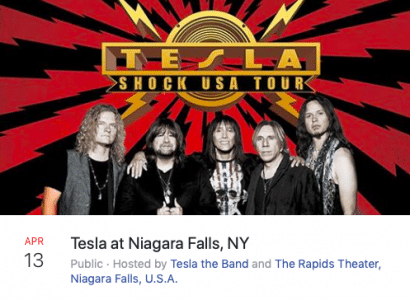 This would be my second time going to The Rapids Theater on the other side of Niagara Falls (the American side) to catch a live show. Two things struck me both times that I attended. First of all, I was surprised each time at the number of boarded up buildings as I passed The Rapids Theater on Main Street in Niagara Falls, New York looking for parking. The one building that really stood out among these abandoned buildings was the rather big and still active police station. I am not sure how the economy is doing in Niagara Falls, New York but all those abandoned buildings can’t be good. The second thing that struck me each time was the massive crowd attending The Rapids Theater to catch a live act. I remember when I went to see Steel Panther play two years ago. I was wondering just how many people would be there since I could barely see any concert goers leading up to going inside The Rapids Theater at around 8:00 pm. When I finally got inside, I was shocked to see that the venue was absolutely packed with people. Luckily, I had secured a press pass for the Steel Panther gig so I had an excuse to edge my way to the crowd and a great vantage point to see Steel Panther play during their first three songs that night.

This time around, I did not receive any response from The Rapids Theater to my press pass inquiries and although I knew that Tesla‘s show was sold out, I still ended up leaving pretty late from Toronto. I ended up leaving at 6:50 pm, made it to the border by 8:00 pm but alas the line-up to cross the border was pretty slow and it took another 30 minutes or so to drive the two to three kilometres to get to the venue. I was supposed to go see Tesla with Sleaze Roxx writer Tyson Briden but unfortunately something came up for Tyson and he wasn’t able to go. Odds are that I would have arrived a lot earlier had Tyson been with me. I was surprised to see a big line-up leading up to the entrance of The Rapids Theater and especially when I heard that the opening act was already done. In any case, I eventually made my way inside the venue and as expected. it was absolutely jammed with people. As it turns out, The Rapids Theater has a capacity of 1,750 for when people are standing for live concerts, which was the case on this night. It was hard not to think about to the amazing Rocklanta Festival, which really should have sold out with a headliner such as Warrant in a venue with a capacity of about 800 people. Perhaps the Niagara Falls, New York area should be the next stop for Brad Lee Entertainment?

One more thing struck me this time out at The Rapids Theater. I was one of the youngest people in the crowd even though people would certainly consider me “middle-aged” at this point in my life. I estimated that 90 to 95% of the crowd was likely older than me. This was of course in sharp contrast to when I saw Steel Panther play two years earlier at the same venue as the average age for the audience was definitely a lot lower. In any case, it was great for the venue and Tesla to have so many people in attendance. Personally, I actually enjoy smaller crowds so that I can get to the front without having to come to the venue hours before the show. Nevertheless, it was great to see a packed house and that Tesla had sold out the venue. By the time that I got in The Rapids Theater, it was clear that I wouldn’t be getting to the front without being a real asshole about it. Unfortunately, there was some sort of medical emergency that occurred in the men’s main washroom. There was a security guard not allowing anyone inside that bathroom, which resulted in a very long line-up to get into the much smaller second men’s washroom upstairs, which only had one stall. Just as I got into that smaller washroom, the lights went down and I could hear the roar of the crowd signalling that Tesla were about to start. 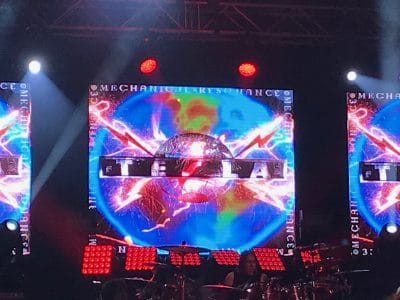 After quickly making my way down to the bottom floor, I only was able to make my way to just past the large bar as there was a sea of people in the general admission area before the stage. For those who haven’t been to The Rapids Theater, capacity might be for 1,750 but the vast majority of those people will likely be on the bottom level as the balcony area is towards the back and to my estimation, could not hold more than 300 people or so. One of the reasons why I decided to make the 1.5 hour trek to Niagara Falls to see Tesla perform was because I had never seen the band do a proper headlining set. Funny enough, I had seen Tesla open for Def Leppard on three occasions (1988, 2015 and 2016) and one other time when they headlined the M3 Rock Festival in 2014. Obviously, Tesla‘s sets while opening for Def Leppard were quite short and even their headline set at the M3 Rock Festival was likely a little time constrained.

Tesla kicked things off with a new track which I did not recognize. With respect to Tesla‘s latest studio album Shock, I must confess that I had a hard time at first listening to the record from start to finish due to the slicker production and way too many 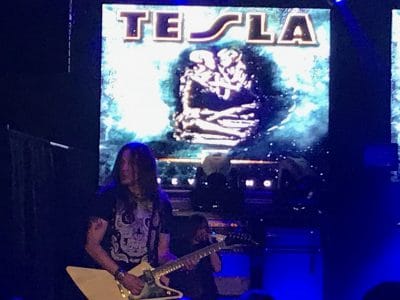 ballads. That being said, I listened to it again on the way to The Rapids Theater and although I still think there are way too many ballads and the album lacks a lot of bite, there are a few standout tracks such as the title track and the ballad “Love Is A Fire”, and lead vocalist Jeff Keith sounds absolutely amazing on the record. Perhaps I didn’t recognize Tesla‘s opening track “Tied To The Tracks” simply because I haven’t been able to make it to the ninth song on Shock on many occasions. It wasn’t until Tesla launched into their second song of the night — “Modern Day Cowboy” — that the crowd seemed really into the concert. During all of the other times that I saw Tesla play live, they have always played “Modern Day Cowboy” as one of the last tracks of the night so it was surprise to hear it played as the second song. Guitarist Frank Hannon addressed the crowd advising that Tesla had not played the next song live in more than 30 years until this tour. I have always loved “Be A Man” from the album The Great Radio Controversy so it was a real treat to hear that song played live.

Tesla performing “Be A Man” live at The Rapids Theater in Niagara Falls, New York, USA on April 13, 2019:

Although I give props to Tesla for changing up their setlist for this tour, it was quite obvious that the biggest cheers and sing alongs from the crowd would come during just about anything played from the first three Tesla albums — Mechanical Resonance 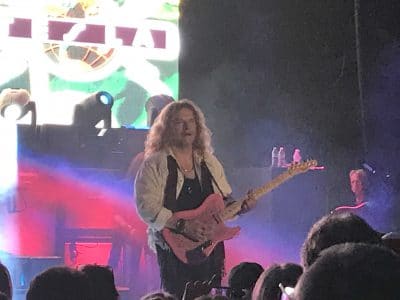 (1986), The Great Radio Controversy (1989) and Psychotic Supper (1991). Nevertheless, Tesla forged ahead going somewhat deep with two songs (“Miles Away” and “Caught In A Dream”) from the album Into The Now (2004) and one track (“Breakin’ Free”) from Forever More (2008), which happens to be my third favorite Tesla album after the first two. The rest of the material came from the three first albums and the new one of course. I was surprised by how much I enjoyed the new songs “Taste Like” and “Shock”, and funnily enough, how they did not sound that different from a track such as “Miles Away.” It felt like a lot of the harder edged songs in Tesla repertoire were not included in the setlist as the more rocking’ songs “Cumin’ Atcha Live” and “Gettin’ Better” from the debut album weren’t played (to my chagrin). As the evening went on, I was able to get closer to the stage since quite a few people were leaving their respective positions to presumably go get a drink. By the end, I was only about seven rows of people from the front of the stage. 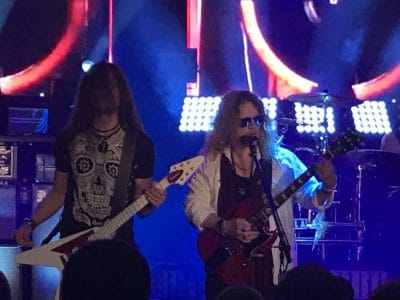 It seemed that the Tesla band members had adopted some slightly flashier outfits for this tour with guitarist Dave Rude sporting a flashy silver jacket and Hannon wearing a white jacket. Even bassist Brian Wheat seemed to have a suit jacket over his t-shirt. Jeff Keith sounded absolutely amazing. Frankly, the whole band sounded really good. The sound and execution from the band was almost flawless. As previously stated, the crowd was really into the first three albums and whenever Tesla would play a song from one of their first three records and particularly for the slower tracks such as “What You Give” and “Love Song”, you could really hear the crowd singing along. It was a great atmosphere and the Tesla band members seemed appreciative and not going through the motions unlike some of their ’80s contemporaries.

The one thing that really surprised me was during the song “What You Give.” Tesla had a big screen behind them and a lot of time, simply displayed album covers. However, on “What You Give”, there were old band photos being displayed as the group 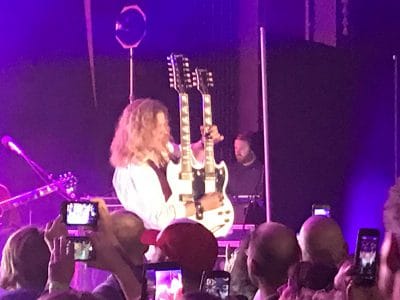 played. At first, I thought that someone must have made a mistake since the older band photos were only showing four band members but after a while, I realized that it was a deliberate move from Tesla to cut out former guitarist Tommy Skeoch from their photos and seemingly their history. That was even more evident when more recent photos were displayed of the band with five members since Rude had replaced Skeoch starting in 2006. I don’t know exactly what happened between Tesla and Skeoch but obviously know that the latter has struggled and been plagued with some major drug addiction issues and likely put his former band members through hell and back along the way. Nevertheless, it just didn’t seem right for Keith, Wheat, Hannon and drummer Troy Luccketta to cut out Skeoch from all of their older band photos. After all, Skeoch was a big part of those first Tesla albums and co-wrote five of the songs played by Tesla on this night. I don’t know if Tesla have been doing this for many years since this was the first headline set that I was catching from them in a non-festival setting but it just did not seem right to exclude Skeoch from older band photos.

Tesla performing “What You Give” live at The Rapids Theater in Niagara Falls, New York, USA on April 13, 2019:

Tesla closed off their set with three easy sing along type songs — “Love Song,” “Little Suzi” and the obligatory “Signs.” I was hoping that they would come back for an encore such as “Cumin’ Atcha Live” but that didn’t happen. I was surprised when I got out of the venue that was it only a few minutes past 10:30 pm! That’s probably the earliest that I have gotten out of a nighttime concert in a long time. Overall, I really enjoyed Tesla‘s concert but was disappointed to see older photos of the band excluding Tommy Skeoch. It just didn’t seem right. 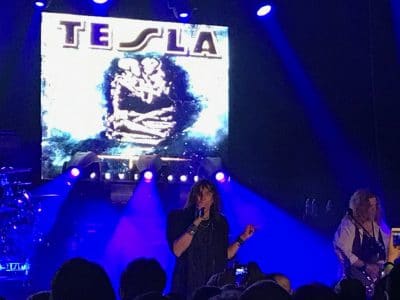