Although this was going to be my fourth time seeing Tesla play live, it dawned on me that I have never seen the group play a proper and complete headlining set. I first saw Tesla play live when they opened for Def Leppard on the latter’s ‘Hysteria‘ tour and ironically enough, this was the third time now that I would get to see Tesla open for the British (and one Irish) rockers. The other time that I got to see Tesla live was when they headlined the M3 Rock Festival in 2014 but that setlist was limited to only 12 songs due to time constraints. When I recently interviewed Tesla‘s guitarist Dave Rude, he had advised me that the group’s set would understandably be limited to the most well known hits while opening for Def Leppard. 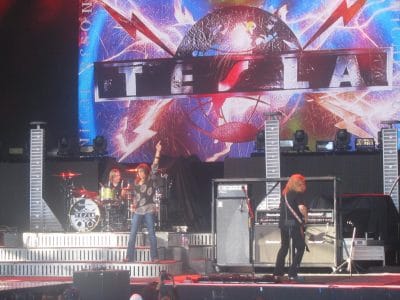 Given that Tesla were one of my favorite bands growing up and I count Mechanical Resonance as one of the great debut albums of all time, I would have liked to see Tesla have a longer setlist and/or the second slot on the Def Leppard / REO Speedwagon / Tesla bill. Nevertheless, I was happy just to get to see Tesla on Canadian soil because a quick check of the website setlist.fm indicates that the last time that the band played a headlining show anywhere in Canada was back in October 2005. One thing about Tesla is that you know what you are getting which is a really tight sounding, hard rocking, no frills, blue collar rock n’ roll band. Once again, Tesla delivered the goods in strong fashion on this night.

With the doors opening at 6:30 pm due to the Molson Amphitheatre’s apparent curfew of 11:00 pm and three bands to hit the stage before 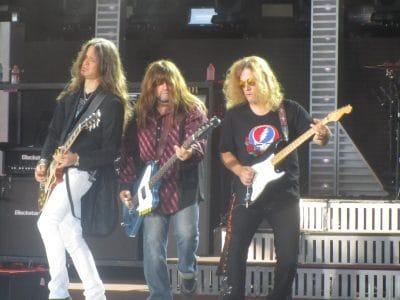 that cut off time, it was not surprising to see Tesla hit the stage shortly before 7:00 pm in broad daylight. I was very pleased to hear the song “Rock Me To The Top” from their debut album Mechanical Resonance, which was a track that I had not heard in a very long time since I only own the album on vinyl (and don’t have a vinyl player anymore). If anything, hearing that song played live made me even more excited for the release of Tesla‘s Mechanical Resonance LIVE! which will be released towards the end of next month to celebrate the 30th year anniversary of the release of the group’s debut album. There is no question that Tesla sounded great while playing “Rock Me To The Top” with Rude and Frank Hannon trading razor sharp guitar licks while singer Jeff Keith demonstrated that you can keep singing at a high level more than 29 1/2 years later. Funny enough, Keith pointed out to the crowd that Tesla had been together for 29 1/2 years which seemed an odd number to me. Why not just say 29 years or 30 years? In any case, that is not much more than quibbling over semantics. 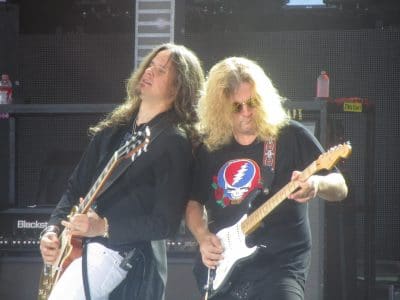 It was cool to see a huge backdrop with the cover of Mechanical Resonance while Tesla tore through their opening number “Rock Me To The Top.” Next up was “Edison’s Medicine (Man Out Of Time)” which also sounded great and for which a huge backdrop featuring the cover of Psychotic Supper was shown. It was nice to see that Tesla were able to use the smaller stage extension leading into the audience and Hannon, Rude and Keith all took turns in that regard. “Heaven’s Trial (No Way Out)” was next and with a large backdrop of The Great Radio Controversy album cover in the background. From then on, it was just one hit after another with “Signs,” “Love Song” and “Little Suzi” — the latter of which brought goose bumps to my arms. Although Tesla only ended up playing seven songs on this night, it was fun to see Hannon changing guitars virtually on every song. If he does the same thing when the band plays a headline set of presumably 15 to 20 songs, one has to think that he just might have one of the largest collections of guitars taken on the road. Tesla closed off their way too short set with a blistering rendition of their classic “Modern Day Cowboy.” 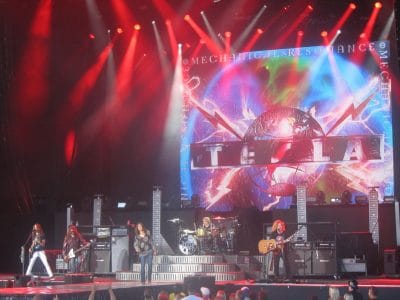 Seeing Tesla play live once again cemented to me what a great band that they really are and how I absolutely can’t wait for their live album Mechanical Resonance LIVE to come out. Now, I know that you might be wondering how come there is no review of the subsequent sets played by REO Speedwagon and Def Leppard, the reality is that the pull of seeing the partly “reunited” Guns N’ Roses turned out to be too much to take and that is exactly where my friend Chris and I ended up following the completion of Tesla‘s set. Overall, Tesla put on another ass kicking performance and proved that they “still got it.”