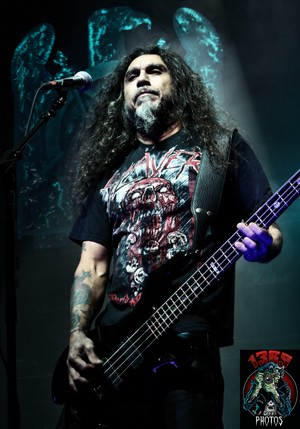 Slayer and Megadeth made good on the rescheduled dates of last winter’s American Carnage Tour. Originally the tour was supposed to make a stop in Portland’s Memorial Coliseum on January 19th, 2010 but was postponed due to Tom Araya‘s unexpected back surgery. So rather than getting this line-up on the second date of the tour we got them on the last date of September 4th, 2010.

It was an unseasonably cool summer day in Hillsboro, Oregon when the legions on rivet-heads lined up to gain entry into the Washington County Fairplex. It was a sight to see the predominantly male attendees, dawning their black; heavily worn and faded t-shirts, representing their favorite band of the evening. I was taken back to 1991’s Clash Of The Titans Tour — it was a similar vibe with half of the cast of characters, Slayer and Megadeth, teaming up for this particular tour. 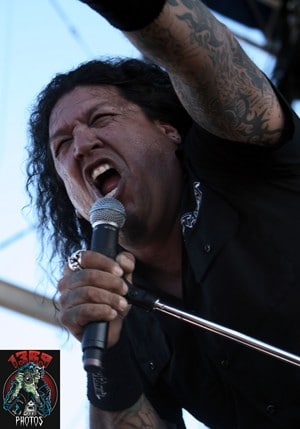 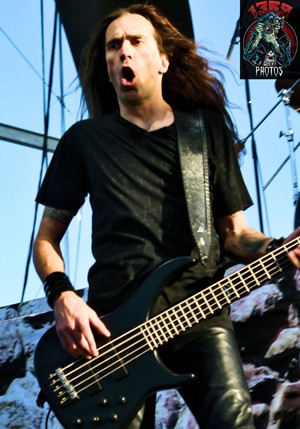 First up was Testament, who went on at 6 o’clock sharp. I missed them earlier this spring when they played Medford, Oregon with Megadeth. I was anxiously anticipating seeing Testament all afternoon and they didn’t disappoint one bit. Chuck Billy was diagnosed with cancer in 2001 but battled the dreaded disease and is now in remission — he looks healthy, strong and sounds as powerful as ever. Testament kicked off the festivities with “For The Glory”, the intro leading into “More Than Meets The Eye” off their 2008 brilliant, and latest, album The Formation Of Damnation. It was a bit strange seeing a thrash band of their caliber when the sun was still shinning. They made me forget of the time of day as they put on one hell of a heavy set which included such staples as “Practice What You Preach”, “The New Order” and “Into The Pit”. The latter provided the first mosh pit sighting of the evening. It’s like old times with the duo of lead guitarist Alex Skolnick and rhythm guitarist Eric Peterson. Skolnick left the band for a while a few years ago but he returned with a vengeance on The Formation Of Damnation. The rhythm section consisted of bassist Greg Christian holding down the groove and drummer Paul Bostaph bashing away like a lunatic with a hatchet in each hand for the duration of their 50 minute set. Testament‘s set ended with Chuck Billy parting the audience down the middle like a ‘heavy metal Moses’, ordering either side to “kick their ass” while leading into the closing track “The Formation Of Damnation.” It was wonderful.

For The Glory Of (introduction)
More Than Meets The Eye
Dog Faced Gods
The New Order
Practice What You Preach
Into The Pit
D.N.R
3 Days In Darkness
The Formation Of Damnation 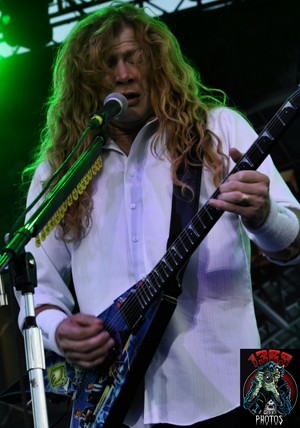 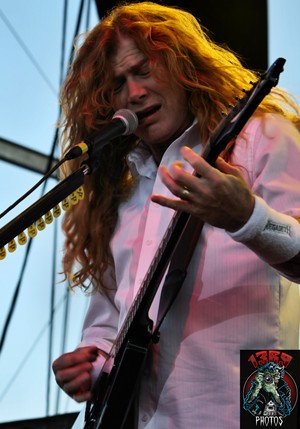 After a 20 minute set change at 7:10 PM, Megadeth‘s intro “Shut Up, Be Happy” from Ice T‘s Iceberg album echoed across the Fairplex and the band launched into “Holy Wars… The Punishment Due”. Joining Dave Mustaine in the latest incarnation of Megadeth is returning bassist David Ellefson who sounded like he had been in the band for the past decade, new guitarist Chris Broderick (formerly of Colorado’s Jag Panzer) and drummer Shawn Drover. The unit blazed through the Rust In Peace album with ease, making it look effortless — half of Rust In Peace has been played live, or has remained staples in Megadeth‘s set, over the years. It was a treat to hear cuts like “Poison Was The Cure”, “Lucretia”, “Tornado Of Souls” and the song that Mustaine vowed never to play live again due to its lyrical content, “Five Magics”. This particular version of Megadeth matches the line-up that recorded the Rust In Peace album. Their technically precise execution of the album left me dumbfounded. Mustaine struggled vocally through the classic album though, and a large portion of the set that came after. Mustaine‘s vocals are still snarly, but fell flat — at times you couldn’t hear him as it was buried in the mix. Whether it was by design or not, the audience didn’t seem to mind. After completing Rust in Peace Megadeth returned for an encore with the radio friendly “Trust”, which Dave sounded good on, Endgame‘s “Head Crusher”, the ballad “A Tout Le Monde”, which Dave sounded great on too, “Symphony Of Destruction”, and their signature track “Peace Sells” with a reprise of “Holy Wars” complete with band introductions. All in all a respectable performance by the speed metal pioneers. 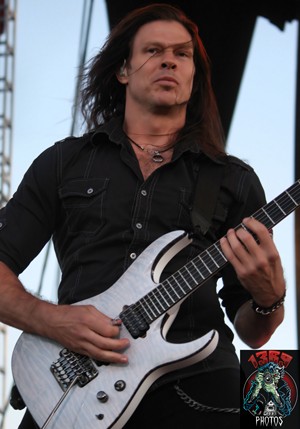 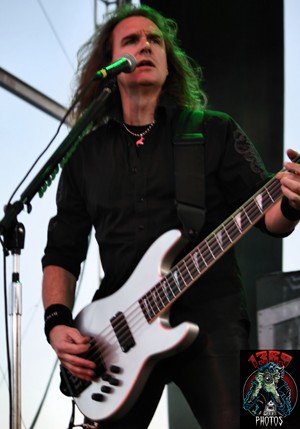 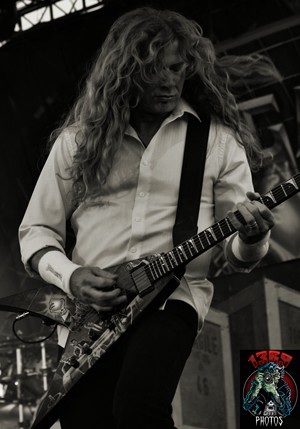 The sun set toward the end of Megadeth‘s set and at 8:50 PM all hell broke loose, literally, as Slayer took the stage. Slayer, like Megadeth, chose to perform a classic album and their selection was Season In The Abyss. Surprisingly, Slayer kicked off their set with two selections from their latest album World Painted Blood — the title track “World Painted Blood” and “Hate Worldwide.” The audience was very receptive and their energy level seemed to fuel Slayer‘s intensity. Tom Araya is no longer able to head bang due to the aforementioned back injury, but guitarists Kerry King and Jeff Hanneman have picked up the slack in his absence. To Araya‘s credit he still has a commanding stage presence despite the lack of head thrashing. Dave Lombardo kept time effortlessly, bashing along to Araya‘s ferocious bass lines, while Hanneman and King provided guitar pyrotechnics all night long. I was thrilled to hear “Blood Red”, “Spirit In Black”, “Expendable Youth” and “Dead Skin Mask” off Season In The Abyss. By the end of the set Slayer proved that they were the most consistent band of the night as they did not appear to have lost a step since I last saw them… they are timeless. Slayer ended with an encore that consisted of “South Of Heaven”, “Raining Blood”, “Aggressive Perfector” and “Angel Of Death”. A great time was had by all in attendance and if The Big Four doesn’t make it to North America next year this is the closest thing to it, and I was glad I was there.

Thanks to Jon T. Cruz for the photography and a huge Thank You to Rikki Z for pulling some strings and making this happen. I greatly appreciate it. 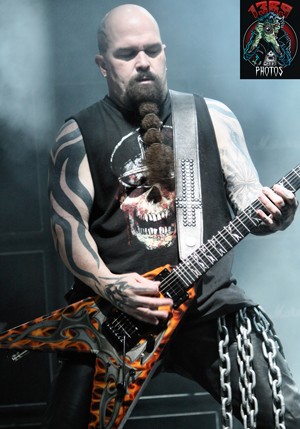 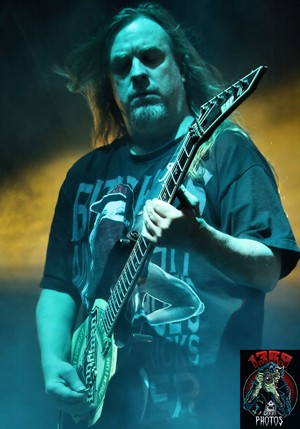