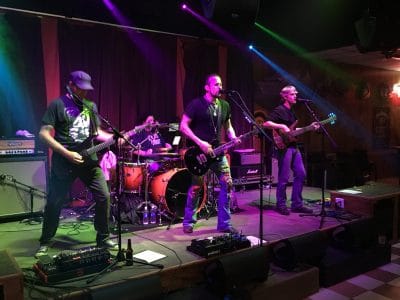 I need to start this by saying if you have a chance to see Brandon Gibbs in any of his ventures, please trust me in saying, you need to go! I am so impressed with his professionalism and what a great show he puts on. The Brandon Gibbs Band rocked the house!

Moccasin Creek started the night. They are a country rap rock group that got the crowd warmed up. The Brandon Gibbs Band — consisting of Gibbs on lead vocals and guitar, Kenny Bailey on drums, Chad Robbins on lead guitar and Dave Schwarm on bass — then took the stage and took over getting the crowd from their seats down to stage front. Lee’s Liquor Lounge is a smaller venue. The crowd was smaller but very excited to hear the band play and The Brandon Gibbs Band played like this was a sold out stadium! 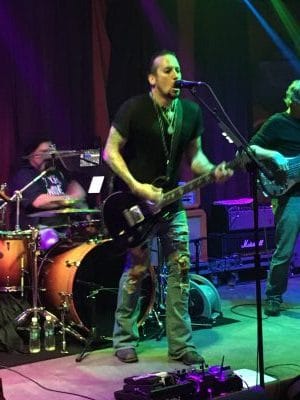 Throughout the show, Brandon told stories about the bands he has played in. He told stories of how Poison welcomed him in. He explained how nervous he was when The Gibbs Brothers opened for Poison. He said Poison came in and started asking him about what gear he was using and started to just talk to him and calm him down to go ahead and play the show. He talked about his record deal with Devil City Angels, and how he had been touring with them for about three months when the record deal came up. This was his first major record deal. He then started telling this story about his twin brother and that he is a police officer. They were riding together as they came upon an accident where a seven year old girl had been hit by a car and how his brother had comforted this girl and cared for her until she was taken care of by the paramedics. After all that, some people had come up to him and said “hey you are Brandon Gibbs.” He then told these people, “Did you miss what happened? The real hero is my brother!” Brandon stated that the experience that he had in watching his brother rescue the little girl that was hit by a car inspired him to write the song “The Hero.” This show was such a great time even just listening to all of Brandon Gibbs‘ experiences. As the show continued, Brandon kept getting the crowd excited by calling the bartenders for a cheer! They would always holler back!!

The energy and enthusiasm Brandon and his band members gave on stage was awesome! They played the show as if there were 1,000 people in the crowd and truth be told, there were maybe 30 people there. Even after the show was done, my wife and I had met and were talking to Brandon, and then the owner of Lee’s Liquor Lounge came over and thanked Brandon for playing his heart out as if it were a large crowd. He was very impressed by Brandon’s performance and the whole band and the energy 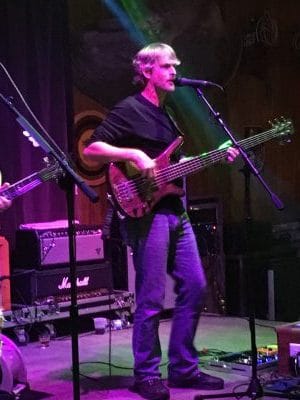 that they all had on stage. We all were drawn in by the music and guitar solos that blew the roof off! And, seriously, if you have a chance to meet Brandon and talk with him, please take the time. What a nice guy he is both on stage and off stage. I want to personally thank Brandon for taking the time to talk with my wife Tanya and I. We loved hearing all the stories you had to tell about how it all started for you.