THE CULT BRING NOSTALGIA BACK WHILE CONTINUING IMPRESSIVE CROSS-APPEAL

In my formative years when I was discovering all of the hard rock and heavy metal bands that I could find out about, there was one band that didn’t qualify as “hair metal” or even “heavy metal” yet was seemingly universally accepted by many in the heavy metal world but also what I consider to be mainstream music. With some of my friends that were (sadly) not into heavy metal, there always seemed to be one band that everyone could agree upon — The Cult. That band just seemed to have this massive cross-appeal of being able to be appreciated by many different fans of musical genres. I remember one of my closest friends who didn’t like any of the bands I listened to. The only two groups that we could agree upon were the Tragically Hip and The Cult.

I was reminded of The Cult‘s massive cross-appeal in the evening leading up to the band’s performance in Toronto a couple of nights ago. I had a friend of mine over for dinner and knowing how much I loved going into concerts, he brought many of of his old ticket stubs that were all neatly placed in old styled business card type books. A cool idea I must say. Of course, our musical tastes were quite different as my friend grew up on mainstream “popular” music. Accordingly, although there were many ticket stubs to admire and I knew almost all of the bands, there were only three groups that both of us had seen in concert, which turned out to be U2, Madonna (both of which I went with my top 40 music loving wife) and Living Colour. There was going to be a fourth band that we had both seen in concert but I had to make my way to the Budweiser Stage to see The Cult beforehand.

Of note, The Cult have also made an impression on Sleaze Roxx readers over the years as their album Born Into This placed at #14 on the Sleaze Roxx Readers’ Top 20 Albums of 2007 while Hidden City finished at #12 on the Sleaze Roxx Readers’ Top 20 Albums of 2016. I wasn’t initially planning on attending The Cult‘s show at the Budweiser Stage given that they were coming with Stone Temple Pilots and Bush, which are two bands that I never got into and that don’t fit — in my mind — within Sleaze Roxx‘s musical scope. I think that speaks to The Cult‘s cross-over appeal as there aren’t too many bands that I listen to that would be touring with Stone Temple Pilots or Bush. However, after getting the nod from Live Nation (thank you!) to cover the concert, I have to say that I was quite excited to check out The Cult as back in the late ’80s / early ’90s, I had always considered singer Ian Astbury as one of the great lead vocalists.

As I arrived to the Budweiser Stage to catch The Cult‘s set (they were scheduled last even though all three bands were dubbed “headliners” on this night), I was pleased to see that it was absolutely packed! It was a sea of people all the way seemingly to the end of the lawns. For those who don’t know, the Budweiser Stage has an amphitheatre type setting with a small general admission (sometimes there are seats in that section) with seats in the back in that and the lawn further back. The Budweiser Stage seemed filled to its capacity of 16,000 people. That was great to see. 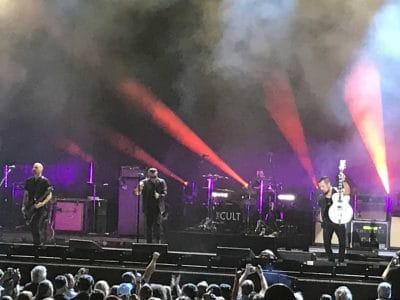 Oddly enough, The Cult‘s stage set up didn’t take the whole width of the stage so it was like having a square within a rectangle in terms of the band’s actual stage show. I was intrigued to see what songs that The Cult would play since I was only very familiar with the group’s late ’80s hits and the album Sonic Temple. As it turns out, The Cult covered a lot of ground on this night despite only playing 11 songs as three tracks were played from Love (1985), two from Electric (1987), three from Sonic Temple (1989), one from Beyond Good And Evil (2001), one from Choice Of Weapon (2012) and oddly to me, one from the Songs From The Cool World soundtrack (1992). Not knowing that much about The Cult‘s various line-ups over the years except that singer Ian Astbury and lead guitarist Billy Duffy were the mainstays of the band and current Ace Frehley bassist Chris Wyse had played in the group, I was surprised to see upon doing a little post-concert research that both Eric Singer (KISS, Alice Cooper, Badlands, Union) and James Kottak (Scorpions, Kingdom Come) had short stints in The Cult in the late ’80s.

The Cult kicked off their set with “Wild Flower” from the Electric album and the whole crowd seemed energized from hearing such a familiar song. Although Astbury definitely had the cool factor down with sunglasses, a dark jacket, t-shirt and pants, he was simply standing while singing from his mike stand and sometimes playing a tambourine for the first few songs. I was wondering why he wasn’t moving around as all you could seemingly see from afar are four guys standing while playing and a very small drum kit (the one used by new Sven Gali drummer Dan Fila in a small club about five days earlier seemed bigger). For the first half of the show, Astbury seemed rather immobile until halfway through the show after singing “Edie (Ciao Baby).” From then on, it seemed that a fire had been lit under him as he moved around quite a bit and started covering the width of The Cult‘s condensed stage. I wished that he had done from the beginning but better late than never. Duffy sounded great with what I assume were some Gretsch guitars. It’s funny that after all those years, I still associated Duffy with those old school looking guitars.

The Cult performing “Wild Flower” live at the Budweiser Stage in Toronto, Ontario, Canada on July 25, 2018:

One concern right off the bat was Astbury‘s voice. Unfortunately, Astbury was not singing the way he was on those classic The Cult albums from back in the late ’80s / early ’90s. It seemed that Astbury was doing a combination of talking and singing rather than singing. It was nowhere as bad as hearing David Lee Roth butcher some of the Van Halen classics. Frankly, I thought that Astbury got away with it except for the song “Edie (Ciao Baby)” where he was up by himself and the song sounded like a shadow of what I remembered it from back in the early ’90s when I was playing Sonic Temple on a regular basis. At the end of the day, Astbury still sounded pretty good but not quite at the level that I had in my mind going into the concert.

The rest of the band sounded good with Duffy not missing a beat. A few fans in the general admission area got a real treat as Astbury started throwing tambourines from time to time in the audience. The Cult were definitely stronger during the second half of their set starting from “Sweet Soul Sister.” The crowd seemed to lap up the better known tracks towards the end of The Cult‘s set such as “She Sells Sanctuary,” “Fire Woman” and the set closer “Love Removal Machine.” It felt like a trip down nostalgia by that point. It was cool for Astbury to address the crowd in French and English since Canada is officially a bilingual country but in Toronto, it seems that French may be the third language behind English and Mandarin so Astbury‘s French speaking may not have been appreciated the way it would have seemingly been in the cities of Ottawa and Montreal. 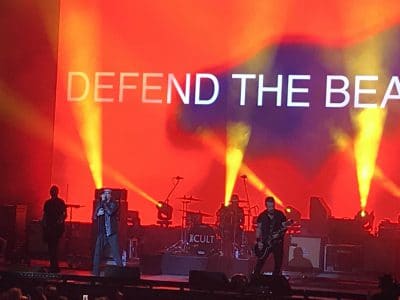 Overall, The Cult put on a solid performance and I would go see them again.