THE DARKNESS RECOVER TO FINISH STRONGLY 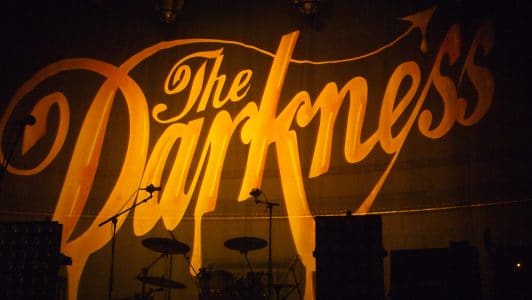 As an up-and-coming artist performing glam rock in the 2010s, my band, Lipstick, has received a lot of comparisons to The Darkness. I understand why the layperson may make that comparison. The Darkness are the only glam band to break into the American mainstream in the last decade and a half, unless you count Steel Panther. However, the members of Steel Panther are all veterans of the ’80s glam scene, and The Darkness were a band with young blood bringing retro glam to the masses. So, they’re the band that sets the benchmark for the amount of success a modern glam band wants to achieve, at least in the United States. 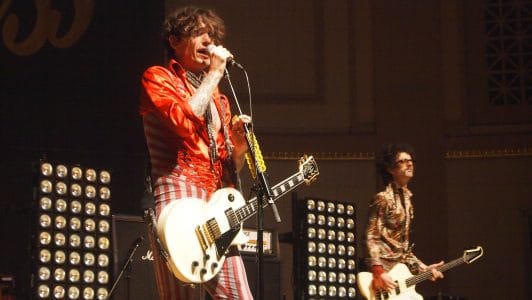 I didn’t discover The Darkness until long after their heyday. Crashdiet were my modern glam heroes, and when I finally stumbled upon The Darkness, I wasn’t instantly won over. “I Believe In a Thing Called Love” felt like modern pop with a glam edge to the instrumentation and I didn’t care much for it, but I did enjoy “Girlfriend” quite a bit. So, when asked to review The Darkness and their recent Nashville, Tennessee concert, I thought I’d have some fun seeing a campy, theatrical rock band play some fun and energetic music.

Given that Nashville is an industry city, almost everybody at every show is in a band or involved in the industry at some 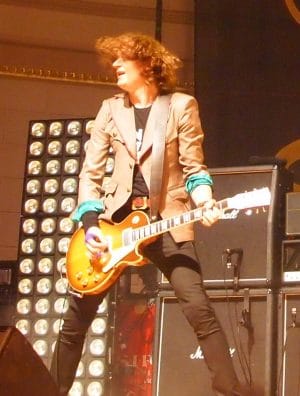 level, so in order to impress a Nashville crowd you need to bring your A-game. The Darkness, for the first big chunk of the set, admittedly were not bringing their A-game and had a rather lukewarm response from the crowd. The band seemed to be going through the motions, which may be enough to please most of their fanbase, but it was clear such tactics weren’t working on a Nashville crowd.

I wasn’t super into the set because I thought the songs would be catchier and the stageshow a little bit more theatrical. However, it should be noted that I am a casual fan and not a diehard. The show was fun, but I never really got sucked into the performance. Justin Hawkins even declared at one point that the crowd was being kinda lame (which, personally, I thought was kinda lame), but to his credit, he stepped up his performance later into the set. He began to joke more with the audience, he sang while doing a headstand, he jumped into the crowd while playing guitar and he made an effort to do better when he saw he was starting to lose the crowd. So, credit to him for stepping up and really giving it his all. The rest of the band are all solid performers, especially Dan Hawkins, whose excellent guitar playing was the glue that held the show together. 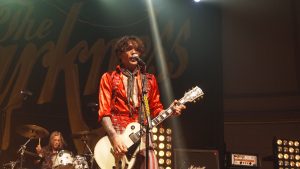 The song choices were solid, and it was humorous that the band did “I Believe in a Thing Called Love” twice (once before the encore, and once for an encore). The biggest let-down of the night was the band not playing “Girlfriend.” People were shouting for that song all night and the band didn’t play it. I don’t know why. Maybe because lyrics about an affair touch an emotional nerve with somebody in the band, or maybe they’re sick of the song. Either way, it was kind of a shame not to hear that song because it’s my favorite The Darkness song and clearly a fan favorite. Nobody is ever going to be completely satisfied with a setlist choice, but it does seem odd this one was left out considering how many different people were shouting for it.

The Darkness in Nashville 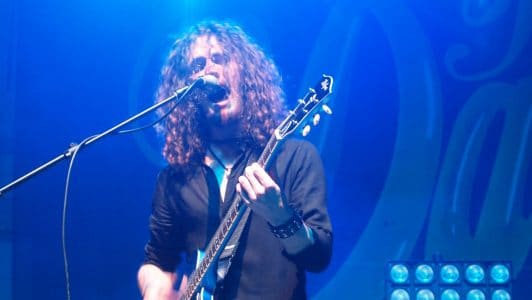 And how were the opening acts? Raveneye was a solid hard rock band with some cool Led Zeppelin influence, but like many modern rock acts, the songs weren’t particularly hooky or memorable. Their stage presence and showmanship was phenomenal, but none of their songs really made an impression on me as a listener. The Tip, however, fucking killed it. Catchy songs and amazing stage energy, The Tip remind me a lot of KISS pre-Destroyer era: an up-and-coming rock band with hunger, swagger and determination. In a lot of ways, they remind me of my old band The Man Power in terms of attitude and charisma, but where The Man Power was a punk-influenced band, The Tip are clearly more blues-influenced. 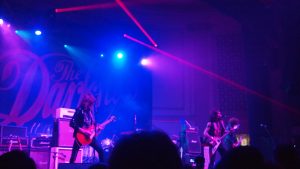 The Darkness put on an admirable performance and were able to recover from a lackluster start, but The Tip stole the show and easily put on the best set of the evening. Everybody has off nights, and to the credit of The Darkness, they were able to recognize this midway through their set and recover gloriously. Overall, I’d recommend checking out any of these bands if you see them playing your town, because all of them put on a fun show.