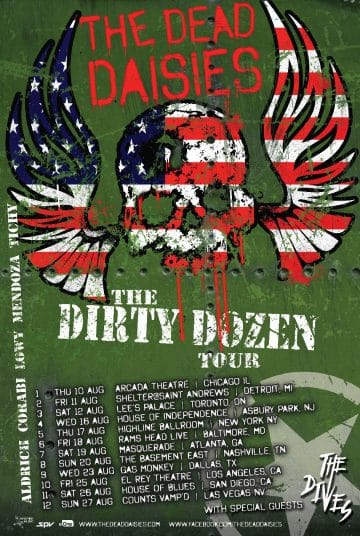 The Dead Daisies were formed by Jon Stevens and David Lowy in 2012, and since then, the line-up has been a revolving door of many talented musicians. John Corabi was hired in 2015 to replace founding member Jon Stevens as lead vocalist. In January 2016, it was announced that Richard Fortus (2013–2016) and Dizzy Reed (2013–2016) would be taking part in the the Guns N’ Roses‘ Not In This Lifetime Tour, which caused their decision to leave The Dead Daisies who replaced Fortus  with current guitarist Doug Aldrich. June and July were successful months for The Dead Daisies who played overseas at major festivals and a couple of sold out Japan dates as well as a sellout in Mexico City. I hope the success will continue on this month and beyond for The Dead Daisies while they are back in the States.

The Dead Daisies arrived at the Arcada Theatre in St. Charles, Illinois from just playing for a crazy packed crowd from the night before over at The Full Throttle Saloon out in Sturgis, South Dakota and they were ready to kick some ass. The crowd was starting to fill the venue and was definitely excited to see The Dead Daisies perform on this night. The lights went down with the intro song “Whole Lotta Love/”War Pigs” mashup playing as the band appeared with lots of energy out the gate with “Long Way To Go.” The crowd was buzzing. John Corabi looked comfortable and in charge just like any other time I’ve seen him onstage. No matter who Corabi is playing with, he owns the stage. Next was “Mexico” which is a definite tune that provides an ’80s vibe. The event song is what I refer to “Make Some Noise” because it has that feel that I’m at a sporting event whenever I hear this being played.

Marco Mendoza and Brian Tichy were solid with their rhythm section very tight. “Song And A Prayer” is one of the tunes that I dig and Doug Aldrich’s solo in that just kills. The Dead Daisies do like including and playing their cover songs in their 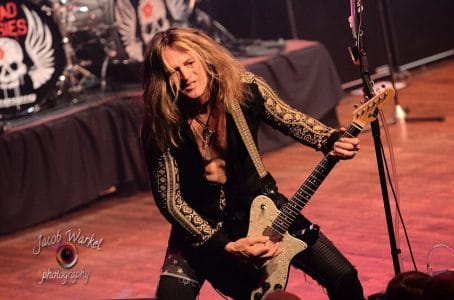 set. “Fortunate Son” by Creedence Clearwater Revival was the first cover on the night and Corabi’s vocals were just so powerful and sounded amazing on that song. “We All fall Down” — not one of my faves — was next and had its moments. I was glad to see the band play new songs regardless so much respect! The next song was a great tune that sounded great. Aldrich and Corabi brought the feel on this tune. The crowd seemingly felt this song and really enjoyed it. “Last Time I Saw The Sun” sounded great live. Hell, so far, it all sounded great. If you like rock n’ roll, that’s what you get with these guys. No bones about it, they are definitely a must see live.

I enjoyed Brian Tichy’s drum solo despite that not all drum solos are cool to see or watch. However, certain drummers deserve drum solos and Tichy is one of them. The last time I saw Tichy was when he was playing with Lynch Mob and Tichy kicked ass then as well. Tichy is just a great talent behind the drums and needs more recognition. His stick less drum solo while just playing with his hands was a sight to see as he was beating the hell out of the drums. It was just pure awesomeness. 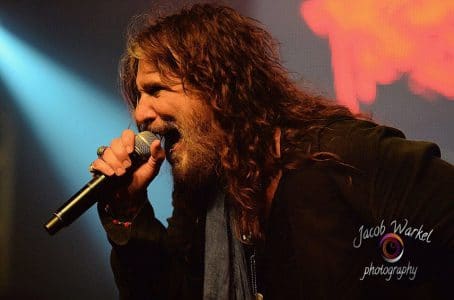 From the Make Some Noise album, The Who’s song “Join Together” was the next cover thrown in the set, which was not a bad performance. The song was used to get crowd participation going and got the crowd riled up. Another song from the album followed with “All the Same.” “With You And I” was more of the same — just solid playing. As the band was introducing its members one by one, they performed a bit of the following songs: “Dirty Deeds Done Dirt Cheap,” “La Bamba,” “Black Night,” “Run To The Hills” and “Heaven And Hell.” It was pretty cool the way they did that. Speeding things up a bit was “Mainline.” The song just drove with upbeat tempo, which is what this band may need more of. “Devil Out Of Time” was tight just as like their whole set on this night.

David Lowy was just all over the stage hamming it up for the cameras and interacting with the fans throughout the whole show. Guitar picks were flying all night for the fans to have a memory to bring home with them. The Dead Daisies‘ version of “Helter Skelter” was awesome to hear, but the song that seems to always get people going no matter, where and when is “We’re An American Band.” The fans seemingly loved every minute of this song  on this night and that kept going all the way down to the last song on the night — “Midnight Moses.” The Dead Daisies definitely are great showmen as they kept the crowd into it with their stage presence and interactions with the audience. This night was bad ass! 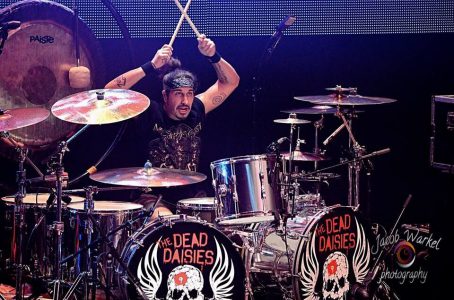 The Dead Daisies‘ sound has a classic late ‘70s to early ‘80s hard rock vibe with catchy songs, big choruses, powerful melodies and great hooks. I’m definitely recommending The Dead Daisies as a concert to check out if you have a chance to do so with so many talented musicians and their stage presence with big tunes that will kick your ass.

Time for a rant. My biggest problem was days prior to the show when mentioning The Dead Daisies were coming to town, people were like, “Who is that? I never heard of them. Who’s in the band?” Seriously, I know promotion is tough and getting the word out is still tough even though we as society have many ways through social media to get the word out but if you are not connected to certain links or groups you miss out on possible bands or concerts. Whatever it may be, you lose out but the biggest loser is the artist as well. So for any of you out there, please go to your Twitter, Facebook — whatever it may be — and follow online music mags, groups, anything music related and you may be surprised what you may be missing. 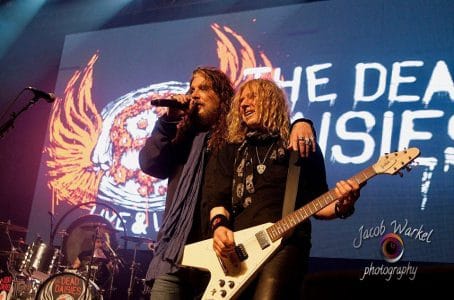