ALL HELL BREAKS LOOSE WITH THE DEAD DAISIES 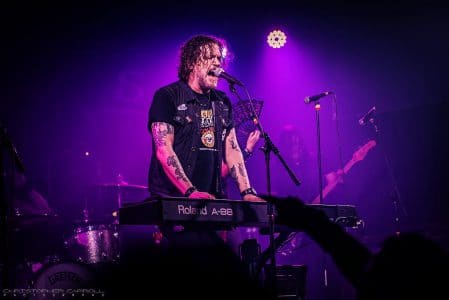 When I arrived at the Pennsylvania club, I immediately liked the layout of this ‘dive bar.’  It was big with one, wide open room and a second floor that wrapped around the perimeter. I also liked the fact that, in spite of the rain and floods around us, the place was packed!

Dizzy Reed’s band, Hookers & Blow, opened the show in Pennsylvania. Most people know Dizzy from being the Guns N’ Roses keyboardist for many years (actually, aside from Axl, he is has been a member of the band the longest) but he was also in the first incarnation of The Dead Daisies! Dizzy just released a new album, Rock ‘N Roll Ain’t Easy, and it sounds great so I was happy to see that his band Hookers & Blow opening. 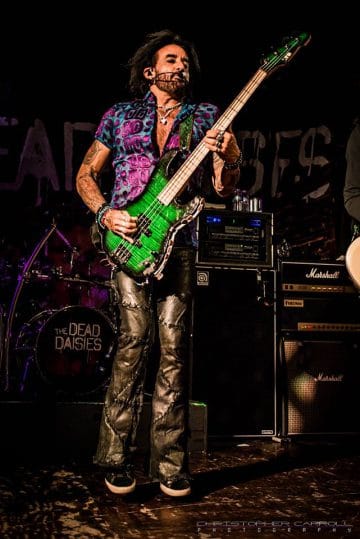 The Dead Daisies hit the stage and all hell broke loose! The energy level was kicked up a few notches. From a photographer’s standpoint, the stage was high. The lights were overbearing when they hit. They were way too dark when they didn’t so I was a bit bummed because I knew I wouldn’t be getting the quality photos I wanted but the music sounded perfect! All of these guys are seasoned pros so the entire band just pushed forward like an incredibly well-oiled machine. Each member knows when to step forward and take the stage and when to pull back to make room for the others. It’s refreshing to see a band with players of this caliber onstage. Bassist, Marco Mendoza, is entertaining, consistent and sings some great harmonies. Doug Aldrich puts out a wonderful mix of power rhythms and confident leads. David Lowy is having the time of his life jamming out. He is what holds this band together. John Corabi marches around the stage just doing his thing and sounding amazing. Although I was disappointed to hear that drummer Brian Tichy moved on, Deen Castronovo is, musically, a great addition to the band as he plays drums like a controlled maniac and can sing as well as any lead singer in the business.

The Dead Daisies are out in support of their latest recording Burn It Down and, by the look of this crowd, it appears their American audience is growing rapidly. What I heard was only supposed to be 12 US dates, has, so far, turned into 23. These guys always sound perfect live. You can just tell that, musically, each one of them is so on top of their game so playing a show is just fun for them. 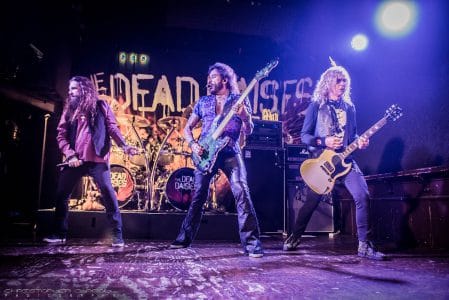 I’m shocked that every single person in the US isn’t a Dead Daisies fan. This is a band that’s brought back everything that is good about rock music — driving music, crunchy guitars, energizing leads and gritty vocals that have feeling in them. I know the music industry has changed and unfortunately, that keeps people from hearing everything what is out there but if you aren’t yet a fan, you should definitely pick up a Dead Daisies CD. It will breathe new life into your CD player. You’ll be reminded of the days when an album or CD was released and it was so good that you just listened to it over and over repeatedly.

The Dead Daisies‘ next US appearance, technically, will be on the KISS Kruise and then, they are off to tour the UK and Europe for the rest of the year. Anytime you have the opportunity to see the Dead Daisies, you should take it! 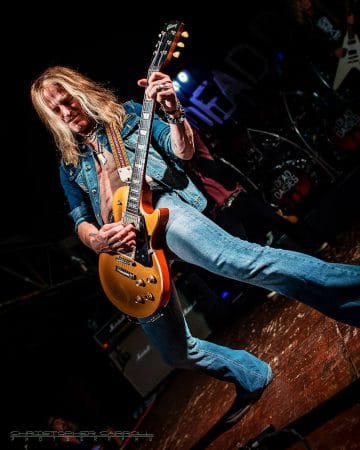 02. Rise Up
03. Make Some Noise
04. Song And A Prayer
05. Dead And Gone
06. What Goes Around
07. With You And I
08. Last Time I Saw The Sun
09. Fortunate Son (Credence Clearwater Revival cover)
10. Devil Out Of Time
11. Medley during band introductions Highway To Hell / The Boys Are Back In Town / Rock And Roll All Nite / Smoke On The Water / Heaven And Hell
12. Leave Me Alone
13. Bitch (Rolling Stones cover)
14. Mexico
15. Long Way To Go
16. We’re An American Band (Grand Funk Railroad cover)
Encores:
17. Midnight Moses (The Sensational Alex Harvey Band cover)
18. Helter Skelter (The Beatles cover)