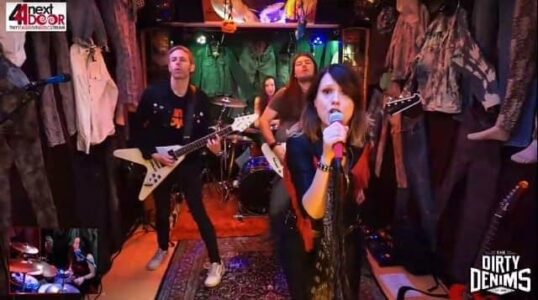 Over the last year and a half, I “discovered” one of the hardest working and most enthusiastic bands around — The Dirty Denims. Based in the Netherlands, The Dirty Denims have released a slew of albums but it wasn’t until 2020’s Ready Steady Go! that Sleaze Roxx really took notice or became aware of them. Spearheaded by lead vocalist (who also plays keyboards and rhythm guitar) Mirjam Sieben and lead guitarist Jeroen Teunis, The Dirty Denims have been around for about 15 years and their current line-up for the last few years also includes bassist Marc Eijkhout and drummer Suzanne Driessen. I have to say that I have been very impressed with the group’s work ethic — they play 40 to 45 shows per year during non-Covid years — and they really seem to make an effort to connect with their fans and especially provide value to whomever joins The Dirty Denims Memberships (there are three different types of levels).

It also helps that The Dirty Denims‘ music is really good. In fact, I placed their latest album Ready Steady Go! at the #3 spot on the Sleaze Roxx’s Top Ten Albums of 2020. Think a cross between AC/DC and Joan Jett & The Blackhearts, and you’ll have a good idea of what The Dirty Denims sound like. Once artists started putting on live stream concerts around the start of the Covid pandemic shutdown, I was checking out quite a few of them but I have to say that aside from KISS‘ New Year’s Eve show from Dubai, I really haven’t checked any out since Steel Panther‘s Rockdown In The Lockdown live stream show back in August 2020. I suppose that I just really miss seeing live shows (with my last one dating back to seeing Geoff Tate in Buffalo, New York, USA at the end of February 2020 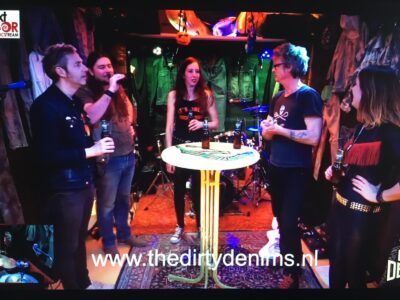 ) and seeing a live stream concert is kind of like checking out a live concert on DVD. It’s good but nothing great. In any case, I was working on the weekend and checking my Facebook feed during a short break when I came across a post that indicated that The Dirty Denims had some sort of live stream show that was available for viewing. I ended up checking it out and it turned out to be a live stream show from a venue called 44 NextDoor in Alkmaar, Netherlands.

The stage itself was very tiny. The decor was pretty cool with clothes seemingly hung up on the three walls surrounding the band. The 44 NextDoor host seemed very enthusiastic to have The Dirty Denims playing and the group — as expected — seemed thrilled to be there. After all, The Dirty Denims advertise themselves as playing “Happy Rock” so I would expect nothing else from them in that regard. Although the stage was quite tiny, The Dirty Denims members — mainly Sieben, Teunis and Eijkhout — were doing plenty of choreographed moves, which was fun to see. There was even a mid-set interview. Normally, I would really hate these types of “intermissions” but it was fun to see the band members chat and answer some questions before resuming their set. Even though I am only familiar with The Dirty Denims‘ last two albums Back With A Bang! and Ready Steady Go!, whatever songs that I didn’t know were still fun to listen to as the group’s material is quite straightforward and easy to get into. The Dirty Denims ended up playing one song from their Wanna Be Famous EP (2012), three from High Five (2014), six from Back With A Bang! (2017) and six from Ready Steady Go! (2020).

The Dirty Denims’ setlist for 44 NextDoor live stream show:
01. Fit In Stand Out 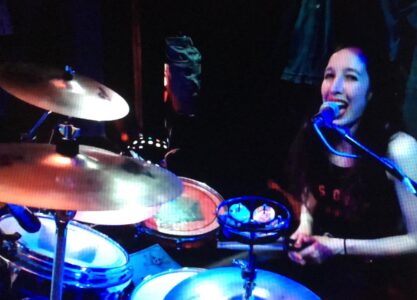