THE FIFTH DISPLAY A MUCH HARDER EDGE LIVE 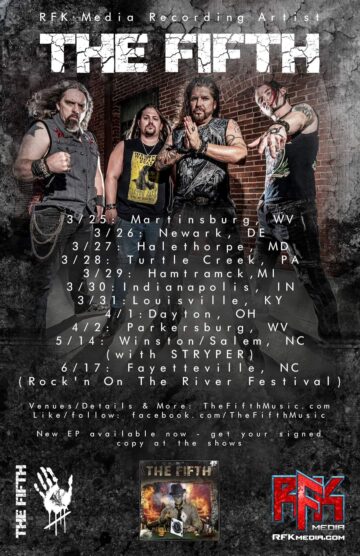 2022 brings us not only a brand-new EP from The Fifth, but also a round of tour dates from the band, which kicked off on March 25th in Martinsburg, West Virginia and continues on before convening April 2nd in Parkersburg, West Virginia at the Dils Center. Dubbed the Calm Before The Storm Tour, this trek takes the North Carolina band through a constellation of the eastern United States with shows in Pennsylvania, Michigan, Indiana, Kentucky, and Delaware (among others). Serving as direct support on the tour are Offensive, who I had not yet heard prior to attending this concert but was highly anticipating. I caught The Fifth at their March 27th date in Halethorpe, Maryland at the Fish Head Cantina. With this being my very first concert of 2022, I was really looking forward to it and seeing four bands that I have never experienced live before. I hadn’t been to a show since November of 2021, which felt like a small eternity for me. December seems to generally be a slower time for live music (with the holidays) and there wasn’t much going on in January and February that interested me. But it looks like that is about to change, with my concert calendar filling in significantly in the past few weeks. That’s a good thing. 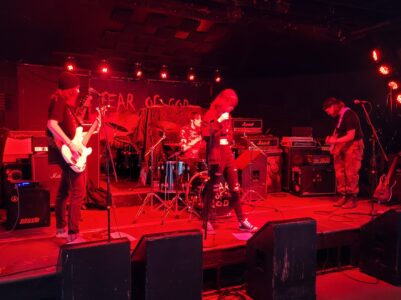 Westminster, Maryland’s fledgling alternative/punk rockers On Air were first to take the stage. The members of On Air are all in their early 20s, and with the exception of their brand-new singer (who made her debut with the band at this show), they’ve been playing together for the last five years. I thought that given their age and the fact that this was their first show with a new vocalist, they played very well and were a lot of fun to watch. The musicianship was there, as was their passion for what they were doing on stage. Standouts included an original song titled “Ok” (about not being Ok) and a faithful rendition of Fall Out Boy’s “Sugar, We’re Goin’ Down.” Not the easiest cover to execute properly by any means, and a testament to this young band’s potential in the years to come. 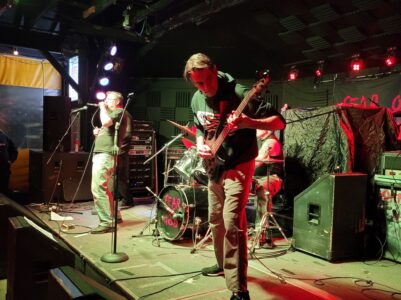 Things took a turn from there, with the light-hearted, upbeat vibe of On Air being eclipsed by Fear of God’s hardcore / punk sound. Think D.R.I., the Crowmags, Sick of It All and Fugazi, and you’ll have a general inkling as to the detour that I’m depicting. I consider myself only a casual fan of punk rock, however I could appreciate the ferocity with which Baltimore’s Fear of God delivered their set. Songs like “Aim to Kill”, “Death To Music” and “Heads I Win, Tails You Die” were 100% believable and not the least bit contrived coming from this band, who I could tell were down-for-life with the punk genre. The relentless guitar riffs and pummeling percussive attack barreling through every song give Fear of God a bona fide punk rock credibility.

I made a point of getting into town early so that I could catch opening act Offensive, who are out in support of their new album 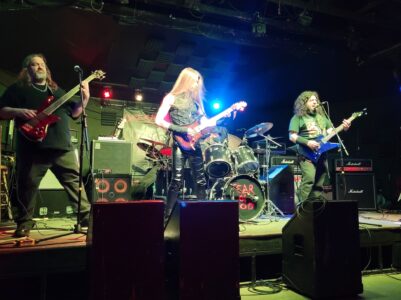 Awenasa. The thrash metal band, hailing from Essex, Maryland, were formed in 2015 by singer / guitarist Leon Sohail. They have a new album out which features guest appearances by several notable heavyweights in the world of metal including Roy Z, Blaze Bayley, David Ellefson and Tim “Ripper” Owens. Sometimes the best opportunity to catch a new band is when they’re still on the rise and opening for another act. The buzz is still building on Offensive, who’s unique sound reminds me of a cross between Hatebreed and Iron Maiden if that’s fathomable. Sohail barks out his rapid-fire vocals in a style that reminds me of Jamey Jasta or Slayer’s Tom Araya while Blake Shannon’s guitar leads are very harmonic in an Iron Maiden style. Highlights included “Babylon”, “Tales of The Fallen” and “King of The Underworld” which I learned is one of the first songs that they played live after forming. Most of their song lyrics are foreboding with murder as the subject matter.  That isn’t too much of a shocker given the band name as it all comes together beautifully and brutally. 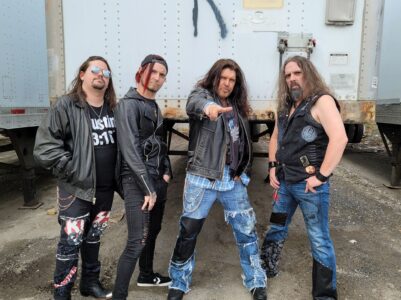 The Fifth are fronted by powerhouse vocalist and mainstay Roy Cathey, notably of Cold Sweat and SteelCity fame. Rounding out the current line-up are guitarist Justin Womble, bassist Jake Tripp, and drummer Gary “Zeus” Smith. They’ve recently signed on as one of the first acts with Ron Keel’s RFK Media for the release of their new EP, which they had on hand for sale at the show. In the weeks leading up to the show, I tried (unsuccessfully) to purchase a physical copy so I was sure to grab one post-haste from their merch table at the venue. Money well spent. Early spring is generally a great time to catch a show at the Fish Head Cantina, with the concert area partially open to the outdoors for a “patio” type of atmosphere. That wasn’t the case last Sunday night. It was frigid with snow flurries and the patio was enclosed with space heaters.

The Fifth got a late start due to technical difficulties / sound issues at the venue (not due to any fault of theirs). The band members stood by patiently like caged lions about to be unleashed while the soundman sorted things out. After several minutes, 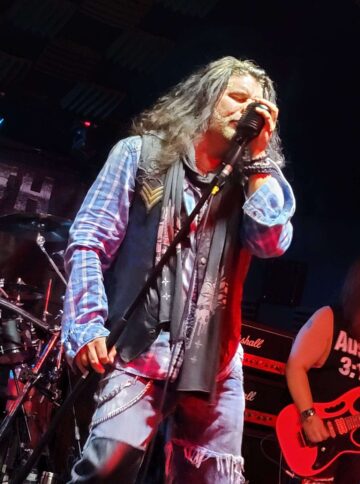 they tore into an impromptu soundcheck cover of Lynch Mob’s “Wicked Sensation” that was one of my favorite moments at any show that I’ve ever been to. That’s what I call “rolling with the punches” and demonstrates a true workhorse ethic by my estimation. Old-school Cold Sweat fans can appreciate the irony in this song selection, too. Once everything was deemed copasetic with the levels, the band officially kicked off their show. Things were sounding good though and I wish they had finished the soundcheck off. They have more than ample chops to do that song justice and it was rockin’. In hearing them play, it was hard to believe that this was just the third show of the tour (having just kicked off the Friday night before). One wouldn’t have known it judging by the sound of the band and how tight they were as a unit.

I was curious as to how well-attended the show would be with it being on a Sunday night, and unfortunately the crowd was on the thin side for this performance. Between the cold weather and the show being on a work night for most, those factors possibly squelched any chance of a huge turnout. The band made the most of it, with Cathey joking that this show was “like playing for friends in a garage.” The Fifth didn’t let that hinder their performance one bit, and still played as if they were performing before a packed house. Their set was comprised entirely of originals (not counting the Lynch Mob song that they ran through to check the sound).

They officially kicked off their set with “Long Way Down” before getting to “Confessions of Man”, the title track of their full- 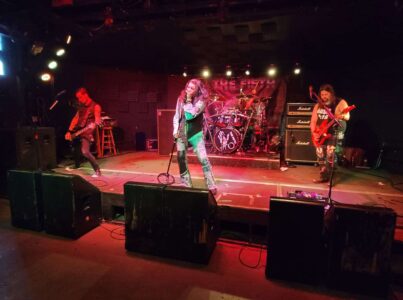 length album. Their new EP saw representation via “Coming To Get You” and the first single / video “Shake Little Sister.” Both tracks translated very well to a live setting and were even heavier than they are on the CD thanks in part to the monstrous bass grooves that take the music to new heights. That extra punch given to “Shake Little Sister” is just what the song needs. Before getting to “No Going Home”, Cathey shared that the band had stayed at a truck stop the night before where he was nearly stabbed. That is, until his assailant realized that he was packing and had a change of heart. These are the trials and tribulations of being a working musician on tour. Back to the music, that song is a personal favorite of mine from the band, and I was glad to see that they got to it. If you’ve never seen the video for “No Going Home”, it is available on YouTube and worth checking out. Of course, they threw in “The Gift”, which is perhaps one of the most recognizable songs in The Fifth’s catalog. They closed out their set with the rollicking and bluesy “Crying Shame.”

The Fifth are undoubtedly on “the level” and seemingly just one hit song or tour away from connecting with their niche audience. They’re rough and tumble and don’t pull any punches. Seeing them in a small club such as the Fish Head Cantina 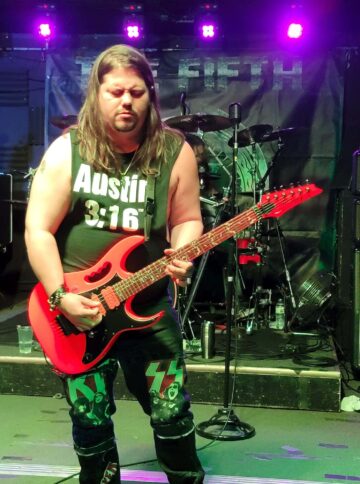 only leads me to believe that they would do well in larger venues. Those qualities would make them perfect to perform at larger scale bike rallies or on a co-headlining tour with a band like Jackyl, Buckcherry or KIX. They have a much harder edge live and get in your face with 100% conviction and attitude. To those in Michigan, Indiana, Kentucky, Ohio and West Virginia, take note — The Fifth are headed your way. The band is revitalized and on fire. I recommend checking them out if you have the opportunity. To hear their new EP, check out tour dates and obtain booking information, visit www.TheFifthMusic.com.