You may have noticed that Sleaze Roxx usually does not provide any coverage to cover or tribute bands. Why you may ask? Well, Sleaze Roxx is all about original music and covering tribute bands could potentially exponentially increase the amount of bands to be covered on the site. The one exception is the case of The Iron Maidens, the all-female tribute band to Iron 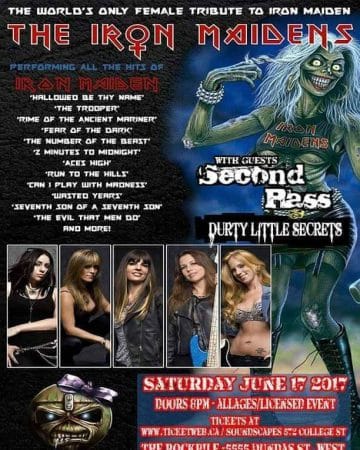 After a long drought of more than 50 days without a concert — I feel like a concert junkie — with my last show dating back to L.A. Guns‘ (with opener Diemonds) fantastic show at The Rockpile on April 26th, I was more than primed to see The Iron Maidens on this night. Unfortunately or fortunately, depending on how you view things, I had a smorgasbord worth of choices in terms of concerts to attend on this night. Not only were The Iron Maidens scheduled to play at The Rockpile but the Bovine Sex Club was hosting a who’s who of Toronto bands which included a bill with Old James, Cauldron and one of my personal favorites — Diemonds. In addition, local Toronto rockers Last Bullet were headlining the much larger The Phoenix Concert Theatre with a slew of other local bands opening. That in itself was a bit ironic as I would have thought that The Iron Maidens were the biggest draw, followed by sleaze rockers Diemonds (who have been around for about 11 years with two full-length albums under their belt) and followed by Last Bullet (who started in about 2011 and had two EPs going into their gig). But the tables were somewhat turned as Last Bullet were headlining The Phoenix Concert Theatre, which has a capacity of 1,350 (Last Bullet ended up doing really well with the four other bands drawing an impressive 800 people), while The Iron Maidens were headlining The Rockpile with its capacity of 375 people. And oh yeah, the Bovine Sex Club apparently has capacity for 200 people.

I understand that there were some other concerts on hand including the Mississauga Waterfront Festival (which had Canadian KISS tribute band Destroyer playing) and The Sound of Music Festival in Burlington, Ontario (with Moist headlining along with others such as The Lazys and Bleeker). All this to say, that there were three concerts out of five that I would have attended if they weren’t going all at the same time. Grrrrrr. Luckily for me, I would be able to attend two of the three concerts that I wanted to attend. Obviously, it’s frustrating when there are three concerts that I legitimately would have attended on one night and I have to make some hard decisions. At the same time, if anything, it proved to me that rock n’ roll can be alive and well in Toronto as the two concerts that I attended appeared to both be pretty much sold out.

I arrived at The Rockpile just before 9:00 pm hoping to score a spot in the front row besides the stage but alas the venue was 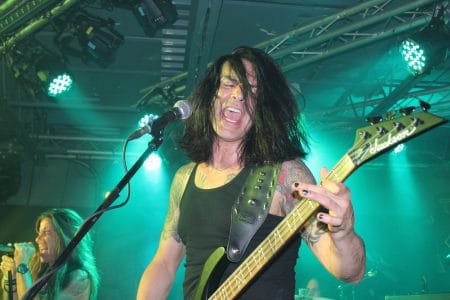 already pretty packed with people. I was in any case able to eventually secure a spot at the front row of the stage but it was to the side. I recalled that I had seen Durty Little Secrets open for L.A. Guns back in April and although I did a review of their opening set which I stand by, I eventually pulled that portion of the review for reasons that are really irrelevant and unimportant at this time. It’s hard to recall but if my memory is correct, Durty Little Secrets consisted of five musicians back in April but this time around, there were only four.  I walked in just as they were finishing their last original of the night before embarking on a bunch of cover songs that the crowd seemed to enjoy. I was impressed with singer John De Medeiros‘ vocal range given that he tackled covers ranging from Ozzy Osbourne (“Crazy Train”) to Alice In Chains (“Man In The Box”) to Skid Row (“Piece Of Me” and “Youth Gone Wild”) to AC/DC (“Whole Lotta Rosie”). I thought that the AC/DC Bon Scott era vocals suited him best as his rendition of “Whole Lotta Rosie” was an impressive one.

Having forgotten which were the opening bands for The Iron Maidens on this night, I was pleased to see that Second Pass were up next. I was absolutely blown away the first time that I saw them play in the summer of 2014 and especially by 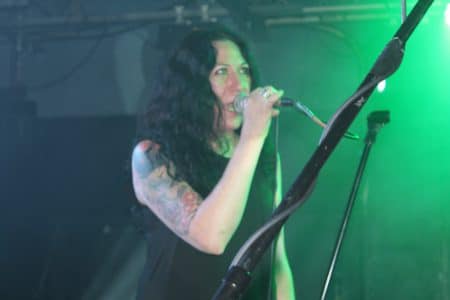 frontwoman Veronica McNamee‘s powerhouse voice. At that time, their songs seemed to be a little more upbeat but with time, it seems that Second Pass have adopted even slower paced Black Sabbath type moody tunes that didn’t seem to translate that well live this time around.

There’s no question that Second Pass are comprised of talented musicians. From bassist Andrew Bunstain‘s haunting bass licks to masked guitarist Steve Pass (he wears sunglasses, ball cap and a bandana over his face on stage) to McNamee, there is tons of talent to go around. Joining the group this time around was a new drummer (to me). I believe that this is the third different drummer that I have seen playing for Second Pass since seeing them first perform three years ago. The opening track (presumably called “DNR”) had a cool bass intro but felt really long towards the end as it never really picked up. By the time that Second Pass were into their second song (which I did not recognize), I was hoping that they would fast forward to their peppier songs that I knew. Finally, “Biting My Tongue” was played which some of the crowd was obviously familiar with judging by the reaction for that song. McNamee has always reminded me of Tragically Hip‘s enigmatic frontman Gord Downie as she tends to ramble while talking to the crowd although not as long and as incoherently as 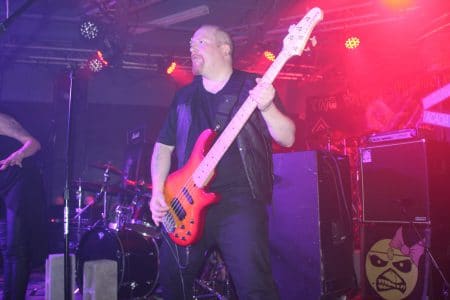 Downie might have. From “Biting My Tongue” onward, it seemed that Second Pass picked it up a notch. Other highlights from their set were “Last Man” and the closer “Hate The Keeper.”

I started getting goose bumps as I heard Iron Maiden‘s cover of UFO‘s “Doctor Doctor” playing on the PA just before The Iron Maidens were set to hit the stage. It reminded me of the excitement that I always get when Iron Maiden are about to start 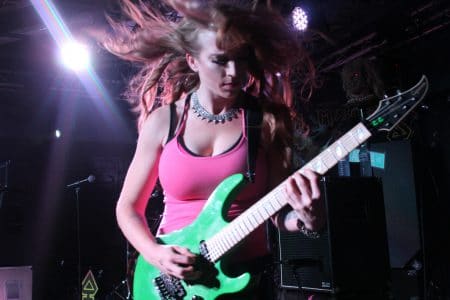 a concert. After hearing “Doctor Doctor”, eventually this translated into the infamous Winston Churchill speech “We Shall Fight On The Beaches” that can be found on Maiden‘s classic live album Live After Death. Finally, The Iron Maidens hit the stage running with a great rendition of “Aces High.” I was standing very close to guitarist Courtney Cox and it was fun seeing all of her facial expressions throughout the night as she would seemingly make eye to eye contact with people in the crowd. There’s no need to say that this lady plays a mean guitar and has some sexy looks to boast!

While the line-up of bassist Wanda Ortiz, drummer Linda McDonald, and guitarists Cox and Nikki Stringfield, were definitely nailing replicating Iron Maiden‘s music, the big question mark in my mind was lead vocalist Kirsten Rosenberg. Those concerns turned out to be for naught as the female singer proved to have the vocal chops to handle all of the Maiden material while making it her own. I loved that The Iron 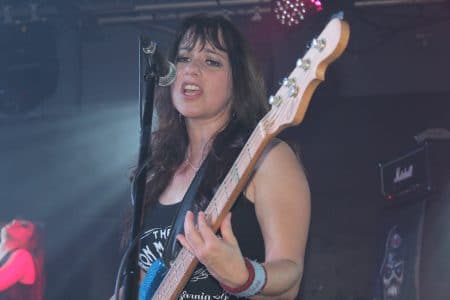 Maidens were playing more “obscure” songs from Maiden‘s repertoire such as the second song “The Evil That Men Do” that has seemingly been dropped from Iron Maiden‘s set some time ago. Other “obscure” Maiden tracks played on this night by The Iron Maidens included “Alexander The Great” (from the underrated Somewhere In Time album) which apparently has never been played live by Steve Harris and company, “Still Life” (from the Piece Of Mind album) and the instrumental “Losfer Words” (from Powerslave). Those turned out to be some of my favorite tracks out of the ones played by The Iron Maidens on this night.

Rosenberg turned out to be an enthusiastic frontwoman and more than able to get the crowd cheering and screaming in Bruce Dickinson like fashion. Occasionally between songs, she would raise both arms in the air to get a big cheer from the crowd just like Dickinson still does to this day. Perhaps the best Dickinson reference was during “Running Free” where she split the crowd into two having each half of the audience scream “Running Free” as loud as they could while “competing” with the 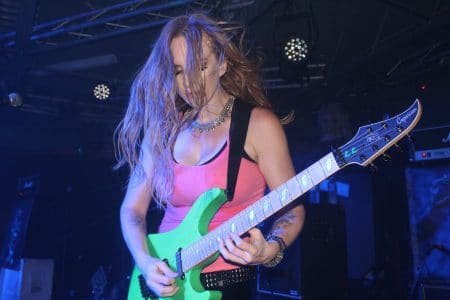 other half. Good times. It felt that I was listening to Live After Death all over again or seeing Iron Maiden when they did their Eddie Rips Up The World Tour in 2005 playing all of their older songs from their first four albums. Whatever the case, it was fun to relive that moment albeit in a smaller club setting.

What struck me the most as the evening wore on was that The Iron Maidens were only playing songs that dated 29 years or more yet the songs stood the test of time so well. Funny enough, some of The Iron Maidens band members weren’t even born — I am thinking of Cox and Stringfield — when some of these songs were released! That’s a true testament to how timeless and great Iron Maiden‘s songs really are. It was fun to also see a diminutive Eddie come out (watch out for those low ceilings Eddie!) on a couple of songs including on “The Number Of The Beast” where the monster did some crowd surfing for a little bit. I was also impressed with The Iron Maidens‘ stage show and extra lights. Most bands that play at The Rockpile don’t even put up a banner likely due to the triangular 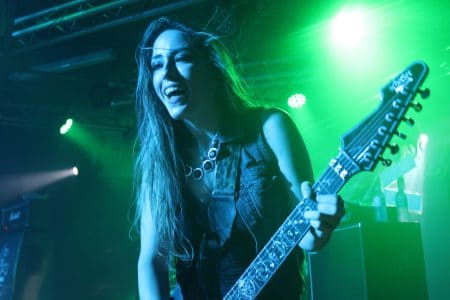 shaped stage but The Iron Maidens had a large banner, some “posters” covering some of the amps, extra lights at each end of the stage and other trinkets to make their stage setup special.

The encore segment gave me a chuckle as Rosenberg, Cox, Stringfield and Ortiz all left the stage to presumably wait outside (the stage exit door is right next to the entrance at The Rockpile) while the crowd was told to cheer loudly if it wanted to hear one more song from The Iron Maidens. The one band member that couldn’t easily exit the stage was drummer Linda McDonald who was kind of stuck at her kit given that exiting the stage would necessitate her to squeeze between her drum kit and the various amps on each side of it. Instead, McDonald elected simply to duck behind her drum kit but I could still see her from my vantage point from the front 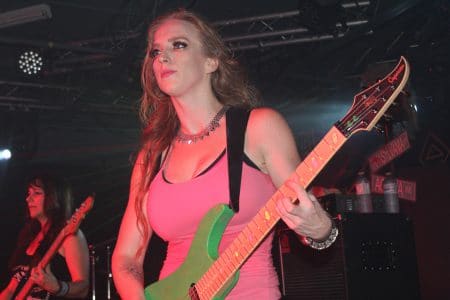 row. She smiled at me while putting one finger over her mouth to seemingly say, “Don’t tell anyone!” as obviously The Iron Maidens were going to play an encore no matter what. Eventually, the rest of the band members made their way back on stage for a rousing rendition of “Iron Maiden.”

Now, not everything was perfect though on this night as I thought that the background vocals supporting Rosenberg on certain songs needed a little bit of work. In particular, the background vocals on “Can I Play With Madness” seemed a little soft and slower than they needed to be. But that is almost nitpicking at this point because overall, The Iron Maidens put on a stellar performance and had me thoroughly entertained and singing along the entire night. 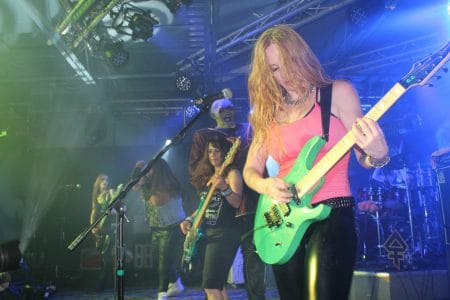 The Iron Maidens performing “The Number Of The Beast” at The Rockpile in Toronto, Ontario, Canada on June 17, 2017: