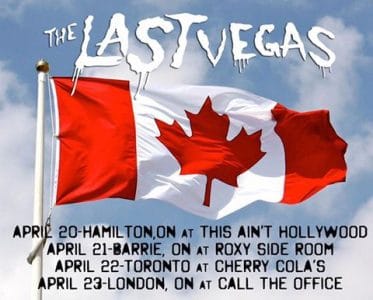 The Last Vegas were scheduled to play four shows in four nights in the province of Ontario and I would be damned if I would miss out in that regard. I had originally planned on catching The Last Vegas play at Cherry Cola’s in Toronto (which will occur tonight) with Sleaze Roxx writer Mark Hovarth but my parental duties nixed that plan. I then considered going to see The Last Vegas play at the Roxy Side Room in Barrie (which is about one hour north of Toronto) with new Sleaze Roxx writer Metal Mike but he would not commit when I proposed it to him. Accordingly, I chose to see The Last Vegas at This Ain’t Hollywood in Hamilton (about 45 minutes west of Toronto). Sleaze Roxx writer Eduardo was supposed to accompany me but  could not resist the lure of a female and he still had the option to catch The Last Vegas in Toronto two nights later. As it turns out, my friend The Meister from “rival” website Decibel Geek was planning on attending so I looked forward to catching up with him there.

With so many people on the Sleaze Roxx “Canadian roster” planning on seeing The Last Vegas live and the group having received ample coverage on Sleaze Roxx since 2009, I am slightly embarrassed to say that The Last Vegas are simply a band that has for the most part flown under my radar. When I first started visiting the Sleaze Roxx site about ten years ago, I started going through the site’s Top Ten Albums of the Year lists looking for new music to listen to. One of the albums that I picked up was The Last Vegas‘ Whatever Gets You Off given that it landed the #1 spot on Sleaze Roxx’s Top Ten Albums of 2009. While I always enjoyed listening to the album, it was always on my iPod so I never really paid attention to the songs — if that makes any sense. That is actually one of the reasons why I always like to get the physical copy of an album. Accordingly, even though I have had the Whatever Gets You Off album for years, I still can’t really recognize any of the songs. In the last few years, Sleaze Roxx writer Mark Hovarth had been singing the praises of The Last Vegas virtually every time I saw him but apparently his comments were falling on deaf ears. Given The Last Vegas‘ history with Sleaze Roxx (#1 album in 2009 and #9 in 2014 as well as #7 album in 2009 and #6 in 2012 for the Sleaze Roxx readers’ list), it made sense that I would go check the band out. In addition, new Sleaze Roxx writer Metal Mike had just interviewed The Last Vegas‘ guitarists Adam Arling and Bryan Wilkinson.

I arrived a little before 10:00 pm at the venue which is aptly named This Ain’t Hollywood. All was eerily quiet in what seemed like a small town strip of stores along its main street. After first stopping at the wrong location — the Missions Services of Hamilton which seemed to be bustling with people outside — I found This Ain’t Hollywood partly due to the van and trailer parked nearby (presumably The Last Vegas‘ vehicles) and the loud music which could be heard from the outside. The opening act — whose names escapes me at this time — was playing a bunch of Judas Priest cover songs which sounded quite good. “Grinder” was the best track that I heard from them. Halfway through the opening band’s set, the group oddly changed singers and proceeded to play some original songs, which really were not to my liking and far removed from the Judas Priest songs that they were previously playing. 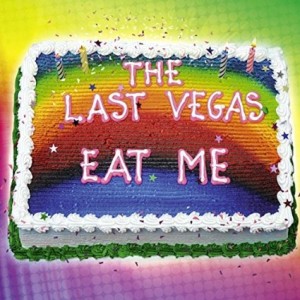 Some of The Last Vegas band members could be spotted walking around the club. After hanging out a bit with my friend The Meister and taking a quick look at the merchandise table (which would be hard to resist with six different The Last Vegas CDs for sale), I eventually introduced myself to guitarist Adam Arling who ended up being quite engaging and with a good sense of humour. Adam Arling told me, amongst other things, about some of The Last Vegas‘ previous Canadian tours. I was surprised to hear that The Last Vegas were one of the two opening acts for none other than Mötley Crüe in “Steeltown” (aka as Hamilton, Ontario, Canada) back in 2009. What was astonishing to me was that I attended that very Mötley Crüe concert but missed the opening acts or at least the first one which I presume would have been The Last Vegas. The ride to Hamilton that fateful night in 2009 was out of my control but it was a definite opportunity lost in any regard! Adam Arling also sort of poked fun at the very colourful cover of The Last Vegas‘ new album Eat Me. At the very least, I have to agree with him that the album cover definitely stands out! Before long, Adam Arling advised that he had to “go to work” and he was off! 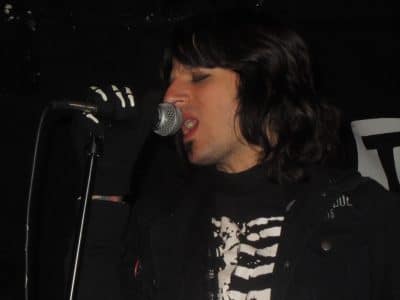 Eventually, The Last Vegas were all up on stage and kicked things off with “Bloodthirsty” from their new album. Singer Chad Cherry was decked out in some sort of skeleton outfit complete with black gloves with what looked like a white skeleton on each. He seemed to have a jacket on for the entire night. It would have been interesting to see what his outfit looked like had he taken off his jacket. Bassist Danny Smash was wearing a jean jacket, white t-shirt, bandana and baseball cap on backwards which gave him a look a little removed from the rest of the band. Guitarist Bryan Wilkinson had what I imagine the “sleaze rock” look to be including many tattoos throughout his body. Guitarist Adam Arling looked tall and lean with his lanky frame. Drummer Nate Arling had long hair and a tank top and reminded me of what AC/DC guitarist Malcolm Young might have looked like if he played the drums. 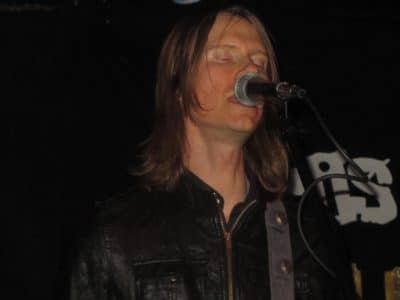 I can’t remember the last time I went to a show where I could not really identify any of the band’s songs. That being said, that was not an issue at all while seeing and hearing The Last Vegas play because I instantly liked every one of their songs except the one ballad — I’ve never been crazy about ballads — that they played on this night. In addition, the group sounded really good which made all the songs pleasurable to listen to even if I did not know them or not that well. While I always considered The Last Vegas as a “sleaze rock” group in the past — likely due to their unquestionable success when it comes to Sleaze Roxx’s year-end best of album lists — the band’s sound was actually closer to ’70s rock just like Bryan Wilkinson had described in his recent Sleaze Roxx interview. Although I enjoyed all the songs played by The Last Vegas, there were a few that really stood out and to my surprise, they all came from The Last Vegas‘ new album Eat 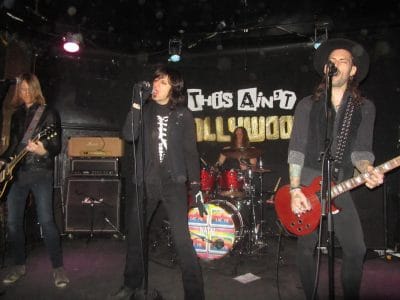 Me. The three tracks that really stood out were “Bloodthirsty”, “Along For The Ride” and “Voodoo Woman.”

As it turns out, The Last Vegas played tons of new tracks from their new album Eat Me given that they played seven out of the eleven songs from that album. Four songs — “High Class Trash”, “Apologize”, “I’m Bad” and “Whatever Gets You Off” — were played from The Last Vegas‘ 2009 album Whatever Gets You Off and the title track was the encore for the night. Of note, the song “High Class Trash” also appears on The Last Vegas‘ 2008 self-titled album. Three songs — “Other Side”, “Evil Eyes” and “It Ain’t Easy” — were played from the group’s 2012 Bad Decisions album, two — “Come With Me” and “You & Me (You Never Know”) — from 2014’s Sweet Salvation album and one (“Raw Dog”) from 2005’s Seal The Deal. Speaking of that last 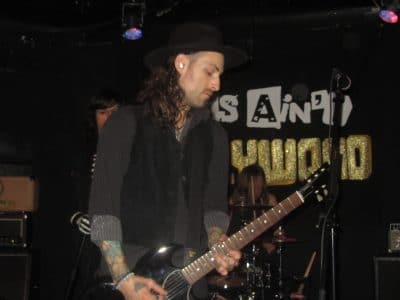 album, I was particularly pleased to have been able to purchase it for only $10.00 at the show given that the album or CD is selling for over $70.00 on Amazon’s Canadian site! I was surprised and grateful at the amount of songs played by The Last Vegas on this night with 17 in total.

After the show, The Meister and I ended up making our way to the merchandise table and we were able to chat with Wilkinson, Cherry and Adam Arling for quite a bit. Cherry was particularly kind giving The Meister and I each a guitar pick (that never gets old). We found out that Adam Arling and Wilkinson are or were roommates back in Chicago, Illinois, USA with Hessler‘s frontman Igz Kincaid and it was fun to hear a few stories about one of my favorite bands. Obviously, I could not resist purchasing the CDs on 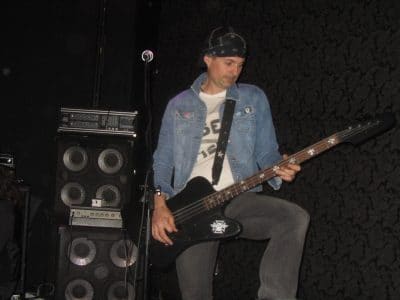 the merchandise table and I ended up buying five of the six CDs on display. I would have bought Sweet Salvation as well but just ran out of money! The Meister and I also ended up meeting one noteworthy passionate fan of music by the name of Jay who will no doubt be disappointed to hear that Roxy Blue are no longer playing at the upcoming Rock N Skull music festival.

In terms of the attendance at the show, it could have been better but it was a Wednesday night in a city that to me is not the greatest at supporting lesser known bands. I should qualify that when I say “lesser known band”, I am comparing The Last Vegas to such acts as Mötley Crüe and Black Sabbath which can draw very big crowds in Hamilton. The apparent lack of advertising by the venue for the show likely did not help either. Overall, The Last Vegas put on a kick ass performance and I was really glad that I was able to catch them play live. Since the concert, I have been spinning The Last Vegas‘ new album Eat Me and I got to say that it could well be a contender for the Sleaze Roxx’s Top Ten Albums of 2016. 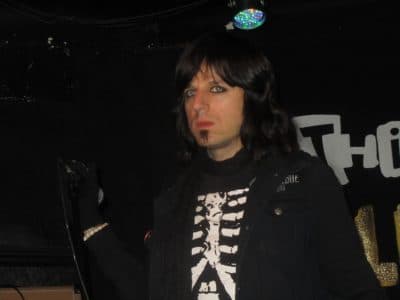