THE LAZYS PUT ON A HIGH ENERGY FILLED SHOW 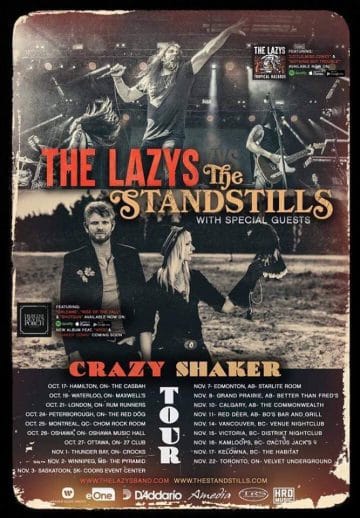 With some of my local favorite bands having either called it quits (Last Bullet) or in a state of flux (Diemonds), I am very grateful to having “discovered” The Lazys back in April of this year. Yes, of course, The Lazys have been around for quite a few years paying their dues in Australia before making the rather unprecedented move to all of places — Toronto, Ontario, Canada. Now, I had heard of The Lazys for a few years prior to April of this year but it wasn’t until seeing them in concert (opening for The Wild!) and literally been blown away that I really started getting into their music. Super impressed with The Lazys‘ performance at Lee’s Palace in Toronto opening for The Wild!, I ended up purchasing their newly released album Tropical Hazards. Five days later, I couldn’t resist and drove 45 minutes to catch The Lazys play live again, this time at the city affectionally known as “The Hammer.” At that time, I picked up The Lazys‘ prior self-titled album and their The Younger Years (2007-2011) compilation album. Although the album The Lazys had a few absolutely stellar tracks (such as “Black Rebel” and “Shake It Like You Mean It”), the overall song quality wasn’t as good as Tropical Hazards.

One of the theories that I have heard from bands in the past is not to play your hometown area too many times in a year as this playing too often will eventually negatively impact the amount of people that attend the shows. With that theory comes the assumption that playing less will create some sort of buzz when a band eventually does play a gig in its hometown area. Luckily, The Lazys do not seem to subscribe to that theory and appear to be throwing caution to the wind by repeatedly playing their new hometown of Toronto and the surrounding areas. That also means that this would be my fourth time seeing The Lazys this year within an hour’s drive (or so) from Toronto. Granted, there were a few occasions when The Lazys played in Toronto or nearby (such as in Oshawa last night) this year that I have skipped, partly because it wasn’t convenient and I had other plans. Perhaps if The Lazys had only played once before within the GTA (greater Toronto area) this year, I would have been compelled to go see them when they last played Toronto (a free show when they were filming their video for “Little Miss Crazy”) or in Oshawa last night.

Nevertheless, I believe that bands that play their hometown area more often will eventually gain a bigger following given that they are giving more opportunities for people to see them live and a better chance to gain momentum. A few examples would be KISS when they started out playing to a handful of people in New York City, Twisted Sister who gained a rabid following in the Tri-State area or even more recently Steel Panther paying their dues playing cover songs in Hollywood, California. In any case, the bottom line is that I am grateful that The Lazys were doing their second cross country tour of Canada this year, especially with Last Bullet‘s demise and Diemonds not having played a concert since back in October 2017 (which I happened to catch in Mississauga, Ontario).

Given that travelling on a Friday evening from Toronto to Waterloo can be a long process — and the later, the better to avoid rush hour traffic — I contacted The Lazys‘ frontman Leon Harrison to find out roughly when the band would be playing. I was hoping that The Lazys would be on last given that as previously mentioned, the later, the better to avoid rush hour traffic. Leon advised me that I would be “safe” if I arrived by 10:00 pm and The Lazys would indeed be the last band for the night. After taking care of all my parental duties (mostly as a chauffeur to and from various kids’ activities), I ended up only leaving at around 8:50 pm, which was definitely later than I anticipated. Luckily, traffic was very good and I made it to the venue shortly before 10:00 pm. It turns out since I imprudently elected to buy a ticket at the door and after the show, noticed a Facebook post from The Lazys advising that their gig at Maxwell’s was sold out. A friend of mine had indicated the night before that he would be attending as well but as I scoured the packed room, I could not see him anywhere so decided to just make my way to the front as close as possible to the stage without being an asshole about it.

At first I thought that I would have the chance to catch The Standstills since their banner with their name was up on stage but before long, it was taken down and replaced with The Lazys‘ banner. Before long, The Lazys consisting of Harrison, lead guitarist Matty Morris, rhythm guitarist Liam Shearer, drummer Andy Nielsen and their mystery temporary fill-in bassist 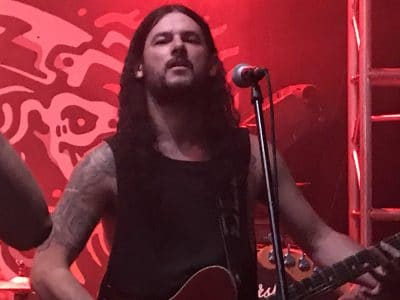 (whom I had seen perform with the band in Port Colborne back in early August of this year) took to the stage after a rather bizarre hip hop styled song on the PA. I was curious to see what song that The Lazys would open with having seen them open with “Picture Thieves” back in April and August 2018. This time around, it was probably my favorite song from the band — “Howling Woman” — from the group’s self-titled album. From there, The Lazys mainly alternated playing songs from their two latest albums — the self-titled one released back in 2014 and this years’s fantastic Tropical Hazards. The crowd was a good mix of young and old with young of course being relative to yours truly. So there were definitely more young people than older ones, which is a good sign for the band going forward.

Harrison had cut his hair, which was now shoulder level instead of almost waist length. The singer was also sporting a slimmer frame having seemingly lost a few pounds since the last time I saw 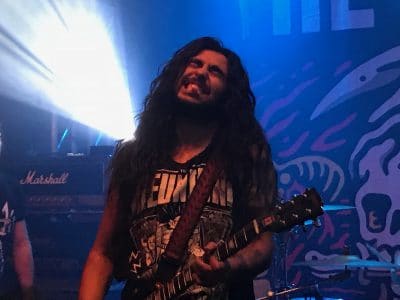 him about two months ago. In any case, Harrison looked good and was doing all sorts of leaps and jumps throughout the evening. The stage wasn’t the biggest given that the group was playing Maxwell’s‘ “small room” but Harrison, Morris, Shearer and the mystery bassist handled the limited space quite well with only one bumping incident that I witnessed. Matty Morris is the quintessential guitar hero and had more poses and moves (all accompanied by entertaining facial expressions) than just about any “younger” guitarist that I have ever seen. I have to say that I was quite impressed when he played part of a guitar solo with the guitar behind his head. Shearer seems to be the band’s Malcolm Young — steady and poised throughout the evening delivering the underrated but yet so important rhythm guitar playing — to let Morris shine. Drummer Andy Nielsen was all smiles during the evening and sported an even bigger one when a fan brought him a beer. 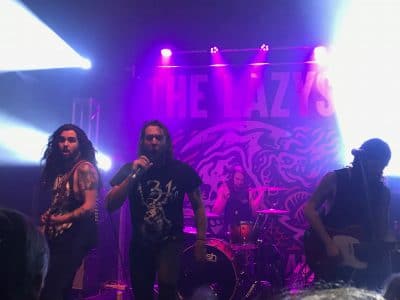 good portion of the night. It was funny to see one fan holding onto the mystery bassist’s leg for a huge chunk of one song but the tattooed bassist never missed a beat. If The Lazys‘ long-time bassist Glenn Williams (whom I believe may be stranded in Australia perhaps due to visa issues — pure speculation) doesn’t make it back, the band’s current replacement is more than able and then some.

There were really no down moments during The Lazys‘ set given that the songs in their setlist were upbeat and oh, so good. The Lazys delivered a rockin’ set from start to finish. Clearly, “Shake It Like You Mean It” seemed to get the best response. The Lazys played four out of what I consider to be the “big five” songs off their new album Tropical Hazards. “Picture Thieves,” “Little Miss Crazy” and “Nothing But Trouble” always seem to be in the group’s setlist (and rightfully so) but this time, “Half Mast Blues” made its way as well. Sadly, The Lazys‘ “Take Back The Town” wasn’t played but that was no surprise given Harrison and Morris‘ lukewarm enthusiasm towards that song when I interviewed them back in May of this year. It’s hard to pick one song that stood out above the rest but I really enjoyed “Black Rebel” from the group’s self-titled album. 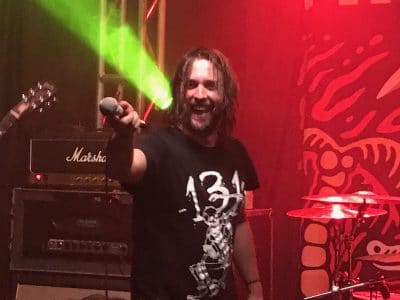 One thing that I have found odd at The Lazys‘ headlining sets (both in April and again on this night) is that the encore is what I consider to be a rather obscure song from their self-titled album and to be honest, the weakest song in the set — “Love Your Gun.” Nevertheless, that is the track that The Lazys chose to close their headline set. At the end of the day, it didn’t matter as the group put on one fantastic set.

After the show, I quickly looked around for my buddy who was nowhere to be found. I was admittedly very happy that Maxwell’s runs a tight ship as The Lazys‘ set was done at around 11:17 pm meaning that I would get home at a decent hour. This guaranteed that I wouldn’t have to suffer too much the next day due to sleep deprivation and since I would most likely be up by 7:00 am courtesy of my youngest child. Probably the best part about The Lazys‘ Crazy Shaker Tour is that I will still have one more opportunity to see them play on this tour since they end things off with a stop in their new adopted hometown of Toronto, Ontario on November 22nd. 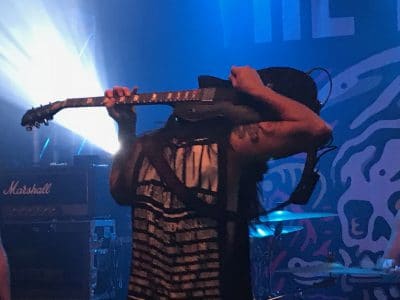 The Lazys performing “Nothing But Trouble” at Maxwell’s in Waterloo, Ontario, Canada on October 19, 2018:

The Lazys Performing – Nothing But Trouble – October 19 – 2018 at Maxwell’s – Waterloo, Ontario – Sierra Pilot and The Standstills opened

The Lazys performing “Love Your Gun” at Maxwell’s in Waterloo, Ontario, Canada on October 19, 2018: