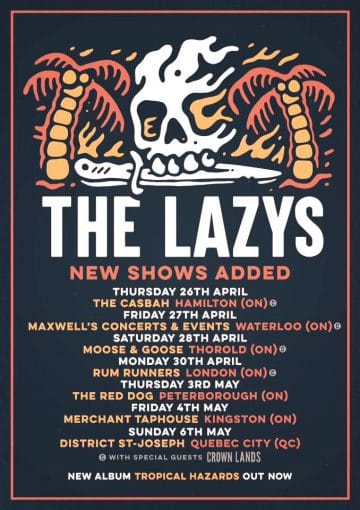 After quite simply being blown away by The Lazys‘ live performance at Lee’s Palace in Toronto, Ontario, Canada last week, I was very pleased to see that the band was going to be doing a string of headline shows throughout the southern part of Ontario as soon as their tour supporting The Wild! on a cross country tour of Canada was over. I simply couldn’t resist seeing them play live again so I made the 45 minute trek or so to the City of Hamilton, affectionately known as “The Hammer” or “Steel Town.” The Lazys were bringing new greater Toronto area local favorites, Crown Lands, with them on their first four headline shows so I was excited to see the two man band play for a third time this year.

Unfortunately, I got delayed in leaving Toronto and ended up arriving just as Crown Lands were playing their last song — a blistering rendition of the Rush classic “Working Man” — complete with a well received drum solo from drummer / lead vocalist Cody Bowles. I had never been to The Casbah before so did not know what to expect. When I arrived at the venue, the place looked deserted but I saw that there was a back room to head over to. After presenting my purchased ticket on my cell phone, I made my way inside. There were probably 40 to 50 people inside the darkened room that had a bar at the back. Unfortunately, the stage had a perhaps half a foot elevation compared to the rest of the floor so my sightline to the stage would definitely be impeded unless I was standing up front. For Crown Lands, I was about three rows back with limited viewing, which really wasn’t going to cut it for seeing The Lazys. Luckily, the crowd dispersed somewhat after Crown Lands‘ set ended and I was able to get an excellent up front spot to watch The Lazys play.

It must be frustrating and somewhat odd for bands to play one venue to the next. At Lee’s Palace the week before, the 550 capacity venue felt packed when The Lazys were performing. The turnout exactly a week later at The Casbah was definitely much lower although the people that were there seemed quite into The Lazys. I remember doing an interview with Canadian glam rockers Rusted almost four years ago (time flies) and guitarist Tom Eagle stated to me during that interview more or less that he’d rather play to 25 passionate fans than a place full of indifferent people. If that’s the case, The Lazys were definitely 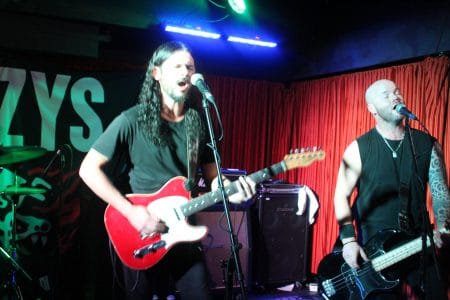 going to have a great show. Funny enough, I learned the next day that The Lazys‘ show at Maxwells in Waterloo, Ontario, Canada was nearly sold out with over 300 tickets sold. Go figure. It’s definitely tough to gage how many people one show will draw compared to another.

Similar to their previous gig at Lee’s Palace, The Lazys came out firing with one rocker after another. Having immersed myself with The Lazys‘ latest album Tropical Hazards all week long, this time I was familiar with a good chunk of their songs. “Picture Thieves” was a great opener and had the crowd going right away. It was interesting to see lead vocalist Leon Harris perform from up close as he seemingly had his eyes closed when singing a large portion of the lyrics to the opening song. “Howling Woman” from The Lazys‘ self-titled album was next and one of the four songs that I knew from that record. Funny enough, when I posted the video for the song almost two years ago in an article on Sleaze Roxx, the track hadn’t made that much of an impression on me but now it’s one of my favorite songs to listen to. In any case, The Lazys‘ live rendition of the song was simply awesome. Clearly, The Lazys were going to let the music do the talking as they launched into new track “Little Miss Crazy” without saying much to the crowd.

The Lazys performing “Picture Thieves” at The Casbah in Hamilton, Ontario, Canada on April 26, 2018:

While The Lazys certainly did get quite a few cheers from the small but enthusiastic crowd, there could have been some cricket like moments while the band settled in from one song to another but given the group’s experience, one band member or another would keep the noise going — may it be drummer Andy Nielsen laying a simple drum beat or may it be lead guitarist Matty Morris playing a guitar riff — so that there never were any quiet moments. I thought this was the moves from a band that has had plenty of live shows under its belt and know what to do to keep the party going and avoid those deathly quiet moments that can creep up at anytime. 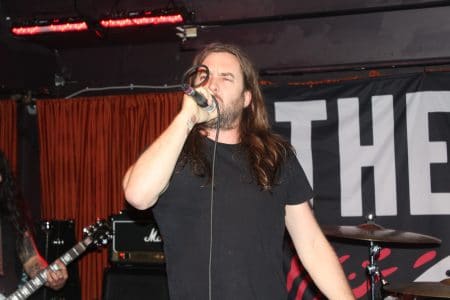 The party just kept on rolling with The Lazys‘ latest single “Nothing But Trouble” and their anthem “Black Rebel.” Both Harris and Morris took turns addressing the crowd. Morris referred to the City of Hamilton as “The Hammer” which drew some cheers from the audience. Harris noted that the former Australia based rockers didn’t know much about hockey but the Toronto Maple Leafs losing [in game seven to the Boston Bruins] had to suck. Funny enough, although The Lazys‘ singer claimed that the band members didn’t know much about hockey, they had enough ingenuity to have pucks for sales with their new album logo on them. I think it’s the first time that I see a band sell such a item and I thought that it was a cool idea. I didn’t end up getting a puck though as I focused on purchasing the group’s two earlier albums to complete my collection. A pair of rockers from the new album Tropical Hazards followed with “Louder Than Youth” and “Can’t Kill The Truth.”

From there on, I found The Lazys‘ choice of songs aside from the set closer “Shake It Like You Mean It” to be rather interesting. The group’s earlier material definitely sounds very old school AC/DC to me and more rough around the edges. Perhaps it was to please the crowd by playing older material but I would have loved to hear more songs from the new album Tropical Hazards such as standouts “Half Mast Blues” and “Take Back The Town.” In any case, I found the songs “Authority” and encore “Love Your Gun” (the latter which I believe Harris advised writing when he was 12 years old) to be more aggressive and rough around the edges type rock n’ roll. Not bad songs by any means but I guess I just love The Lazys‘ new album so much that I would have liked to hear more from that album. 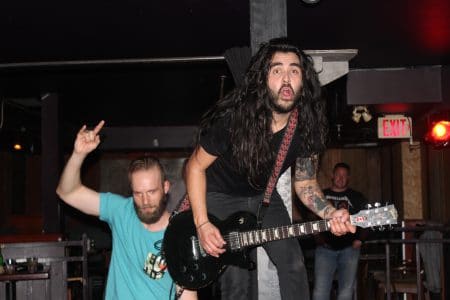 Towards the end of the show, Morris made his way to a table in the back of the venue and proceeded to stand on out while playing a solo. The table was quite unstable so a fan was holding it during the entire time that Morris was standing on top of it. I thought that it was pretty funny to see. It was cool to see Crown Lands‘ guitarist Keith Comeau looking intently at Morris wile the latter was up on the guitar playing. It almost seemed like Comeau was studying his guitarist peer. After the set closer “Shake It Like You Mean It”, all of The Lazys‘ band members except Nielsen quickly made their way off the stage and into the adjacent room. Clearly, the group was going to come back to play at least one more song and Nielsen eventually decided to join his bandmates in the adjacent room. Subsequently, the audience could see an arm from the door separating the two rooms motioning for some cheers for The Lazys to get back on stage. The crowd was happy to oblige and The Lazys closed off the night with “Love Your Gun.”

After the show, The Lazys band members all seemingly came out to shake people’s hands and thank the people for coming out to see them. Again, I don’t think that I’ve ever seen that before (or likely I have never stuck around long enough to witness that  happening) and I thought that it was a nice touch from the group. I always love seeing down and dirty rock n’ roll played in a smaller venue with an enthusiastic crowd and I felt like I got exactly what I was hoping for from The Lazys on this night. Too bad that I am going to the M3 Rock Festival next week or else I’d be heading to Peterborough to catch The Lazys play again because they are that God damn great live! 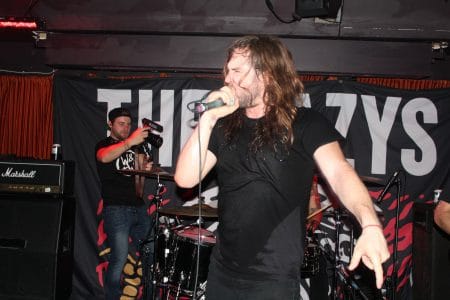 The Lazys performing “Love Your Gun” at The Casbah in Hamilton, Ontario, Canada on April 26, 2018: