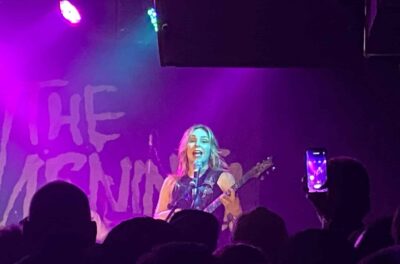 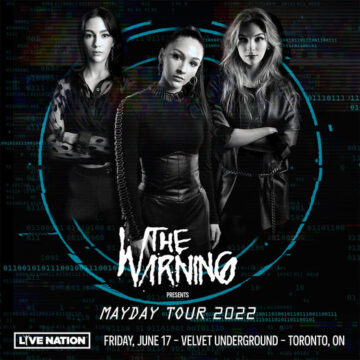 Although I knew that I would be missing hot newcomers The Warning at the Sound of Music Festival in Burlington, I also knew that the Mexican female rockers were also playing a headlining gig the next night at the cozy Velvet Underground in downtown Toronto, which is about 45 minutes away from Burlington. I had only become aware of The Warning back in late May of this year while listening to music / watching videos on YouTube. I can’t recall which song or video that I first heard from the three sisters —Daniela “Dany” Villareal (vocals, guitars, piano), Paulina “Pau” Villareal (drums, vocals, piano) and Alejandra “Ale” Villarreal (bass, piano, backing vocals) — but I was so impressed that I posted an article about them on Sleaze Roxx. I started checking out more and more videos relating to the group and came across a neat one titled Evolución which showed the sisters’ musical evolution over more than a decade from 2011 to 2021.

I then decided that I was going to purchase some of their music but purchasing CDs from their website turned out to be a bit complicated since there were no orders being shipped while the sisters were on tour. I presume this is the case because the sisters handle all the orders themselves. In any case, I didn’t end up purchasing any of their CDs so I really was not familiar with any of their songs going into their concert at the Velvet Underground. I can’t recall ever going to a concert to see a band and not knowing any of their songs so this was going to be a first. I checked out the Velvet Underground‘s website, which indicated that The Warning would be playing at the rather early time slot of 9:00 pm with the opening act beforehand. Given that I didn’t have much time to waste and to “hang out” waiting and waiting for The Warning to play, I decided to call the venue and confirmed that the band was indeed scheduled to start playing at 9:00 pm.

I showed up at the Velvet Underground a few minutes before 9:00 pm and there was a sizeable crowd on hand. I was about 20 rows back without starting to push / squeeze my way to get closer to the stage. Unfortunately, the sight lines inside the Velvet Underground aren’t the greatest. In fact, they kind of suck unless you’re within two rows of the stage since the venue is square / rectangular shaped with a low ceiling and the stage is seemingly only one to three feet above the general admission floor. Given that the three (or at least two of the) Villarreal sisters aren’t particularly tall, it was quite difficult seeing them on stage. In any case, there was seemingly a cool buzz from the crowd, which was made up of a much younger crowd than the ones that I am used to seeing when attending concerts from bands (such as Tom Keifer, L.A. Guns and Faster Pussycat last month) whose heyday was back in the late 80’s / early 90’s. 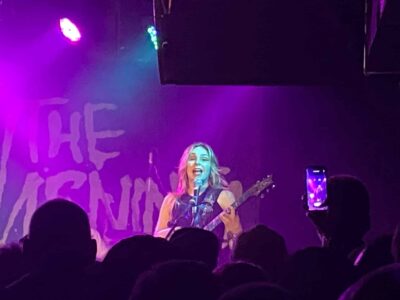 While I had enjoyed some of the songs that I had heard from the group via YouTube a couple of weeks prior, those tunes were mainly played as “background” music so I really wasn’t paying that much attention aside that I wanted to acquire the band’s music and thinking Sleaze Roxx readers might dig them. In any case, you could tell The Warning band members were excited to be playing the Velvet Underground in Toronto. Lead singer (and guitarist) Daniela Villarreal was all smiles and clearly looking like she was having a lot of fun on stage. Bassist Alejandra Villarreal, whom I understand is the youngest of the three sisters, seemed more subdued but I think that had to do more with her seemingly shyer personality than anything else. It was quite difficult for me to see drummer Paulina Villarreal from my vantage point but I believe that she addressed the audience a couple of times and I could sometimes see her drumsticks swinging away.

The Warning‘s songs were often easy to singalong to and I found myself joining in many times even though I might have not quite gotten the lyrics quite right. The only song that I found to be quite disappointing was ironically the band’s cover of the Metallica classic “Enter Sandman.” At first, I could hardly recognize the song because the group had slowed it down so much. I would have never thought that someone could ruin that song but that cover didn’t sit well with me at all. What should have been 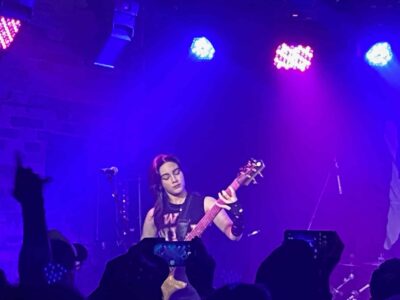 a highlight of The Warning‘s show turned out to be the low point. Towards the end of The Warning‘s set, Daniela Villarreal announced that the group would be coming back to Toronto in the fall (I think) as the opening act for Three Days Grace. Unfortunately, The Warning seem to be in the same boat as Halestorm where they tour with acts such as Three Days Grace, which I am not really into. I was happy to hear that they are landed such a cool tour and also have noticed that they are currently criss-crossing the States while opening for Halestorm and The Pretty Reckless. Clearly, The Warning are a band on the rise and I would be very surprised if they were still playing a small venue like the Velvet Underground the next time they play a headlining set in Toronto.

The Warning‘s set was pretty quick as I think that I was out of the venue sometime between 10:00 and 10:10 pm. That was certainly the earliest that I had ever left a concert after going to see the headlining act. In any case, I was happy that I got to see The Warning play in such an intimate venue. I still have yet to acquire any of their music but hope to do so in the near future. 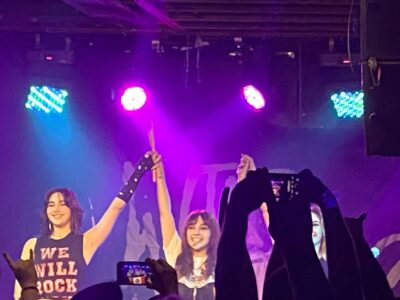