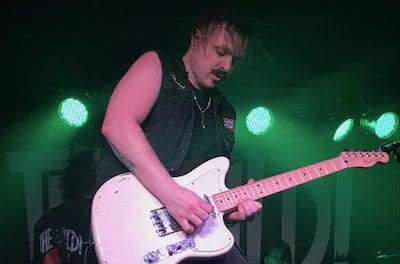 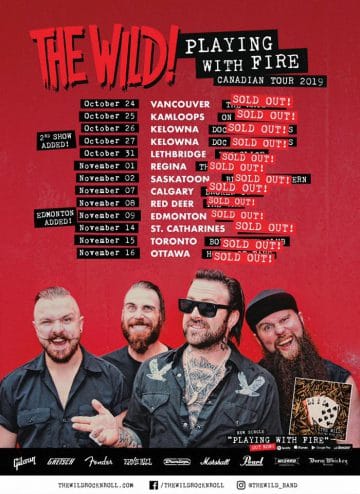 It’s not very often that I get to see a concert in a new town that’s close to Toronto, Ontario, Canada but that’s exactly what was going to happen on Thursday, November 14th as I was scheduled to go see Western Canadian rockers The Wild! perform at the Warehouse Concert Hall in St. Catharines, Ontario, Canada. I was actually excited to check out the Warehouse Concert Hall as I had noticed that quite a few bands were seemingly playing that venue in the last year. The Facebook page for The Wild!‘s concert in St. Catharines indicated that the doors were opening or perhaps the concert was starting at 8:00 pm. I knew that there were two opening bands so anticipated that The Wild! would be on by 11:00 pm and certainly 10:30 pm at the earliest. It wasn’t that I didn’t want to catch the two opening acts — Drop Top Alibi and Revive The Rose — but I knew that I had at least an hour’s drive to the venue and some parental duties (i.e. chauffeur) to take care of beforehand. I ended up leaving Toronto at around 9:30 pm and although I made it to St. Catharines in excellent time (about one hour from door to door), I wasted a little bit of time searching for and parking at the wrong venue. That turned out to be costly because The Wild! were already playing when I stepped foot into the Warehouse Concert Hall. Ugh. I hate that when that happens.

Based on the setlist for The Wild!‘s show in Ottawa, Ontario, Canada two nights later (as per setlist.fm), I believe that I missed the first two songs from The Wild!‘s set. Sadly, they were two good ones — “Roadhouse” and “Best In The West” — but there was 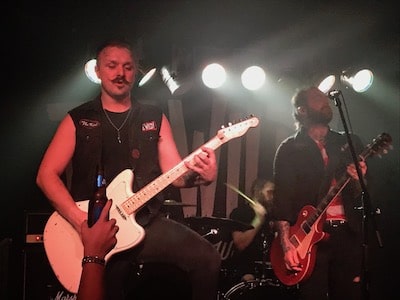 nothing that I could do about it except leave earlier from home next time. I noticed that The Wild! posted a message on Facebook the day after the concert indicating that their St. Catharines show sold out but it certainly didn’t feel like a sell out when I was there. It felt like the room in question (or the “concert hall”) was half empty and there was lots of room between concert attendees. In any case, I am not sure exactly what is deemed a “sell out” at that venue so will give the benefit of the doubt to The Wild! in that regard. It’s not the first time that I go to a concert where it’s announced as “sold out” even if it really doesn’t feel like it. Eventually, The Wild! declared that their entire tour sold out and if that is indeed the case, I am happy for them!

From The Wild!‘s latest promo pictures, it appeared that the band experienced a drummer change but I wasn’t totally sure. However, once at the venue, I was able to confirm that there had indeed been a change in drummer as Reese Lightning was no longer behind the drum kit and as I would find out while writing this review, the new drummer was Crash Anderson. I don’t remember seeing any announcement from The Wild! about their change in drummer but that is kind of typical for the band. When I interviewed The Wild! frontman Dylan Villain back in April 2017 and asked him what happened to rhythm guitarist 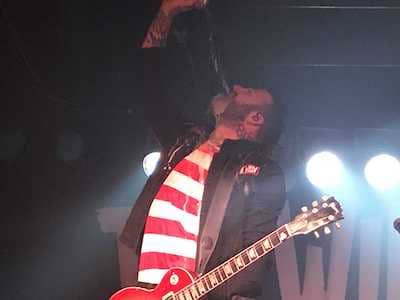 Pistol Pete who had been replaced by The Kid, Villain answered by stating, “That’s definitely not something that I’m willing to discuss.” I just did a quick search on Facebook to see if The Wild! announced their drummer change and came across this rather succinct message from the band on April 24th: “We left our vests in Charming, CA. We also have a new drummer. Next question…”. In any case, Anderson proved to be a welcomed addition and he even got the crowd going by himself by brandishing his fist in the air midway through the show and getting a good portion of the crowd to do the same.

What I have always really liked about The Wild! is the choreography between Villain, The Kid and bassist Lucas “Boozus” as they always do a lot of headbanging moves in unison which is really cool to watch. For many, you might think of KISS performing their song “Deuce” in that regard and while The Wild! have not come up with something truly original, it’s the first time that I see such choreographed moves in a live setting. Whatever the case, I always love seeing The Wild! do all their choreographed moves. It gives you the feeling that there has been some preparation to give the audience the very best that the band has to offer. I believe that during the song “Slow Burn” (or perhaps another one), Villain, The Kid and Boozus all slowly walk together again in a choreographed fashion, which added some fun to the track. 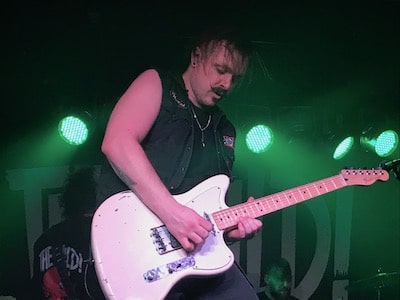 Given that The Wild! were playing a smaller venue this time around as the headliner, they had a much longer set than usual so that was a real treat. Having arrived at the start of The Wild!‘s third song, it wasn’t difficult to make my way close to the stage. I always like when the stage has a bit of height to it and the stage was placed at head level for the concert attendees so I suspect that everyone had a clear view of the stage and the band. Even though The Wild! only have two albums to their resume — the EP GxDxWxB (2015) and Wild At Heart (2017) — they have a lot of great songs to play in a live setting. They have so many great songs actually that I didn’t really care to hear any covers from them. Funny enough, the two songs that I enjoyed the least were “Attitude” (The Misfits cover with Boozus on lead vocals) and “Razamanaz” (Nazareth cover) assuming those were played in St. Catharines as I am going by The Wild!‘s setlist at the House of Targ in Ottawa two nights later to reconstruct the band’s setlist in St. Catharines. I should point out that I am not really a fan of either The Misfits or Nazareth so can’t say that I recognized those two covers assuming they were played in St. Catharines.

I was a tad bitter checking out the setlist for The Wild!‘s Ottawa show two nights later because it included a cover of the Beastie Boys‘ classic “Fight For Your Right (To Party).” I don’t know why The Wild! didn’t include that song in their set in St. 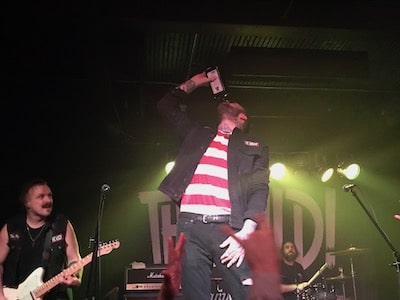 Catharines but it was a downer to see that it could have been included but wasn’t for whatever reason. The other cover song that was played by The Wild! in St. Catharines was a solid rendition of AC/DC‘s “If You Want Blood, You’ve Got It.” The rest of The Wild!‘s setlist was interesting (assuming that I am right) as the band played all of the seven songs from its debut EP GxDxWxB, only four from Wild At Heart and presumably four new songs (“Helluva Ride”, “Playing With Fire”, “Goin’ To Hell” and “Bad News”). If the new songs are any indication of what The Wild!‘s next album will be like, there is no doubt that the band will have a real shot at bettering their year end finish on the Sleaze Roxx‘s top albums of the year. For those who don’t know, The Wild!‘s GxDxWxB finished at #2 on the Sleaze Roxx’s Top Ten Albums of 2015 and Wild At Heart also snatched the #2 spot for 2017’s year end list. Of note, Wild At Heart also finished at #15 on the Sleaze Roxx Readers’ Top 20 Albums of 2017, which is great as this means that the group is catching on and being recognized by the Sleaze Roxx readers, and since it’s hard for new bands to make the readers’ year end list, which tends to 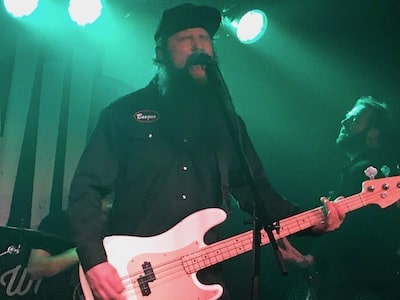 gravitate towards recognizing the efforts of the more established bands.

Out of the new songs played by The Wild!, my favourite was definitely “Goin’ To Hell” and I can’t wait for that one to presumably appear on the band’s next album, which I believe that Villain announced as coming out sometime in 2020. I get why The Wild! played all of the songs from their debut EP because that album is really excellent from start to finish. My favorites on this night though were the first two singles from Wild At Heart — “Ready To Roll” (which had the audience singing along to the chorus) and “Livin’ Free” — along with the slower numbers from the debut EP — “What About You?” and “Slow Burn.” The energy put out by The Wild! members was impressive. The Kid in particular is a bundle of energy jumping around whenever he got the chance no matter and even if a song might be a bit slower paced. 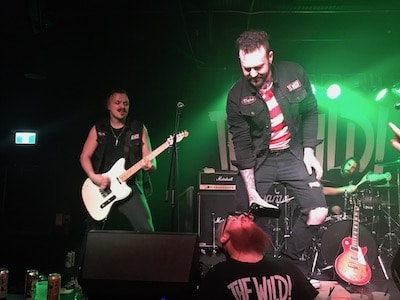 Now I can’t recall if I am correct on this one but I seem to recall that Villain told me a couple of years ago that he didn’t drink before going and while on stage. That definitely wasn’t the case on this night as the shots were flowing up on stage and Villain even brought a bottle of hard alcohol and poured some of it in the mouths of a few very willing concert attendees. Once the bottle was empty, Villain ended up reaching up high and placing it on one of the ceiling’s beams. I imagine that someone from the venue had to get a ladder to retrieve that empty bottle. Villain addressed the crowd on a number of occasions pointing out that the band had been in existence for seven years and that it had been four years (I believe) since the group played in St. Catharines. Obviously, The Wild! are doing something right with their sold out headlining tour across most of Canada. Overall, The Wild! put on a great show. I was pleased that The Wild! ended up playing almost for two hours and that the evening ended at just before Midnight. It took me another hour to get home but at least I got in at a decent time to get some sleep before the coming work day. 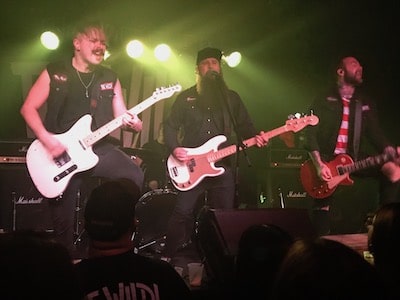