WHEN IS HALESTORM PLAYING?

This concert event was a fine example of my being out of touch with which music is most popular these days. When both my friend Eduardo and I heard that Halestorm were playing at the TD Echo Beach in Toronto, we both assumed that the group would be headlining that gig. There were two other bands on the bill, Three Days Grace and Big Wreck, and although both names were familiar to me, I could not name you or even hum any of the songs that they played. No need to say that Eduardo and I were specifically going to see Halestorm play on this night!

As we were walking from the parking lot to the TD Echo Beach venue, we could overhear the opening band wrap up its set. Although the song sounded a little bit familiar, I could not make out what the song was and thought nothing more of it. We arrived at around 7:45 pm or so and the outdoor venue was already quite packed with people. Aside from two small VIP areas on the side and an even smaller wheelchair accessible area, TD Echo Beach was laid out as one big and long general admission area. Depending on where you were, you might be standing on concrete or sand — yes, sand. Although we had missed the opening act, we were still able to make our way through the crowd and got within five or six rows from the stage barrier. 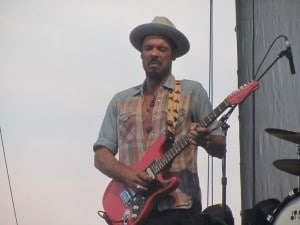 The first band to appear was Big Wreck which consisted of a bassist, a drummer and three guitarists including one handling lead vocals. They sounded pretty good during their first song. I was very surprised when I was quite familiar with the group’s second song played having heard it on the radio quite a few times. “That Song” definitely increased my interest in Big Wreck‘s set and also really seemed to get the crowd going. Unfortunately, I did not really like any of the other songs that they played feeling that they sounded more “alternative” than what I usually listen to. Most of their songs with the varying tempos seemed to go from nice and heavy — which I enjoyed — to rather slow and sometimes lacking a bit of punch. There were a few exceptions along the way as I enjoyed the songs “Albatross” and set closer “The Oaf”, the latter of which I was apparently already familiar with. However, I thought that the live rendition of “The Oaf” paled in comparison to the studio version of it that I must have heard on the radio. 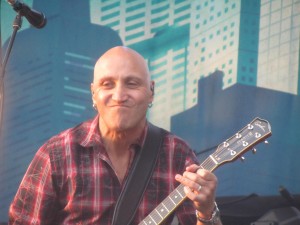 One thing that struck me during Big Wreck‘s set was that the three guitarists and the bassist (the latter only for the first few songs) seemed to be switching guitars after every song! It seemed a little excessive and I even saw the bassist decline a change in bass guitar between songs at one point. Lead singer and guitarist Ian Thornley did not talk to the crowd that much aside from sometimes giving the title of the song or stating “Echo Beach”. He did prior to the fourth song played mention that Halestorm were a “tough act to follow” which I found strange since Halestorm was supposed to close off the evening as far as I knew. What caused me some concern was that towards the end of Big Wreck‘s set, Thornley advised that Three Days Grace was coming up. At first, I thought that Halestorm would accordingly have a shortened headliner set since we were getting close to 9:00 pm and I suspected that the TD Echo Beach venue would have a similar 11:00 pm curfew as the nearby Molson Amphitheatre. But all of a sudden, I began to realize that Halestorm was likely the opening act that Eduardo and I had overheard while walking from the parking lot to the venue. We then started analyzing together what Thornley had previously said including that Three Days Grace was coming up.

A sick feeling overcame me as I checked my concert ticket and noticed that only Big Wreck and Three Days Grace were mentioned on the ticket stub. If Halestorm were headlining this event, their name would have definitely been on the ticket stub. As the stage was being set up for the next band, it was quite clear that Three Days Grace were next and they were in fact the headliner by the sheer amount of lights being set up. It was definitely a massive disappointment to realize that Eduardo and I had missed Halestorm‘s set in its entirety, especially since I had really enjoyed seeing Halestorm play live about one and half years ago. Sadly, we could have easily arrived at the TD Echo Beach venue in time for Halestorm‘s set had we realized that they would be opening the festivities. Rather, we made a conscious decision to arrive a little later since we were both seemingly unfamiliar with either Big Wreck or Three Days Grace. While still somewhat in denial, Eduardo and I discussed whether we should just leave or at least take in a few songs from Three Days Grace beforehand. Since we were just minutes away from Three Days Grace‘s set and had forked over more than $50 each to attend on this night, we decided to give the Canadian rockers a chance. 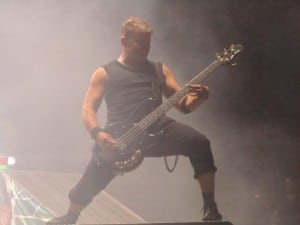 As the Three Days Grace band members made their way onto the stage, I noticed that one of the five band members was a keyboardist so subconsciously, I automatically had concerns about how the band would sound like. These concerns turned out to be for naught since I liked Three Days Grace‘s sound right from the opening song “I Am Machine” and frankly throughout their entire set. Lead vocalist Matt Walst, who was quite the energetic frontman, advised the audience that the next song would be “old school” Three Days Grace and I was very surprised and pleased that I knew the next track “Just Like You” quite well. Again, the power of radio was definitely at play here. Funny enough, the only time that I have listened to radio in the last couple of years is when driving my older model car and the reason is simply that my CD player was busted by one of my kids a couple of years ago. If I was driving a more recent model vehicle, I would simply be tuning in to “Hair Nation” via satellite so the likelihood of having heard Big Wreck or Three Days Grace would have been rather small. By the time that Three Days Grace finished playing their third song “Chalk Outline”, both Eduardo and I were in agreement that we would stay for Three Days Grace‘s entire set since the band sounded quite good on a first listen and really to salvage what was left of the evening. 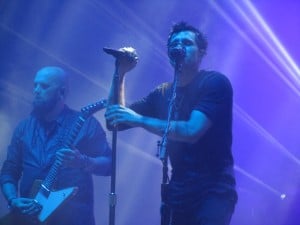 Salvage is not the proper term to describe what Three Days Grace did on this night. What the Canadian rockers did was put on a kick ass fantastic performance that left me very impressed with the group and definitely a new fan. The hero of the night has to be put frontman Matt Walst whose vocals were easy to hear and sing along to, who always seemed to briefly engage the crowd by addressing it between each song, who prompted many Three Days Grace chants from the audience and who definitely had the crowd going from the very first minute. The guy must be in great shape because he was constantly moving throughout the band’s over 90 minute set. He reminded me a bit of Kix‘s Steve Whiteman in terms of stage presence and energy albeit in a much more conventional way. Every song that Three Days Grace played seemed to provide a sing along opportunity during the chorus portion. After the show and in order to complete this concert review, I began reading up a little bit on Three Days Grace and found out that the Toronto based band had five studio records under their belt and Matt Walst had only “officially” been the group’s lead singer for over a year. This was quite the surprise as I thought that Matt Walst looked so natural up there leading the band that he must have been at that position for many more years. 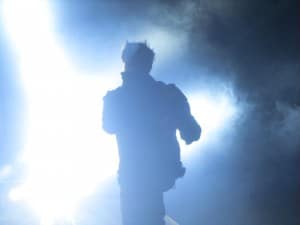 The whole band put on a great performance from bassist Brad Walst — who reminded me a bit of Metallica‘s bassist Rob Trujillo the way he moved on stage — to guitarist Barry Stock — who looked like he might fit better in some black metal gothic band with his shaved head and beard tied into a long knot. My favorite songs played from Three Days Grace were “Just Like You”, “So What”, “The Good Life” and the set closer “Riot”. This is definitely a band that I will be checking out and following in the future. While 80s style hard rock and heavy metal will likely never ever get back to its level of popularity from 25 to 30 years ago, it is nice to see a young band with a more modern sound kick ass onstage while playing easily memorable rock songs. If the future of hard rock is in the hands of Three Days Grace — and judging by the younger audience, it just might be — Gene Simmons‘ declaration that “rock is finally dead” will continue to be proven wrong for many years to come.