WE’RE NOT MISSING HALESTORM THIS TIME!

After this summer’s major gaffe with Sleaze Roxx writer Eduardo and I completely missing Halestorm‘s set due to assuming that the Pennsylvania rockers would be headlining over Three Days Grace and Big Wreck, Eduardo and I were determined to catch Halestorm play live once we got wind that the group would be playing some select Canadian dates this fall. As it turns out, Halestorm were once again touring with Three Days Grace and this time, Eduardo and I knew that Halestorm would indeed be the opening act. To ensure that we would not miss any of Halestorm‘s set, we decided to leave from Toronto towards Hamilton at 6:30 pm which would give us 90 minutes to make it to destination, which would be plenty of time to cover the 40 minutes trek that it should really take barring no traffic. Everything was running smoothly until we hit major traffic on the highway due to a motor vehicle accident while being only four kilometres way from destination. Luckily, we had time to spare and even though it took almost 30 minutes to get past the car accident, we made it to the venue with ten minutes to spare. 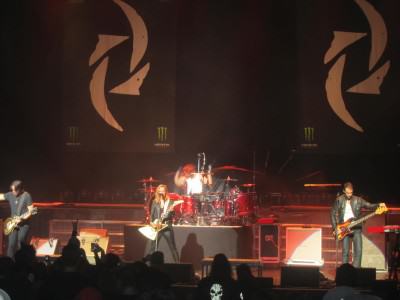 I have to confess that I was somewhat ambivalent on attending the concert once we got tickets because I had been so disappointed with Halestorm‘s latest album Into The Wild Life, especially when you compare it to the band’s prior and absolutely spectacular album The Strange Case Of... A few days prior to Halestorm and Three Days Grace hitting the stage at the Hamilton Theatre, I dug out both of Halestorm‘s last full length studio albums as a warm up to the concert. Once again, I was absolutely loving The Strange Case Of… and I struggled to finish listening to Into The Wild Life. Nevertheless, I was hoping that Halestorm‘s new songs off Into The Wild Life would translate better live than they did on the album. Halestorm hit the stage pretty much on schedule with their logo on two very large banners high up behind them. Presumably, Three Days Grace were being gracious headliners in giving lots of room to Halestorm to manoeuvre on stage and the opportunity to hang their banners way up in the air. I note that this was also the case when Three Days Grace had played at the TD Echo Beach in July 2015 when Big Wreck — the opening act for whose set Eduardo and I were able to catch — also had full use of the stage. Say what you will about Three Days Grace getting covered on the Sleaze Roxx website (more on that later) but they appear to be a generous headliner when it comes to providing ample stage room and set up for their openings acts. 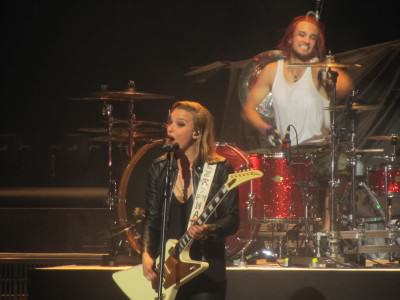 There are really two “stars” in Halestorm and it is none other than the Hale siblings. First of all, you have lead singer and guitarist Lzzy Hale who once again sported a look that I could only classify as a “classy yet sexy rock n roll look.” Sporting what appeared to be pretty tight black leather pants, a black leather jacket, an U-type t-shirt and some high heels, Lzzy Hale is the poster child for looking sexy and hot while not revealing that much skin giving her that classy element as well. The second star is of course Lzzy Hale‘s younger brother Arejay who is simply a monster and so entertaining to watch when he is playing his drums. I even enjoyed his drum solo — which I usually despise — because the guy is just so entertaining and such a character. Halestorm started off very strong with two tracks from The Strange Case Of… — “Love Bites (So Do I)” and “Freak Like Me” — before launching into the older goodie “I Get Off.” Unfortunately, from that point forward, Halestorm gave their undivided attention to tracks from their new album Into The Wild Life with the only notable exceptions being Arejay Hale‘s drum solo and the set closer “I Miss The Misery.”

The first new track from Halestorm was “Amen” which has a catchy chorus that translated well live. Although all of Halestorm‘s songs from Into The Wild Life definitely sounded better live than on the album, they were still a bit dull to listen to and I found that the momentum on each song was killed with each song’s varying slower tempos. While I was happy to see Halestorm live again, each time that they came up with another new song to play, I was hoping for tracks from The Strange Case Of…  By the time that Halestorm finished playing six straight new songs (with the drum solo sandwiched in there as 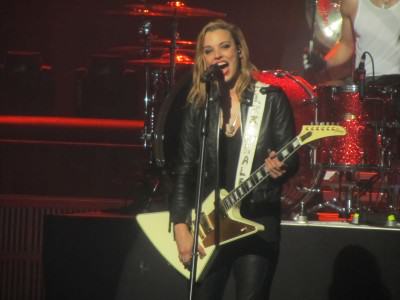 well), Lzzy Hale announced to the crowd that they only had one song left to play. Not surprisingly, Halestorm proceeded with a strong rendition of “I Miss The Misery” from The Strange Case Of… It certainly seemed that the strongest crowd reactions were for the Halestorm material from The Strange Case Of… and it was a pity that 60% of the songs in Halestorm‘s set came from their new album Into The Wild Life. It was even sadder to see that Halestorm elected not to play their amazing ballad “Here’s To Us” which would have likely prompted a massive sing along with whomever in the crowd knew that song. Perhaps Halestorm did not want to play such a slow song for the Three Days Grace crowd. Nevertheless, it certainly seemed that Halestorm had their fair share of fans in the audience.

In between Halestorm and Three Days Grace‘s sets, I took a look at the merchandise being offered by the bands in the secret hope and very remote chance that Halestorm might have their ReAniMate: The CoVeRs EP available for sale. As anticipated, the EP was not available for purchase and I was stunned at the prices of the merchandise being offered by both bands. I get that bands these days make a lot of their money off their merchandise sales. However, with Halestorm charging $40 to $60 Cdn for t-shirts to long sleeve hoodies and Three Days Grace charging between $40 to $80 Cdn for tank tops to long sleeved t-shirts, it just seemed like both bands were charging a rather high amount of money for their merchandise. At the end of the day, the law of supply and demand applies in this regard and as long as a fair amount of people still buy merchandise at those seemingly inflated prices, the bands will continue to charge those prices. I did the only thing that I could really do to protest those prices without drawing massive amounts of attention to myself. I did not buy any merchandise.

This takes me to an e-mail that I received a little more than a month ago from a Sleaze Roxx reader which stated in part, “…your review of that horrid band Three Days Grace and their concert back in July made me seriously question the direction that Sleaze Roxx is going. That band and bands like them should not be mentioned within a billion miles of your site.” Clearly, Three Days Grace have their share of people — or at least one person — who do not like them out there. I responded to the reader by stating in part that my goal in July was to see Halestorm and not Three Days Grace, and that the great majority of the bands covered on Sleaze Roxx were still the same ones when Skid was the site editor. I also added that if the reader did not like the band that was featured in an article on the site, that reader simply did not have to read the article. I know that is always what I have done if there is a band that I do not like and/or am not interested in that is featured on any website that I visit. 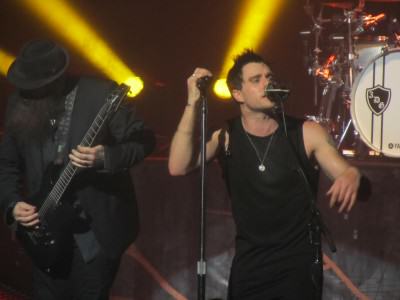 The last song to emanate from the Hamilton Theatre’s speakers prior to Three Days Grace hitting the stage was Rage Against The Machine‘s “Killing In The Name” from the group’s self-titled album. Again, Rage Against The Machine have never been featured on Sleaze Roxx from what I know but credit has to be given where credit is due. Whatever you might think of the group, the song served its purpose because it got me — and seemingly the rest of the crowd — pumped up for Three Days Grace‘s upcoming performance. Just like in July, Three Days Grace delivered an energy filled set with a lights heavy stage set filled with a couple of ramps and big stools or short tables at various areas at the front of the stage to allow for the band’s frontman Matt Waist to hop on and jump around.

Three Days Grace play formulaic type rock in my mind in that their song structures seem to be the same on each track with slower verses that build up into sing along type big choruses. These type of songs certainly work well live and enable someone like myself who is really not that familiar with Three Days Grace to 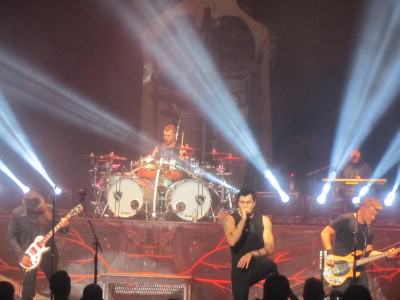 get into each song and even sing along to the catchy choruses. Accordingly, if you like one song from Three Days Grace, you’ll likely like them all — or at least the ones that they play live. In a bit of a surprise, Three Days Grace‘s setlist was exactly the same on this night as back in July when I first saw them live. There was no variation whatsoever with the setlist even though the band was playing in Hamilton which is about 45 minutes away from Toronto. I would have thought that the band would have switched their setlist up a little bit given that presumably many of their Toronto fans would be going to Hamilton to see them play four months after the Toronto gig. Similar to the repeated setlist, frontman Matt Waist‘s interactions and the timing for it sounded awfully familiar such as his “old school” introduction of the song “Just Like You.” 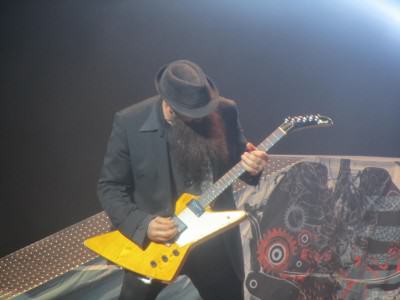 Frontman Matt Waist was very good at getting the crowd going from initiating “Three Days Grace” chants to inciting a good portion of the crowd in the front rows to repeatedly jump on certain songs. It seemed that the biggest crowd reaction however came when the singer started launching free t-shirts into the audience towards the end of the show. My favorite songs of the night were once again “Just Like You” which is the one song that I had heard from the group prior to July of this year, “So What” and the catchy “Good Life.” After seeing Three Days Grace put on two strong live performances, I would be inclined to purchase one of their live albums or greatest hits compilations but a quick check on the internet with respect to their discography seems to indicate that neither are available. I would have never expected myself to say this going into this concert but I enjoyed Three Days Grace‘s set probably more than Halestorm‘s set on this night.

While Halestorm may not have lived up to my expectations, the band members’ energy and enthusiasm was undeniable and I know that they are capable of delivering a killer show. It is obvious that the better the songs are, the better that their show will be and as long as Halestorm are plugging their new album Into the Wild Life, I think that the band will not be living up to its potential on what it can deliver live.