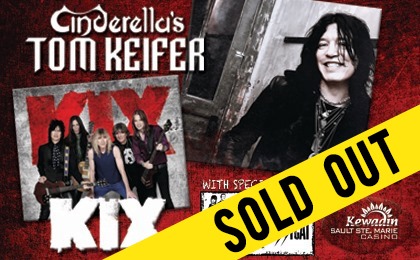 Fellow Metalheads, let me introduce myself. You can call me Sammy The Bull. I, like you, am a die-hard from the ’80s that still follows (mostly on Sleaze Roxx) and buys CDs / LPs from my favourite (Canadian spelling) hair bands. I’ve seen every act at least once, mostly in Toronto and Detroit. I’m married to my new rocker convert KC and we have two kids – Sebastian (yes, named after Sebastian Bach of ex-Skid Row) and CC (yes, named after C.C. Deville of Poison). I met Olivier (Sleaze Master) at a few shows through our mutual pal Mark Gregory. We screamed “Death To All But Metal” to Steel Panther and experienced “The Final Countdown” together with Europe. Good times. Thanks for letting me join the family.

Now living in Northern Ontario, concerts are few and far between. When I found out that three solid acts were coming on one bill, I was sold and purchased my tickets day one. The Tom Keifer Band, KIX and Faster Pussycat were booked to play Vegas Kewadin, a casino in Sault Ste. Marie, Michigan. I picked up row J tickets (nos 1, 2 and 3 on the aisle) for $35 US and hoped we wouldn’t be sitting next to “that guy” at the show. You know, the drunkest, loudest guy that distracts you from the performance (more on that later). Vegas Kewadin is about a 20 minute drive from my place on the Canadian side and is the premiere venue to watch acts in the area. By the time the show came around, the event would be sold out — approximately 1,500+ fans. My long time concert partner in crime Lee came with my converted rocker wife KC.

While I knew that I would enjoy the whole show, I was so jacked to see Faster Pussycat. Leading up to the show I cranked all their CDs including Power And The Glory Hole. At this time, Taime Downe is the only original but he has assembled a tight 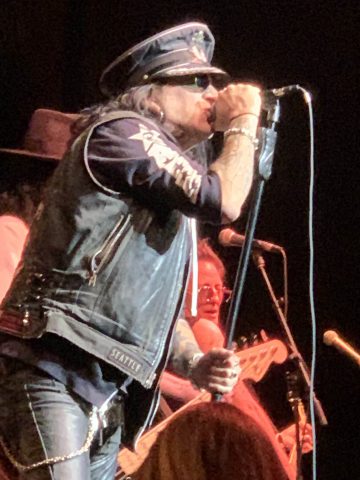 group of vagabonds to tour (and hopefully release some new music soon). They were up first and opened the show with “Jack The Bastard” (from Whipped!) a song that they traditionally open with so no surprise there. Taime looks and sounds great since quitting drinking and smoking. He then led the band into hit after hit with “Cathouse,” “Slip of The Tongue,” “Don’t Change That Song” and lighter in the air ballad “House of Pain.” Everyone there knew every word to every song. The group dug a bit deeper into their catalogue and performed one of my personal favourites “Friends.”

The band would then kick into one of their first hit “Bathroom Wall.” I have seen Faster Pussycat perform on four other occasions and this is the first time they pulled this trick out of their playbook. Halfway through “Bathroom Wall,” bassist Danny “Slim Tender” Nordahl took over the lead vocals and performed the Supersuckers cover “Pretty Fucked Up.” The crowd was probably not familiar with this one but the chorus was pretty easy to learn. Downe then came back to the mic and finished “Bathroom Wall.” The only song from The Power And The Glory Hole was the second to last song of the night — “Shut Up And Fuck.” Newest addition to the band, Sam Bam Koltun, added tons of energy on stage. Koltun, was not even born when the band was a part of the hair metal revolution but he had a solid performance and seemed to enjoy every moment on stage with his counterparts. The band ended their set with “Babylon” and for most fans, the night was complete. I purchased their concert t- 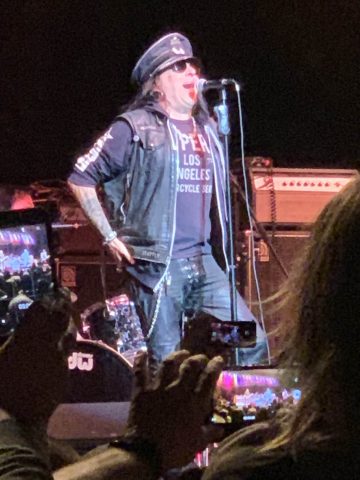 shirt for $30.00 but nowadays, I really don’t know where I can wear a shirt that says “Raped and Pillaged by Pussy Power” on it. It will live in my drawer with plenty of my other concert tees. I would see this band if they performed alone on a bill so I could hear some other great tunes like “Where There’s A Whip There’s A Way,” “Nonstop To Nowhere” and “Number One With A Bullet.”

Up next were Maryland rockers Kix. This is a band that I had not seen in 25 years but if I closed my eyes, they sounded the same as they did then. Unlike Faster Pussycat, the band’s line-up is very similar to its heyday with bassist Mark Schenker being the newest addition (but has been with is band since 2003). As I was pleading for the bartenders to pick up the pace, KIX took to 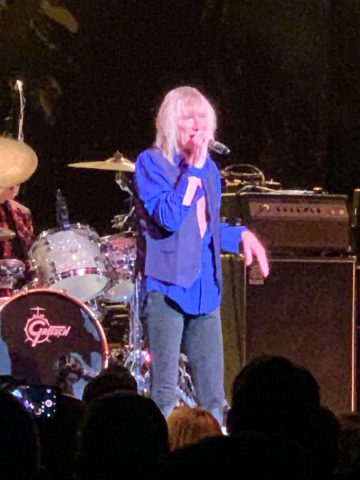 the stage and launched into “Midnight Dynamite.” I made it back to my seats just as the crowd applauded that classic tune. Steve Whiteman was rocking a blue sparkly blazer and took a harmonica out of one of his pockets to add to “Ring Around Rosie.” “Get It While It’s Hot” and “Girl Money” were up next and that led to a song I hadn’t heard live — “Love Me With Your Top Down.”

By this point of the show, most people were standing. Unfortunately, “that guy” at this show was a girl that possibly had a few too many pops and she grabbed my wife’s hair and told my wife to sit down. My wife turned around and looked down at this smaller woman and “encouraged” her to stand up and enjoy the show or to leave as this was our date night and nothing was going to stop us from having fun. Nothing. Didn’t see them for Tom Keifer’s set. The lighters came out again for “Don’t Close Your Eyes” and Whiteman told a story of how he used to tape Casey Kasem’s weekly countdown and was ecstatic when Kasem said “And now coming in at Number 11 from Hagerstown Maryland, here’s KIX performing ‘Don’t Close Your Eyes’”.

You could tell that this band has been around for a while (1977) as Ronnie “10/10” Younkins launched into a guitar solo, an artform that took place more often in the past but still much appreciated to this day. When KIX came back to the stage, they lit into “Cold Blood” off of 1988’s Blow My Fuse. The crowd was really into KIX and at one point, Whiteman offered the mic to a guy in the front row to sing the chorus of “Cold Blood.” The guy butchered the verse (“Cold blood is all you need”) and Whiteman laughingly called him out on it. After making another vampire reference — “Cold blood is all you 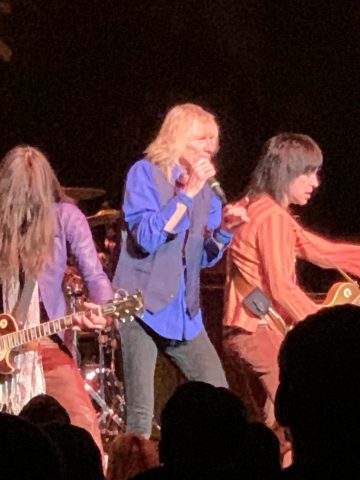 breed” — the band left the stage to offer drummer Jimmy “Chocolate” Chalfant his time to shine. Again, the solo is missed by fans my age. He was great. Lee and I reminisced about trying to discover or get a new CD and introduce it to others back in the day. I think he found KIX and shared them with me. With Tom Keifer coming up, KIX ended their set with “Blow My Fuse.” They announced that they had never been here before and thanked the U.P. (Upper Peninsula) Michigan crowd.

Cinderella was one of my first shows I saw back in the day. Even though this is the Tom Keifer Band, I knew what to expect. I purchased 2019’s Rise and enjoyed most of the songs. Tom, along with his wife Savannah, have assembled a tight touring band as seen with a group hug at the beginning of the show. You could see that each member takes pride in their musicianship and plays for each other.

The band opened up with “Touching The Divine”, the opening track from Rise. Savannah and Kendra Chantelle (former American Idol season 10 participant who I may have a slight crush on) performed backing vocals on this track as well as many 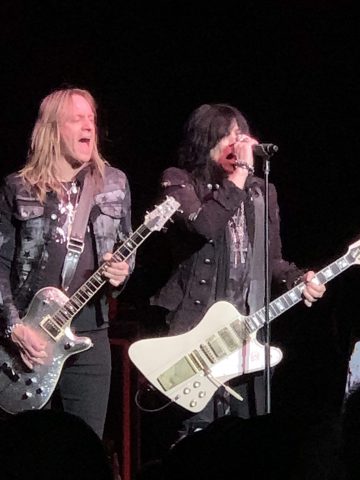 others (not all though) through the night. Most of the crowd undoubtedly did not purchase the CD and tried to bounce their way through it. Some simply folded their arms until something more familiar like “Night Songs” came on. From Cinderella‘s debut album, Keifer then went to Long Cold Winter and picked out “Coming Home.” “It’s Not Enough” off of Keifer’s first solo album The Way Life Goes was next followed by the Cinderella classic “Somebody Save Me.” You could tell that Keifer was trying to hook the crowd into his newer stuff as he interweaved old and new all through the night.

The roadies brought out a piano for Keifer to use for “Rise.” This guy is definitely worth the price of admission alone with all of his talents. Keeping with that slowerish type but vulnerable vibe, Keifer played “Nobody’s Fool” in which he belted out a looooong “I scream my heart out” that got the crowd finishing the verse “just to make a dime.” “Solid Ground” and one of my all-time favs “Fallin’ Apart At The Seams” were next and very tight and fun to sing along to. Next up was “Hype” which is probably the best tune on Rise, and is so relevant in today’s society. The band made a video for this single and you can easily find it on YouTube. Worth a look. It was at this point when my wife turned to me and asked when they were going to play her favourite song “Don’t Know What You Got (Till It’s Gone).” On cue, the roadie brought out the piano again and her wish was granted. Keifer begun on the piano, serenading his wife and then Savannah took a turn on the piano to finish the song.

“Shake Me” and “Shelter Me” were then performed back to back as the show was nearing its end. As the band left the stage, no one left their seats as the expected encore was up next. What hadn’t they played? What goodies would close this night of rock and roll bliss? From off stage, Keifer began a guitar solo that led the band back out to perform “Long Cold Winter.” Kind of fitting as the temperatures dipped to minus 25 Celsius (minus 13 Fahrenheit to our friends to the south) last week. “Death of Me” was the last song that he would perform from his solo work and by this point, most of the venue was rocking. That could have been the beer talking though. And for the grand finale, what most casual fans came to hear, “Gypsy Road” closed the show.

Great atmosphere. A venue that you can still smoke in. I saw some other show regulars in the lobby as well as some people I haven’t seen in 25 years. Time has not been kind to everyone. I also managed to take a couple pics with Sam Bam Koltun (Faster Pussycat) and Steve Whiteman (KIX) who were very accessible to their fans. That made my night.