I wasn’t planning to go. I’ve seen Geoff Tate a thousand times, and didn’t care or even know much about Blaze Bayley and Tim “Ripper” Owens. Well, the latter is good but I didn’t think it was enough to drag me out. Then a friend of mine wanted to go and he said the show was only $25 so I was convinced. Don’t get me wrong. I wasn’t expecting to have a horrible time… But, I sure wasn’t expecting to have the GREAT time that I did!

This show was full of surprises. The second we walked in, we were 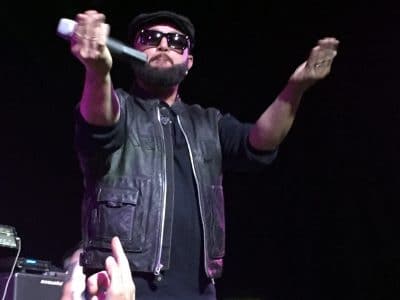 directly in front of the merch table. Turns out, Geoff Tate’s daughter was the one selling the merchandise and in speaking with the bassist that night, we found out he was her boyfriend. There was no ‘opener.’ Tate came out and did a couple of songs, introduced Blaze Bayley, who did a couple, and then he introduced Tim ‘Ripper’ Owens who did a couple songs as well. From that point on, they traded off songs like crazy. The band remained onstage and played the entire show. The only thing that changed throughout the night was the singer. Tate did Queensrÿche songs as well as one song — “The Stranger” — from his Operation: Mindcrime band’s first album, The Key. He came out with a full beard and moustache and he looked good. I don’t think he stopped smiling all night and his voice sounded GREAT! I’ve seen Geoff Tate on every tour with Queensrÿche, the first one being when they opened for KISS. I hadn’t heard of them at the time but they blew me away. I was chatting in the back of the arena when they came on and I spun around thinking, “WHAT THE…..” and I saw Geoff Tate’s glowing eyes all the way on the other side of the arena and he sounded amazing. I rushed to the front because I had to see these guys up close. 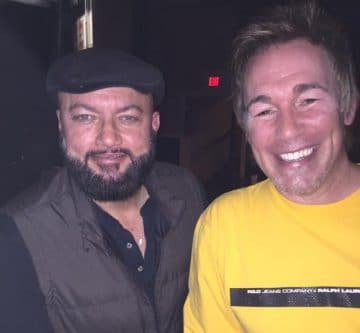 There was a time when people would complain that he was no longer singing the highs that he used to in concert. Many notes, he didn’t even attempt. When Queensrÿche split, I saw Geoff Tate’s version of Queensrÿche play a show (with Rudy Sarzo on bass and Simon Wright on drums) and Tate brought it! His voice was great again. Last night, I spoke to Geoff Tate after the show and I mentioned this. I asked him what happened and what he did differently to get that great voice back and his answer was “Nothing.” I rephrased my question and insinuated that he’d gone through a period where he’d lost some of the highs and then, suddenly, after several years, he came back hitting all the notes again and asked him how he got that back. Rephrasing the question didn’t help, I got the same answer.

I said to Geoff, “You and Chris DeGarmo are still in contact and you were such an AMAZING writing team so why haven’t you gotten him to write some songs with you again?” He said, “Chris doesn’t write music anymore.” I said, “Well, he wrote an album with his daughter” to which he replied, “He helped his daughter with a school project.” All in all, Tate was friendly and I was happy to have a moment to be able to ask a couple of questions.

Tim ‘Ripper’ Owens came out screaming like a banshee! He powered through Judas Priest songs effortlessly. He slipped in one song off of 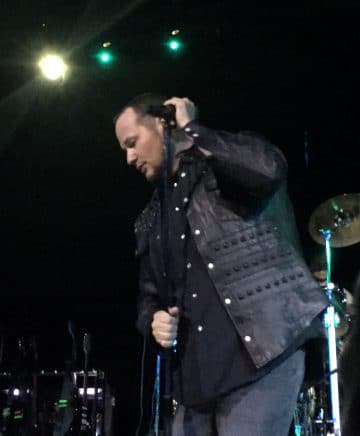 Jugulator, which is one of the Judas Priest studio albums he sang on, as well as an Iced Earth song. This man is on top of his vocals. He is never reaching for a note. He still does the “Rob Halford bend over” while singing move! I don’t know if that comes from him imitating Halford in the early days or if it’s just a similar stance. He seemed to be having a good time as well and the crowd loved him. He really is an impressive singer and enjoyable to watch. To be honest, he was the one I was most looking forward to when I committed to going to the show. Ripper refused to leave the stage when the band started playing Iron Maiden’s “Wrathchild.” Blaze inched his way from the side stage, trying to signal Ripper that it was time to go. Ripper said he was going to sing this one but Blaze shot back and said this song was one that he was supposed to be singing. They ended up both singing the song together in a “tug of war” style vocal battle that sounded great.

As most of you know, the movie Rock Star (starring Mark Wahlberg) is loosely based on the Judas Priest story. In the beginning, it was actually even entitled Metal Gods. Since I’d always been curious, I asked Ripper what percentage of the movie was based on true events and he said “About 25%.” He’s a super friendly guy, and, vocally, as I said, he is amazing.

And that brings us to Blaze Bayley, the man that I was least familiar with. This man took the stage and grabbed the crowd by the throat and figuratively pulled them onstage! What a showman this man is. My friend and I looked at each other in the middle of his first song and both said, “THIS guy is AWESOME”!! … and he was. We found ourselves looking forward to when he would come back onstage. He sang well, and he was all over the place and full of energy. He kept the crowd involved. He threw humor into the set. That man simply owned the stage when he was on it. I was truly impressed. I will definitely be purchasing some Blaze Bayley CDs and familiarizing myself with him. This is the man you want to hang with when you go out! What a blast he was. 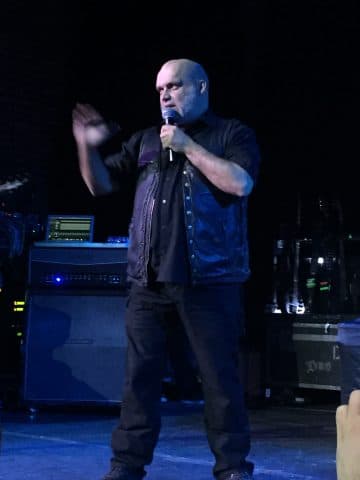 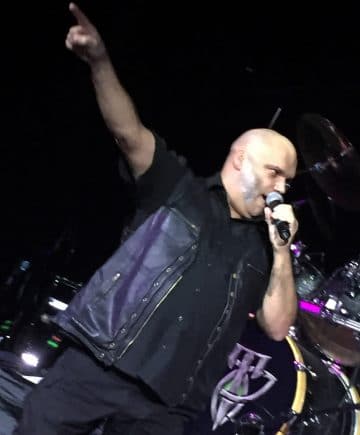 All three of these guys really did an excellent job getting the crowd into the show. My friend and I left there saying how shocked we were that we had SUCH a great time. We knew these guys were all great singers going into this night but like I said, we never expected to enjoy it the way we did. This is a VERY short and special tour these guys are doing. This show kicked off this tour and I believe they are playing only 6 more shows so catch them if you can!!