TWISTED SISTER KNOW HOW TO ROCK

I readily admit that a show performed in 2006 may not qualify as “retro”, but seeing Twisted Sister live that year for the first time simply blew me away and that concert was simply too good not to share.

Back in 2006, I was not as in tune as I am now in terms of possible concerts to attend, but a few months prior to the Twisted Sister show I saw a small blurb in a local newspaper announcing that tickets were about to go on sale. I quickly purchased a ticket to see the band at the venerable Massey Hall, which had the capacity to seat almost 2,800 people. As the concert date 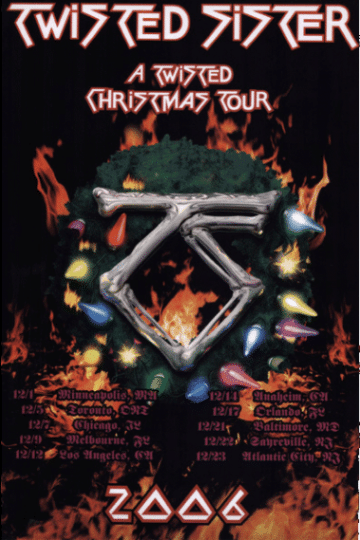 loomed, I was advised that the venue was changing from Massey Hall to the smaller Danforth Music Hall, which only seated around 1,500 people. While I was surprised at the move I was also pleased because this meant that, despite presumably slower than expected ticket sales, Twisted Sister were still going to make the trek to Toronto to play live! I was of course disappointed that my first time seeing the band live would be in the context of their ‘Twisted Christmas 2006’ tour since it meant having to hear a number of Christmas songs — albeit performed in a rocking heavy metal way — throughout their set, at the expense of some of the band’s classics.

With more than 3,000 shows under their belt, Twisted Sister quickly proved that there is virtually nothing that can replace experience. The band put on a great performance from start to finish. Lead vocalist Dee Snider easily proved why he is the best frontman in rock ‘n’ roll as he had the crowd, including myself, laughing at times but also seriously pumping our fists and screaming our guts out. Quite simply, Snider is a master at what he does. He knows just what to say to win a crowd over and get people “motivated” to sing out loud and throw their fists into the air. Not that Snider had to do that on this night, as whoever attended Twisted Sister‘s show appeared to be long-time fans who, like me, had to wait a long time to see the band play either for the first time or again after the band broke up back in 1987.

Twisted Sister kicked off the evening with the Christmas classic “Have Yourself A Merry Little Christmas” before playing two of their faster tunes, “Shoot ‘Em Down” and “Stay Hungry”. What I remember most vividly about this show was how I was just blown away by the power of the opening riffs for “You Can’t Stop Rock ‘N’ Roll”. I had never felt anything like that for a song up to that point, and have yet to experience that feeling again at a concert. One of my arms quickly went up in the air with my fist pumped for the appropriate sections of the song’s opening riffs — that was hands down the best song of the set for me.

From then on, Twisted Sister alternated one of their own classics with one of their Christmas songs from their ‘A Twisted Christmas’ CD all the way until their final encores for the night. Twisted Sister‘s bestselling album ‘Stay Hungry’ was, unsurprisingly, very well represented on this evening with six songs played from that album. Unfortunately, two of the band’s best albums — ‘Under The Blade’ and ‘You Can’t Stop Rock ‘N’ Roll’ — received little love during the show with only two and one songs respectively played from those two stellar albums. ‘Come Out And Play’ also was poorly represented with only “The Fire Still Burns” being played. I would have liked to hear the title track from that last album as well as the opening track “What You Don’t Know Sure Can’t Hurt You” from ‘Under The Blade’, or even a few tracks from ‘Love Is For Suckers’ — but it was not meant to be.

Twisted Sister ended the show on a high with their two hit singles “I Wanna Rock” and “We’re Not Gonna Take It” — which feature the best two intros of all time for rock videos in my book — along with their perennial show closer “S.M.F.”. At the end of the day, I would have much preferred that Twisted Sister did not play any of their songs from ‘Twisted Christmas’, which is still one of the best Christmas metal albums out there, but at the same time I knew that if it wasn’t for that CD Twisted Sister would have most likely not played in Toronto that night. Another factor which emphasized how rare and special it was for the New York rockers to come to Toronto was that guitarist and band founder Jay Jay French complained to the crowd about what a hassle it was for the band to cross the border from the U.S to Canada. At that point, I knew that this might be the last time Twisted Sister would be playing in Toronto, and so far the band has yet to come back to play in Canada’s biggest city. Had Twisted Sister not played songs from their ‘Twisted Christmas’ CD, I would have likely ranked their 2006 concert as my favorite show of all-time — nevertheless, I still consider it as one of the best that I have ever seen.