With U.D.O. making a very rare appearance on North American soil, I thought that I would check the band out live in concert. To be frank, it is not really a band, just Accept‘s former vocalist, Udo Dirkschneider, backed by some able musicians. A quick check of U.D.O.‘s website confirms that forays on North American soil are a rare thing indeed, and although the band has toured from 1988 to 1991 and every year since 1997, U.D.O. has only played twice previously in Toronto — in 1988 and 2000. With an average of about 12 years between tour stops in Toronto, and anywhere in Canada and the United States, it was now or never to see U.D.O. live. Udo Dirkschneider is already 61 years old, and although I may be proven wrong, I do not expect him to be playing live in Toronto at 73 years of age…

Ironically enough, about two years ago, I saw the new version of Accept with vocalist Mark Tornillo playing live at the exact same location — the Mod Club. Accordingly, there would have to be some comparisons in my mind between Accept and U.D.O.‘s live performances. I do concede that I am not as familiar with U.D.O.‘s songs compared to Accept‘s, so U.D.O. was going in at a disadvantage unless many Accept tunes were played. A quick check of the set list, conveniently posted on the stage for each band member to see and whichever concert attendee was close enough to the stage, confirmed that I likely only knew well about half of the songs for the evening. It did not really matter that much since most of the U.D.O. songs that I was not familiar with and played that night followed the same formula more or less — some simple riffs followed by Dirkschneider growling the verses of the songs at a slower pace followed by an easy sing along chorus (example, “Leatherhead”) with most, if not all, band mates supplying the background vocals. 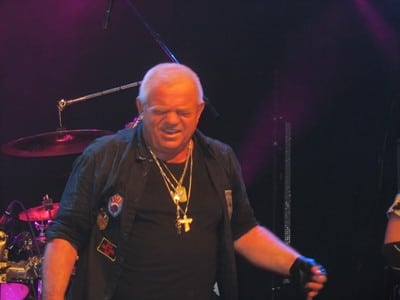 U.D.O. kicked the night off with two newer tracks, “Rev Raptor” and “Thunderball”. Two solid tunes, but it was not until my favorite U.D.O. track was played — “They Want War”, from the band’s debut album ‘Animal House’ — that the evening started going into a higher gear for me. One thing about the Accept tracks that were eventually played that night was that they had different and more interesting tempos than the U.D.O. songs. I sort of consider whatever was played from ‘Animal House’ as Accept tracks since they were written for Dirkschneider when he first left the German band — how many bands would do that for a departing band member? But I regress — back to the concert. The next track was “Metal Machine” from the forthcoming ‘Steelhammer’ CD. It’s not a bad song, but again it followed the typical pattern of most of the U.D.O. songs. Perhaps in a smart move, U.D.O. started following one of their tracks with an older classic Accept tune. “Leatherhead” was followed by crowd favorite and Accept classic “Screaming For A Lovebite”. “Vendetta” was followed by the fantastic “Head Over Heels”, from Accept‘s best known album “Balls To The Wall”. 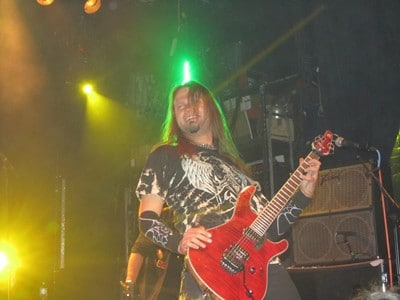 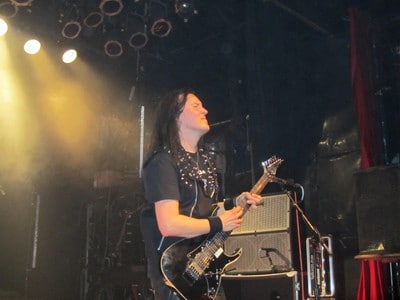 Unfortunately, the audience was “treated” to not one but two guitar solos in the evening. I would much rather hear two extra songs than two extended solos of any kind. To make matters worse, after having just seen Living Colour play live the night before, and being treated to guitarist Vernon Reid‘s virtuoso guitar playing, hearing U.D.O. guitarists Kasperi Heikkinen and Andrey Smirnov each take a turn alone on the guitar was the two lows for the evening. There simply was no comparison after hearing Vernon Reid tear it up the night before. And I won’t even begin to compare the stellar vocals of Living Colour‘s Corey Glover to those of Dirkschneider. That being said, U.D.O. has a better song repertoire than Living Colour.

Getting back to the concert — in between the two guitarists’ solos were some solid songs including “Man And Machine” and “24/7”. Having heard Sister Sin play “24/7” on the same stage about two months ago, I clearly prefer Sister Sin‘s version of that song. After the last guitar solo, the band played another of my favorite U.D.O. tracks, “Animal House” — a stellar song from start to finish. The two last songs — before the encores — were “Break The Rules” and “Timebomb”, two so-so songs in my book. 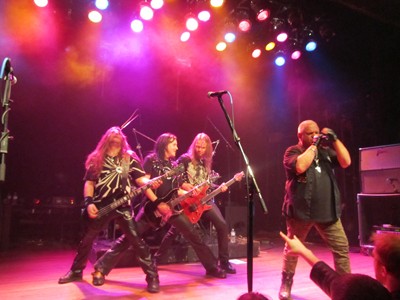 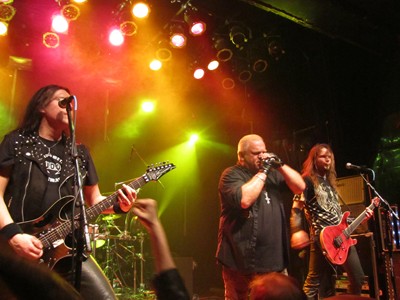 I should point out that the on stage banter from Dirkschneider to the audience was virtually non-existent. Aside from a few “thank you very much”, initially commenting that it had been a long time since he had played in Toronto (no kidding!) and introducing the song “Metal Machine” from the forthcoming ‘Steelhammer’ CD, Dirkschneider said nothing to the crowd. It was only towards the end that he would tease the crowd with something along the lines of “do you want one more?” Really, Dirkschneider was pretty disappointing in terms of trying to connect with the audience. I would be remiss if I did not point out that all of the band members looked like they were really enjoying themselves the entire night.

The best was saved for last. U.D.O. closed out the show with three Accept classics — “Metal Heart”, “Balls To The Wall” and “Fast As A Shark”. You simply can’t go wrong with any of those songs. Perhaps the funniest thing for the night was when numerous concert attendees were leaving the Mod Club. There was Udo Dirkschneider, still in his stage clothes, with a white towel around his neck dodging exiting concert attendees at what appeared to be a furious pace (for him) to reach the tour bus that was parked in front of the venue. That was the fastest that I had seen Dirkschneider move all night. I don’t know if his band mates had already beaten him to the bus but clearly Dirkschneider appeared to be in a hurry to get on that bus.

Would I go see U.D.O. play live again? Probably not, if there was no other band on the bill that I wanted to see. I clearly liked Accept‘s show better at the same venue two years earlier — perhaps again because there were only Accept songs being played. At the end of the day, I was happy that I got to see the legendary Udo Dirkschneider live in concert — although once will most likely be enough! 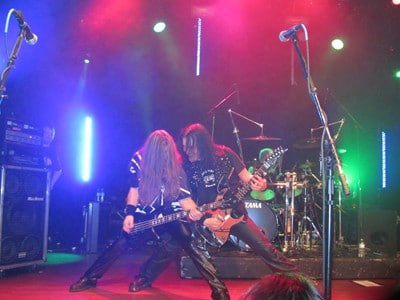 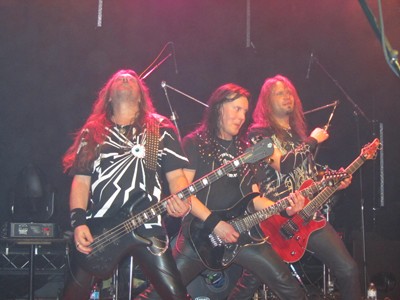