BACK TO BACK SOLD OUT CROWDS FOR UFO AND SAXON 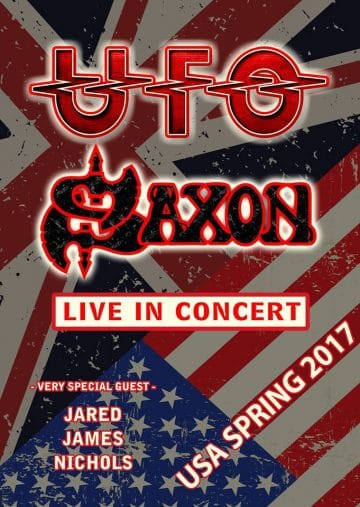 Once again, back at the Arcada Theater — one my favorite venues to see any concert in Chicago area. For the past years now, UFO has played Arcada Theater back to back nights with sellout shows and once again, another sellout with the next night  close to a sellout.

Jared James Nichols is the special guest opening act for the UFO / Saxon tour 2017. Nichols is a songwriter, guitarist and lead singer for his three piece trio band, which includes Erik Sandin on bass and Dennis Holm on drums. I was looking forward to seeing Nichols as I had heard he’s a junior Ted Nugent and a wild man. This would be the first time hearing or seeing Nichols as most in attendance tonight. The venue was filling in and the lights were going out when Nichols hit the stage with full out energy and feeling. Blues rock riffs and music was coming at the audience in full force. There was great stage presence coming from the band, which is always good to see. You want your artists to perform and 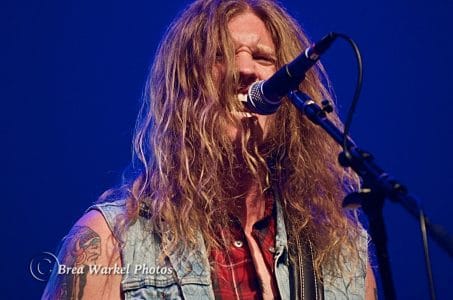 give their best on stage, and never be boring as they are entertainers as well as musicians.

With Nichols having over 500 gigs under his belt by his 21st birthday, you can only imagine how well he performed onstage. Not only that but surviving a tour with Zack Wylde I would think has to make you a seasoned performer. Nichols does not even use a guitar pick for crying out loud! This young guy is an amazing guitarist with killer blues licks, rock flicks, and every kind of lick. Nichols played very fluently song to song while Eric Sandin on bass did great vocal work as well as exceptional bass work. Between Sandin and Holm, they kept that rockin’ blues drive going. While I went backstage to check out a couple of songs from the side of stage, I was standing next to Vinnie Moore who was definitely intrigued and enjoying the show. As Moore watched the whole show from 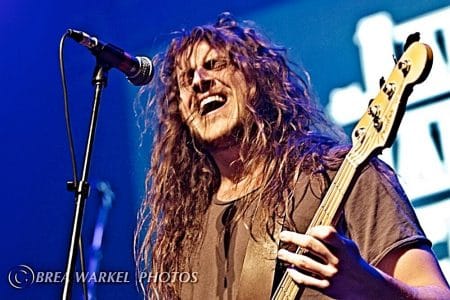 the side of stage, it made me wonder if this was the first time Moore had a chance so far on the tour to actually see Nichols perform. The crowd seemed to really enjoy Nichols. One thing is for sure. Jared James Nichols had many UFO / Saxon fans on board with his power trio.

A couple of years ago, when I saw one of the best English heavy metal bands Saxon with Armored Saint, it was a killer show. I 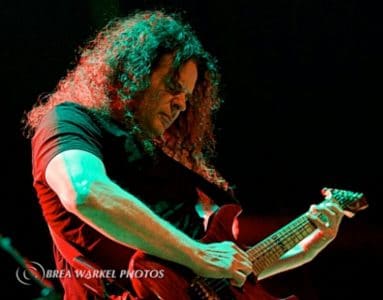 was assuming Saxon would be just as good as the last time I had seen them. The crowd erupted when Biff Byford took to the stage starting with the title track off their 21st album Battering Ram released in 2015. This song is a powerful opener to start the crowd out with. Saxon followed up with a song from back in 1983 — “This Town Rocks” — which grabbed me but not as well as the third song on the night “Sacrifice” which has heavy riffs in anthem like moments. Next up was harmonizing guitars on “Power And The Glory” with amaz-ng bass work on this tune from Nibbs Carter who joined Saxon in 1988. “Queen Of Hearts” was next and is a heavy dark mysterious song, which is probably not one of the crowd favorites.

The songs kept on coming with “Eagle Has Landed”  and the bluesy rock song “Dallas 1PM”, which is a song about JFK‘s assassination, which is definitely a classic rock tune that was well performed. 1980 hit “Strong Arm Of the Law” was next with that classic basic bluesy 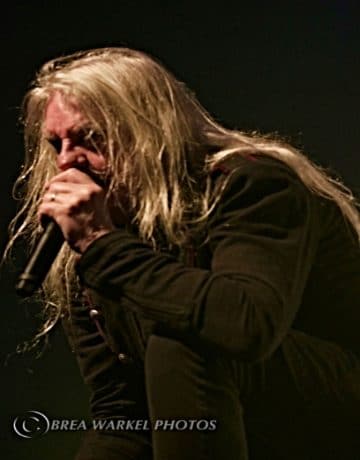 metal sound that kept fans moving. Next up was one of my favorite songs “Heavy Metal Thunder” off of the Strong Arm Of The Law album. The title track off Saxon‘s sixth studio album Crusader, which was released in 1984, has that true heavy metal feel to it and freaking awesome guitar solos from original band member Paul Quinn on lead guitar. Quinn’s leads and sound all night were amazing.

“Wheels Of Steel” hands down was the shit live just like the encore tunes “Denim And Leather” and “Princess Of The Night” which fucking hit you in the face. Nothing screams like these last three tunes and the crowd was left wanting more. The fans head banged, jumped around, screamed like crazy and were on their feet all night for Saxon. The veteran band never disappoints as it is very underrated when it comes to live acts. Many of those that know Saxon, listen to Saxon, maybe those that aren’t even Saxon fans, and those who ended up seeing Saxon for the first time were all blown away. I’ve yet to come across anyone that I’ve talked too after seeing Saxon that says I hate them or thought they were “terrible” or even said they’re “alright.” Never once as the comments have always been complimentary such as “Awesome,” “Great,” “Unbelievable,” “Holy shit! I didn’t realize how tight they would be. They sounded amazing.” The compliments go on and on. Since the band’s inception in 1977 to now 2017 says it all that Saxon are still a must see after all these years and not going away. 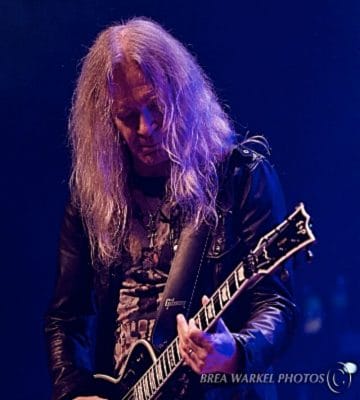 UFO are best known and considered as ’70s-’80s rock icons. They began their journey in Britain in 1969. That’s right — 1969 —  and they now had to follow an energetic Saxon, which would be tough to do. As UFO hit the stage at Arcada Theater, once 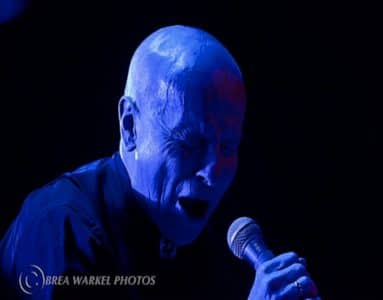 again, Phil Mogg, Andy Parker, Paul Raymond, Vinnie Moore and Rob DeLuca walked out as the fans gave them a warm welcome with a standing ovation. UFO started the night with their power ballad “Long Gone” from their The Wild, The Willing And The Innocent album. This is definitely not a song I would’ve started out with as you want your fans staying on their feet being excited and keeping them engaged.

UFO really didn’t start getting their fans going until the fourth song “Lights Out” which is one of their all-time hits with great solo work and leads from Vinnie Moore who nails former guitarist Michael Schenker’s parts. With UFO having many ex-guitarists play for them, the one that has been the best fit is Vinnie Moore who continues to shred on with UFO. The acoustic guitar came out with Vinnie Moore playing “Baby Blue” which is one of Moore’s favorite songs. The mood 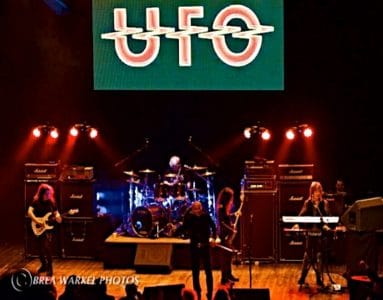 of that song kept the fans in a mellow state and “Ain’t No Baby” just kept that mood going. UFO picked up the tempo a bit with “Only You Can Rock Me.” Halfway through the set and it was time to “Burn Your House Down” with Vinnie Moore’s fluent guitar solos and licks. Moore’s solo on this song always gets me motivated to play guitar myself. His unique style and tone work.

UFO were a little “Too Hot To Handle” — well, maybe in their heyday — but with them cranking out another one of their classics, this hit the energy level back into the crowd. I knew that going from a heavier band such as Saxon to more of a classic rock band such as UFO would be quite a bit different. I was glad to see “Messiah Of Love” which is a bluesy rock tune with Moog’s growling vocals. Next up was “Love To 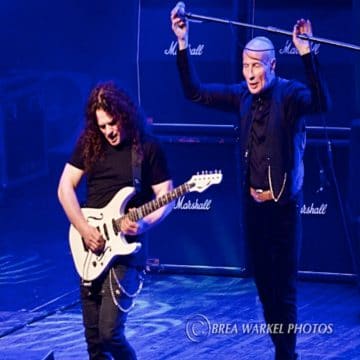 Love” with Paul Raymond’s keyboard work well expressed in this masterpiece. Moore’s guitar work was exceptional on this track as well as on “Rock Bottom” which featured his blazing licks and solos. Vinnie Moore, in my opinion, is better than Michael Schenker technically, with his smoother transitions and since he is a cleaner player.

There were lots of cheers for one of the greatest British rock bands — UFO — to comeback onstage for an encore which was granted with the anthem like love ballad rock song “Cherry.” “Doctor Doctor” followed and has been a staple in UFO’s setlist since 1974. The band topped off the night with “Shoot Shoot.” While leaving the venue, I found out that UFO had just sold out their show for the following night at Arcada Theater. That’s six sellout crowds for the last few years at this venue alone, which speaks volumes that no matter what my thoughts are that Saxon put on the better show with their stage presence and energy, UFO also performed in excellent fashion, sounding great and kicking ass. Even though UFO were not as in your face as Saxon were, it did not matter as 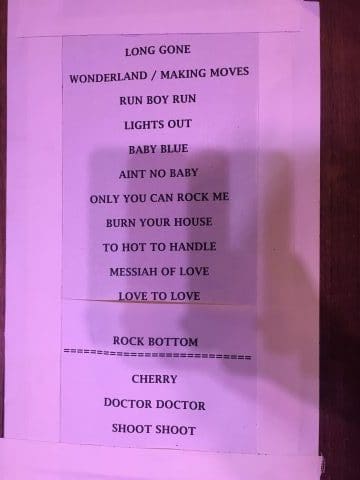 the fans were here and always will be here for UFO.