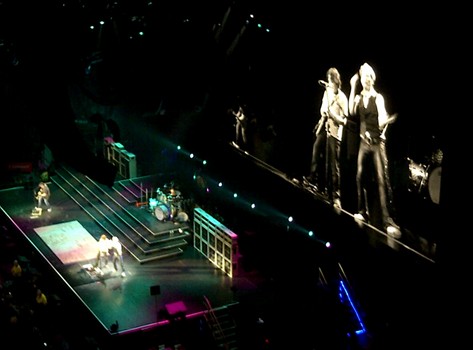 Van Halen has always held a soft spot in my heart given that their ‘1984’ album (CD for those of you who do not vinyl) was the release which opened the floodgates for me and got me turned on to hard rock/heavy metal.

Prior to getting to the show, I had the unfortunate task of selling one ticket given that one of the friends that was supposed to accompany me to the Van Halen concert ended up getting “promoted” to a corporate box. You would think that selling a ticket to a likely sold out concert would be easy to do but perhaps the price tag (over $100) for a seat in the nose bleed section was not that attractive, or maybe all the Van Halen fans had already bought their tickets. Whatever the case, the most that scalpers were willing to offer was $20 for the ticket. I was pleased that the scalper that eventually bought the ticket was able to presumably resell it to someone else within 45 minutes of Van Halen going on stage.

On with the show! The stage was rather plain looking with lots of amps on either side of, and a small landing to one side of, Alex Van Halen‘s mammoth drum kit. There was the almost mandatory BIG screen behind the stage, and of course as was expected, the light show was spectacular and the simple stage with big screen ended up working well. The start of the concert was a casual affair with the Van Halen boys strolling onto the stage before Diamond Dave made his way onto the stage himself. From then on, the sold out crowd was treated to some fantastic rock. I say sold out because anytime there are tons of people sitting behind the big screen on either side, it has to be sold out.

Van Halen opened with one of my personal favourites, “Unchained”, and did not let up for the rest of the night. “Runnin’ With The Devil” followed and you could actually hear the crowd singing most of that song’s words. The band then kicked off the first of four songs for the night from their new ‘A Different Kind Of Truth’ CD with “She’s A Woman”. That song worked well which is not surprising since it is an oldie but goodie reworked from Van Halen‘s late ’70s batch of previously unreleased songs. Next up was what I think was “The Full Bug” — having not heard the ‘Diver Down’ album for more than a decade, the song sounded very familiar but I could not identify it 100%. In any case, it was a real treat to hear that one.

After the obligatory “Tattoo” (first single from ‘A Different Kind Of Truth’), which worked better than expected despite being slower and duller than most of the other Van Halen material that night, the band seemed to hit their stride with a rousing rendition of “Everybody Wants Some”. Eddie and Wolfgang Van Halen‘s harmonies were excellent and stayed that way for the remainder of the night. I can not say the same for Diamond Dave‘s vocals though, which slowly disintegrated throughout the night — more on that very soon.

The rest of the new songs, “China Town” and “The Trouble With Never”, followed alongside more classics which would likely only be played by Van Halen with David Lee Roth at the helm — “Somebody Get Me A Doctor” and “Hear About It Later”. About halfway through the show, during “Dance The Night Away”, I started noticing that Diamond Dave‘s vocals were “off”. Either he would scream out yelps or sort of talk his way at times through the songs. Luckily for Diamond Dave, Eddie and Wolfie‘s harmonies were so good and provided such sing along opportunities for the crowd that it didn’t really matter. The one moment when Roth‘s vocals simply did not work was when he was alone on stage strumming his guitar to “Ice Cream Man” — he simply could not hit the notes of, or the tones needed, for the song which ended up sounding quite lame compared to the original on Van Halen‘s classic debut album. That being said, and having seen Diamond Dave during his 1988 solo tour in support of his ‘Skyscraper’ album when he really could not sing, it was still a real treat to have David Lee Roth back leading some form of Van Halen — there is simply no one like Diamond Dave. 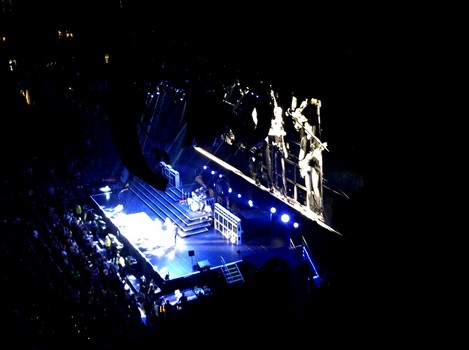 There were some funny moments throughout the night. Roth forgot the lyrics to the second verse of “Girls Gone Bad” (a surprising but pleasing choice of songs) — but quick with his tongue, Diamond Dave blurted out “F**k, I forgot the lyrics!” Another funny moment came during “Panama” when the slower part of the song came up and Roth started commenting to a good looking female in the audience about being a “professional” when it came time to “reaching down between his legs”. Eventually, the spotlight was placed on the poor woman who was likely embarrassed but handled it well.

Although Diamond Dave was definitely in his element — smiling, dancing, posing, twirling his mike stand like a baton and doing his high kicks from time to time — the heart of the Van Halen sound comes from Eddie Van Halen who was in fine form and truly showed why he is one of the best guitarists of all time. Eddie‘s son Wolfie was also quite good and seemed more comfortable on the stage than during the initial ‘sort of Van Halen’ reunion in 2007. Then again, playing the biggest stages in the world as a 17 year old, and having to replace Michael Anthony, must have been a daunting task. Finally, Alex Van Halen was his usual steady self. I must say that I did not notice him or his drumming much that night — so he was doing what he was supposed to do.

Van Halen did a great job of covering all of their prior albums with five songs each from their biggest albums — ‘Van Halen’ (if you include “Eruption” during Eddie‘s guitar solo) and ‘1984’. ‘Van Halen II’ was also well represented with four songs and a few songs were played off their “least” successful three other prior albums. It should be noted that all of Van Halen‘s albums with DLR went at least platinum in Canada and at least double platinum in the US, and just about any band would love to have achieved the level of success that Van Halen achieved with their original frontman.

At the end of the day, perhaps Diamond Dave‘s vocals were a little off but there is no denying that Van Halen with DLR still has it. Van Halen‘s new songs worked well with all of their classics… Eddie is still an amazing guitarist… Diamond Dave has the charisma, and with the Van Halen boys behind him, he has the “it” thing that puts them all at or near the top for hopefully a long time to come. 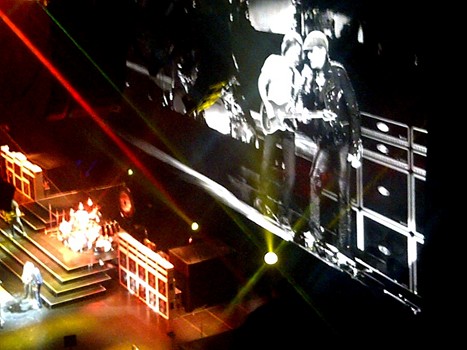