Van Halen will always hold a fond spot in my heart as they are the band that got me into hard rock and soon enough heavy metal. I still remember seeing the video for “Jump” playing on Video Hits (in Canada) among the other videos consisting mainly of pop rock songs. No need to say that I fell in love with the song “Jump” and this opened the floodgates for me to the best music in the world: hard rock and heavy metal. Accordingly, I was obviously very disappointed back in the day when Van Halen and David Lee Roth parted ways after the diamond certified album 1984 since my chances of seeing them play live as a unit had dwindled to what seemed like nothing. Luckily, after a very short lived and unsuccessful reunion in 1996, Van Halen were finally back and touring with Roth in 2007, albeit minus Michael Anthony, and I have made sure that I catch them live whenever they come to town ever since including their previous last stop in 2012.

Seeing Van Halen this time around was going to be extra special since my younger brother was joining me for the concert. It is hard to believe that two years had already passed since we attended our last few concerts together (Living Colour in Toronto and Shock in Ottawa). Obviously, I have been an excellent mentor to my younger brother since he advised me as we were inside the Molson Amphitheatre that he initially did not like a number of bands such as Van Halen, Cinderella and Vinnie Vincent Invasion but through my playing those bands’ records over and over again while we were growing up, he eventually started liking all those bands.

Given the sustained mostly multi-platinum success that Van Halen have had over their long music career, it is no surprise that the crowd was a mixture of the usual concert goers mixed with some cleaner cut and older looking people including one guy in a white shirt and tie (he must have come straight from work…). It was cool to see other musicians attending the concert including Killer Dwarfs‘ drummer Darrell Millar and Helix‘s Chris Julke, which spoke volumes on how influential that Van Halen have been during the course of their career. This is probably the show where I noticed the least amount of concert t-shirts among the people in attendance.

Given the exorbitant prices that Van Halen were charging for their one tour stop in Toronto (apparently $61.50 to $317.00 Cdn per ticket) and as a matter of principle, my brother and I bought the cheapest tickets — lawn tickets — but luckily we were able to upgrade those tickets along the way. It just seemed over the top to pay $200+ for a ticket when you could likely buy all of Van Halen‘s discography with that amount of money. Since it appeared that the Molson Amphitheatre venue was sold out when I looked back at the crowd while Van Halen were playing, the unfortunate reality is that the band will likely not hesitate to charge those incredibly expensive prices once again if they ever make their way back to Toronto. 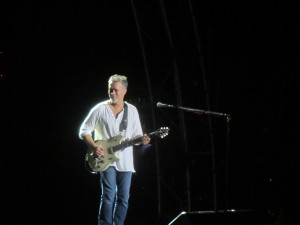 We arrived at the Molson Amphitheatre at around 8:00 pm and the opening band Kenny Wayne Sheperd was playing. What a bust he was in my eyes and ears as an opening band. I am sure that Shepherd is an accomplished guitarist but he had no business opening a show of this nature. The fact that just about the entire crowd was seated during the limited time that my brother and I listened to Sheperd and his band play truly says it all about what impact that he had on the audience on this night. No need to say that we made our way to the American Express lounge to wait for Van Halen to hit the stage. It really seems that Van Halen are now choosing and taking along opening bands that have zero chance of taking the spotlight away from them or blowing them off the stage. During their Toronto tour stop in 2012, Van Halen had Kool & The Gang opening for them and now in 2015, Kenny Wayne Sheperd. Perhaps Roth, Eddie Van Halen and Alex Van Halen are still cognizant of when Van Halen as the upstart opening band supposedly — rumour has it — blew a burned out Black Sabbath off the stage just about every night back in 1978. Whatever the case, I wished that Van Halen had seemingly more confidence and had brought out a worthy opening band to perhaps even begin to justify their exorbitant ticket prices and show their audience that they are not afraid to measure themselves up to some stiffer competition. 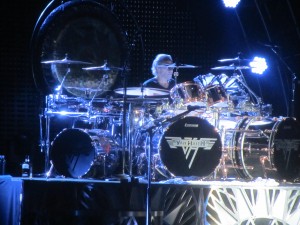 Having had a chance to take a look at Van Halen‘s setlist from their opening night, I was excited to hear some lesser played or perhaps never played Van Halen tracks. As the band hit the stage with “Light Up The Sky”, I was a little bit disappointed with the minimalist stage set which essentially consisted of Alex Van Halen‘s drum kit on a bit of an elevated platform, some amps on either side and a few overheard rigs of lights. Clearly, the money being charged to the patrons was not being re-invested into the stage show! As usual and as expected, the focus was on the two main guys in the band: guitar virtuoso Eddie Van Halen and the flashy and still flamboyant Roth. The crowd really looked like it started getting into it when the band launched into a spirited version of “Runnin’ With The Devil”. One funny but sharp contrast was the flashy and numerous outfits worn by Roth compared to the rest of the band who looked like they were dressed more to move furniture with their jeans, running shoes and non-collared shirts. 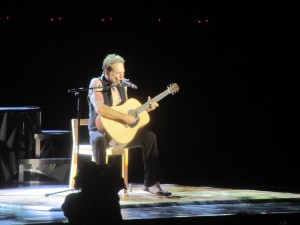 What was clear once again — and this has always been the case when I have seen Roth play live previously in 1988, 2007 and 2012 — Roth simply can’t sing anymore and is nowhere close to how he sounded on the band’s studio records from Van Halen to 1984. The best sounding songs were the ones where the vocal harmonies of Eddie Van Halen and Wolfgang Van Halen had the best chance to shine such as the trio of songs from Van Halen II: “Dance The Night Away”, “Beautiful Girls” and “Women In Love”. Other songs where I thought that Roth sounded pretty good included “Hot For Teacher” and “She’s A Woman.” The one song that I thought sounded absolutely dreadful was the butchered “Ice Cream Man” which started with Roth sitting down and playing a harmonica and strumming his guitar before the rest of the band came back for the remainder of the song. That track should just be put to pasture if Roth is going to butcher it like that night after night. I also thought that the song was a bit of a momentum killer since a large portion of the audience sat in their seats while Roth played his harmonica and strummed his guitar, and told a difficult to believe story about how his bicycle got stolen while he was living in New York City. 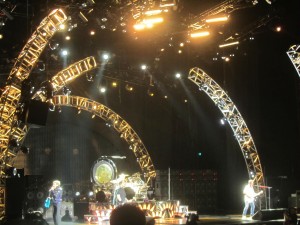 Now, you might think that I have been dissing Roth in a big way and did not enjoy Van Halen‘s performance but the reality is that it is still special to see Van Halen perform even if Roth can’t sing anymore. What Roth still has is his flamboyance, showmanship and charisma, and I think that carried him while he squealed and talked his way through a lot of the songs. I even saw one scissor kick from him, which is impressive coming from a 60 year old man. I was also very impressed on how Van Halen had really changed up their setlist from the last time that they had played in Toronto in 2012. This time around, the band played five songs that I had never heard live before, namely the opener “Light Up The Sky”, “Feel Your Love Tonight”, “Drop Dead Legs”, “In A Simple Rhyme” and “‘Dirty Movies.'” While I may not be a big fan of the latter three tracks — there are “deep cuts” and then there are cuts that should just be buried — it was nice to hear some variety on this night. 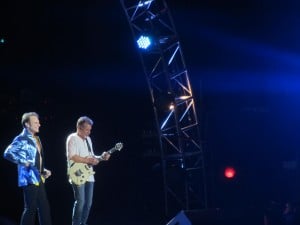 Other highlights included hearing “I’ll Wait” and “Hot For Teacher” — songs that would likely only be played with Roth at the helm — seeing Eddie Van Halen‘s super fast fingers on the big screen during his extended guitar solo, and seeing the crowd really into the “hey hey hey” portions of “Ain’t Talkin’ ‘Bout Love”. Van Halen closed off the evening with “Panama” and “Jump”, which had what seemed like the entire audience singing along but which performances were marred by Roth‘s poor singing. Hopefully, Van Halen still have another major tour under their belt and although Wolfgang Van Halen did a good job on this night, I am not so secretly hoping to one day see Roth, Eddie Van Halen and Alex Van Halen play live alongside Michael Anthony.