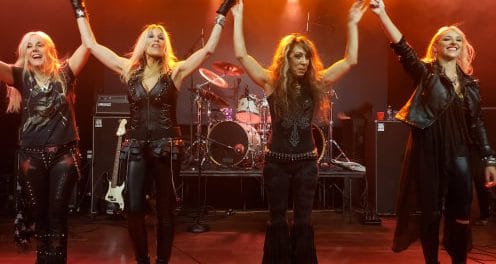 VIXEN LIGHT UP HARRISBURG WITH THEIR LIVE FIRE 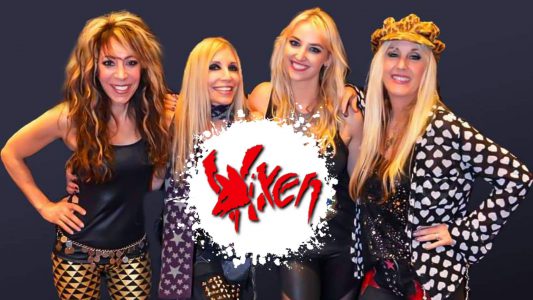 What are the odds that two bands that I really like would be playing on the same night, within a few hours of driving distance from one another? When I found out that L.A. Guns and Vixen were both playing shows in my area on the same date in early November, I knew that it would pose a dilemma for me in deciding which band I wanted to go and see. To make matters worse, one of my favorite new bands (American Jetset) were serving as direct support at the L.A. Guns show. Ultimately, there were a few deciding factors that I took into consideration while I went back and forth trying to choose. L.A. Guns are one of my all-time favorite bands, but I’ve seen them in various incarnations many, many times over the years (including the “original” lineup). I’ve only seen Vixen once. L.A. Guns tour fairly regularly these days, with frequent stops in my neck of the woods. It’s rare to see Vixen perform in a club though. Most of their shows are fly in dates to state fairs, festivals or cruises as part of packages. I’ve been a fan of Vixen’s music for many years and seeing them perform in concert earlier this year left me wanting to catch the band again to see their full set. With their new lead singer Lorraine Lewis at the helm, they were fantastic when I saw them at M3 back in May. Taking all of those things into account, I made the decision to go to the Vixen concert at Club XL in Harrisburg, Pennsylvania.

Harrisburg’s Eternal Frequency kicked off the show. Hitting the stage around 9:00 pm, It seemed like they had a rather late start time given that they were the only opening act. This may have been due to unforeseen circumstances behind the scenes that 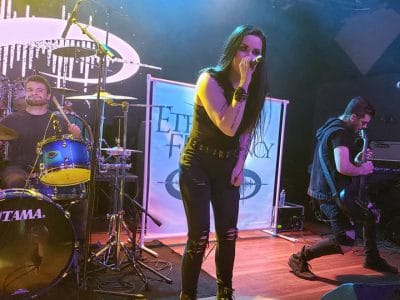 delayed the start of the show. Given the late start, I was surprised that the band only played five songs though. The first thing that I noticed when they took the stage was that they had two guitarists and no bassist. That initially had me wondering how they were going to sound until I heard their backing tracks kick in over the PA.

The effect added a layer of blast-beats, clicks and symphonic keyboards to their sound that only supplemented what the musicians played onstage. Each of the band members actually played very well and their singer, Emelle, has a great voice with tons of range. It all blended together and their setlist was executed perfectly. My favorite song of theirs was “Feel This Way”, which was nice and heavy without sacrificing melody. They also performed a rock / metal version of Pink’s “Sober” that was interesting. Few bands can pull that off well, but they did. Eternal Frequency reminded me a bit of Lacuna Coil but without the male / female vocal tradeoff. This upstart metal band had everyone’s blood pumping as they finished up their short but fierce set.

Taking the stage around 10:00 pm, Vixen were welcomed by a lean but enthusiastic audience that grew after a few songs in. As I mentioned, L.A. Guns were playing on the same night just a short distance away and I think this may have hurt the attendance 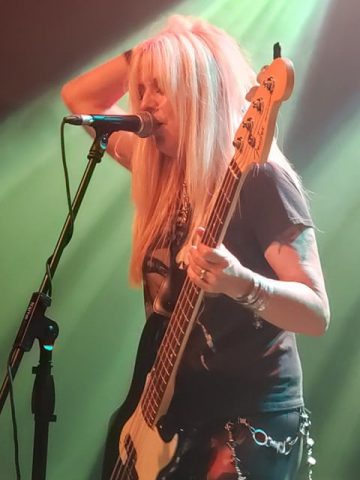 for Vixen’s show since both of these bands probably share an audience to some degree. Sure, there are those that only like L.A Guns or only like Vixen, but there are a lot of people that are into both bands. As the house lights dimmed, the floor filled up to a respectable level and the band kicked off their show with “Waiting For The Big One.” This song appeared on Femme Fatale’s debut album, which is the band that Lorraine Lewis sang for back in the eighties. It fits in perfectly alongside the Vixen material. That, to me, is symbolic of how great a fit Lewis is to the band. Whenever I listen to a Vixen album, one of the most identifiable components to their sound is Janet Gardner’s vocals. The only exception to that statement is their Live & Learn album, which featured a mostly alternate line-up. Their first two records, and even Tangerine to some extent, are full of melody, hooks and incendiary guitar work that were the perfect platform for Gardner’s sultry voice.

The last time I saw them perform back in May, I thought new vocalist Lorraine Lewis gave a spot-on delivery of all the classics from their first two albums. In fact, I didn’t feel like I was listening to another singer perform their songs at all really. I may feel differently once I hear their new studio output, but in terms of their live show, there wasn’t a drastic change to their overall sound and I’m sure that was the idea. Having fronted her own band, Lewis has been around the block and knows how to deliver. She has that cool and confident rock star persona perfected as she belts out “Edge of A Broken Heart” or “Cryin’.” She reels in the audience and never loses hold, all while shining as the epicenter of the stage. It becomes very easy to forget that she hasn’t been in the band all along. 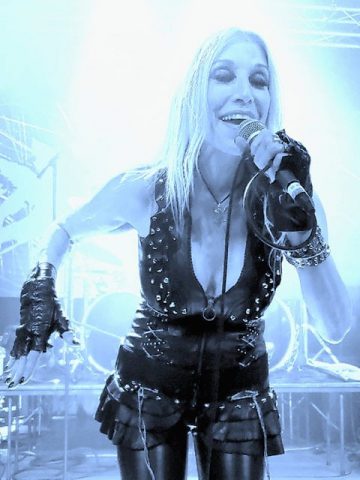 As expected, many of the songs in Vixen’s set were logically taken from their first two (and most popular) albums with the exception of a few rarities that were sprinkled in for good measure. I love hearing the hits as much as the next guy, but I actually thought that “Cruisin’“ was one of several highlights of their show. It’s up-tempo, the crowd was singing along, and the band seemed to particularly enjoy performing that one. It just gave off a lot of good energy in the club. During “I Want You To Rock Me”, the band welcomed two VIPs onto the stage to help them sing and experience the concert from a different vantage point. In writing, it might seem like a cool thing to join the band onstage but actually getting up there and doing it is an entirely different thing. Not my thing, but kudos to those two for having the guts to get up onstage and sing with the band.

The ladies occasionally throw in a cover of the Ray Charles song “I Don’t Need No Doctor” and this was one of the nights that they did. It’s a fun song and makes for an unexpected detour from business as usual. Lead vocals on this song are handled by bassist Share Ross, who has quite the set of pipes. Hearing her sing lead vocals makes it clear exactly what her voice contributes to the overall sound that we hear from Vixen. Those harmonies that are so prevalent in their music just wouldn’t sound the same without Ross. She can sing, she can play, and the in-demand bassist is just an all-around great musician. They’ve been tossing this number into the set for quite some time and it showcases her singing talents for a few minutes during their show. And with a bass player who can sing like this, they’d be crazy not to let her have a go at the microphone. 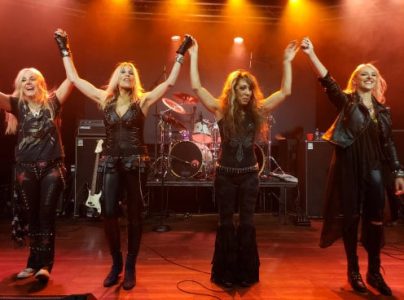 Lorraine left the stage during the song, and Ross squared-off with guitarist Brittany Denaro centerstage for an impromptu guitar dual towards the end of the song.  It was impressive to hear them firing off riffs at one another, and hearing the same riff played on bass versus guitar. Seeing that had me thinking….Vixen really hit the jackpot of line-up changes when they brought guitarist Brittany Denaro (aka “Britt Lightning”) into the fold. I really can’t say enough good things about her playing and showmanship. Each time that I’ve seen the band perform, she’s absolutely slayed every song on the guitar and demonstrated a musical prowess that is awe-inspiring. Since I’m not a musician, to watch another human being create the music that we, the fans, revere can only be described as wizardry. Those that play the guitar may feel differently, but to my eyes and ears it’s the very best aspect of a live performance. She also has a great onstage chemistry with the other members.

Vixen finished up their show with a track from Rare Vintage, “You Ought to Know By No.” Or so they would have had us think it was the last song.I knew there was no way they were going to actually wrap without playing their biggest hit. Back to Rare 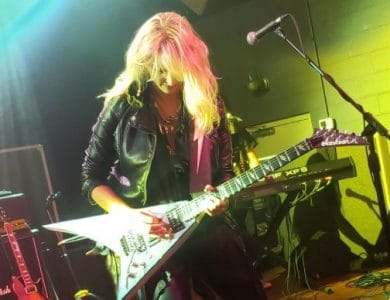 Vintage, it features a lot of unreleased music from the Vixen vaults. I’ve never heard it, but if this song is any indication, I’ll have to give it a listen. Until this concert, I wasn’t aware that Rare Vintage even existed. Based on the sound of this song and the album cover, I’d venture to say that the tracks were recorded pre-debut or around that era. Following the end of the song, the band thanked the audience for coming out and the club went dark until the crowd began to shout “Vixen! Vixen!.” Keyboardist Tyson Leslie then reappeared and took his place behind his keyboard. As he began to tease the crowd by tinkering on the keys, the sounds slowly became more familiar before becoming what is the intro to “Edge of A Broken Heart.”

At the end of the day, I was happy that I had made the call to go to the Vixen show. I really wanted to see American Jetset and L.A. Guns too and it was a tough choice to make. Vixen were fantastic though, and I had a fun time catching the band. The ladies are currently at work on a new, as-yet-untitled studio album — their first with Lorraine Lewis on lead vocals. I’m looking forward 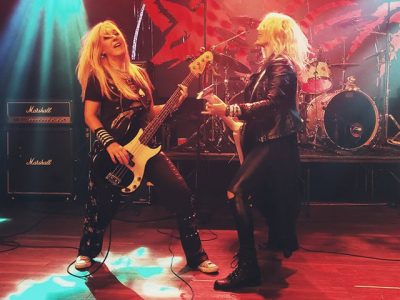 to hearing what they come up with.

Trivia question: Bassist Share Ross has been involved with several side projects over the years that have released albums. What are the names of those three bands? No cheating!

Vixen performing “I Want You To Rock Me” live at Club XL in Harrisburg, Pennsylvania, USA on November 8, 2019: