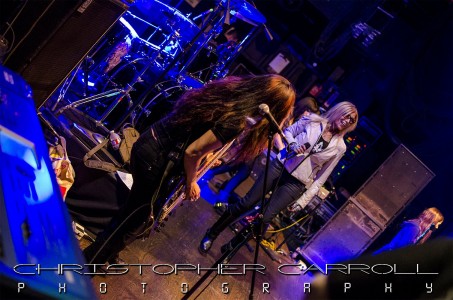 On January 21st, the lights went down and the soft chiming of the keyboards heightened our anticipation. For the first time ever, Femme Fatale were to play with Vixen. Two incredibly entertaining bands in one night at the House of Blues in Anaheim, California and I flew all the way across the country just to see it.

Just an hour earlier, I had been granted access ‘behind the curtain’ so I stood on the side stage watching the amazing women of Femme Fatale warm up and do several songs for their sound check. Lorraine Lewis was singing, dancing and just feeling out the stage until her roam became natural. These ladies quickly found their groove, had some fun and then retreated to their dressing room to ‘doll up’. 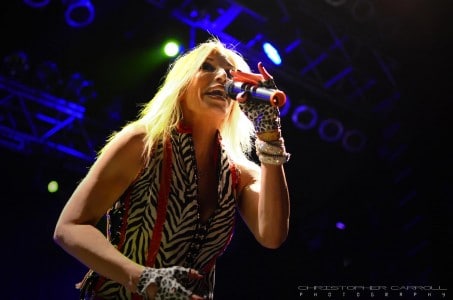 Fast forward about an hour and through the graceful gateway of the keyboard interlude, to a packed house, Femme Fatale kicked the door down with the high energy single “Fallin’ In and Out of Love!” Nestled safely between two guitar daredevils (Courtney Cox and Nikki Stringfield who both do double duty in the Iron Maidens) and perched on the solid beat of former L7 bassist Janis Tanaka and drummer, reality star and all around mad woman Athena Bass, Lorraine used every inch of that stage to tell her story. The show was like a love letter to her fans who packed the place as Lorraine seemed to grab the audience by the hand and walk them, step by step through her heart where these songs live. You can just feel that fact that Lorraine loves her fans. 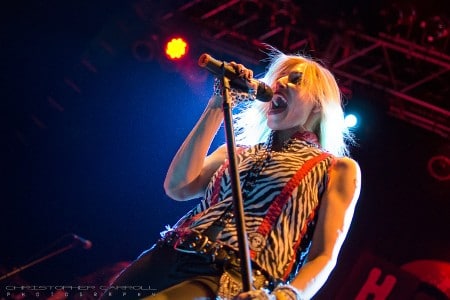 Lorraine has a dynamic stage presence. She didn’t slow down for a second. Ever the entertainer, Lorraine owned that stage and all of the ladies, at the top of their game, played like seasoned professionals.

Courtney and Nikki looked and sounded great as they played the songs with a touch of sass. These are fun songs and the band kept that vibe throughout the show. The energy from the audience was infectious to Lorraine and she made sure to throw it back ten fold! Behind Lorraine, Athena could barely stay on her throne. She’s an energetic woman and she shows it in her playing. Janis was right with her every step of the way as she seemed to melt into her playing and keep the beat alive. Katt Scarlett, an amazing keyboardist and vocalist who attended Berklee College of Music rounded out the sound while never losing her captivating, trademarked ‘unaffected’ glance. I love that about her. 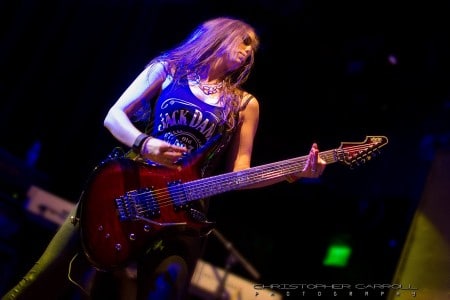 A nice surprise came when, in order to spotlight Femme Fatale’s upcoming release (the much anticipated follow up to their self-titled album, this ‘new’ album was actually recorded in 1989 and is tentatively titled Lady In Waiting — WHAT a gift?! A time capsuled album from the height of the ’80s!), the band played several songs off the new album and they were awesome. It was at that time that Lorraine pointed out that her younger brother was in the audience. This show could have gone on for hours and it wouldn’t have been to long for me. The ladies kept it incredibly fun, energetic and quite entertaining. They have a blast onstage and the audience can’t help but have one as well!

Femme Fatale Waiting for the big one 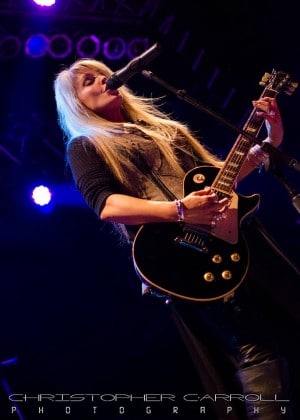 I was sorry to see Femme Fatale leave the stage but the night wasn’t over. When I first arrived, I walked into the venue while Vixen were doing their sound check. At the time, aside from the soundman, I was the only one in the room. It was surreal to see them going through six or seven songs at their leisure. At one point, they took a minute to practice a harmony with no instruments and it was simply perfect. It wasn’t difficult to see that these ladies have this down. The songs were incredibly tight.

Once Vixen took the stage, I noticed they’d changed clothes (and was surprised because I thought they looked pretty rockin’ at sound check)! In addition to the new outfits, that impressively appeared to be from the same designer as they shared some common traits, they brought with them a confidence that afforded 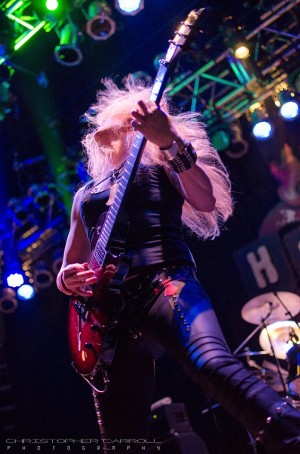 them the ability to sink into the songs and have fun with them. Frontwoman Janet Gardner seemed to be in very high spirits and bassist Share Ross had a hard time keeping the smile off of her face. Although I’ve seen Vixen several times before, this time, I was very impressed to notice Share handling the background vocals and harmonies with such power. They were definitely a highlight and made me enjoy the song “Rev It Up” even more than ever.

Roxy Petrucci is such an underrated drummer. She is one of those ‘pocket’ drummers, the ones that play so deep in the pocket that it pulls you emotionally into the songs. Roxy’s hard hitting mixed with the incredibly thick bass sound that Share gets really sets up a platform for guitarist Gina Stile to just go wild… and she does! If there was a contest, I might have to assume Gina is the one having the most fun onstage. She lets it all out onstage and you can tell the fans appreciate that about her. She’s bending backward, she’s on the floor, she makes more ‘guitar faces’ than any guitarist I’ve ever seen and it all seems to be an extension of her playing. 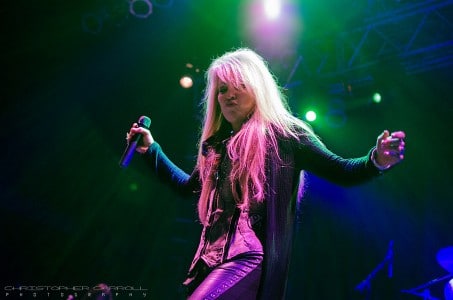 Everyone thinks they love a few Vixen songs until they see the band in concert, then they realize they love at least 20 of them! The show was packed with great song after great song and Janet’s emotional delivery just sucks you into each one of them. You live those songs as she’s singing them. Janet’s voice is phenomenal! It has all the clarity she needs and the ‘grit’ when she wants it. She never reached for a single note, she just delivered them perfectly. If her sultry stride was any indication, Janet was having a great time onstage and the audience was right there with her. At the point in the show where Vixen does the ‘sing along’, Janet will sing a line from a hairband song and the audience will respond. When she pulled out a lyric from a Poison song, I looked to my right to see C.C. Deville 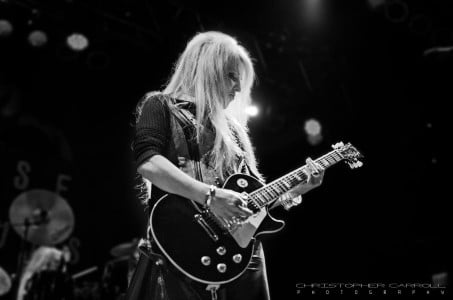 standing there, smiling and singing along. He was bobbing his head the whole time and watching the ladies like he was studying them. Once when she was giggling, Janet let us know that the reason was that when she looked at the set list Roxy had written up, it distracted her because Roxy had adorned it with penis drawings.

The ladies of Vixen always stop to honor Vixen founder, Jan Kuehnemund, who died as a result of cancer not long ago. This time, though, before playing “Love Is A Killer”, they introduced Jenna Sanz-Agero. When the band split, Jan found a new singer in Jenna. For this song, this night, Janet and Jenna sang the song together, trading vocals and it was really impressive.

Two amazing ‘all female’ bands in one night! That doesn’t happen often… but it WILL be happening one more time as Femme Fatale, Vixen and Lita Ford get together to play River Cree Resort & Casino in Edmonton, Alberta, Canada on Saturday, February 20th.

Janet and Vixen pay tribute to Jan Kuehnemund with Jenna Sanz-Agero at the House of Blues in Anaheim, California. “Love Is A Killer”Janet Gardner – lead voca…