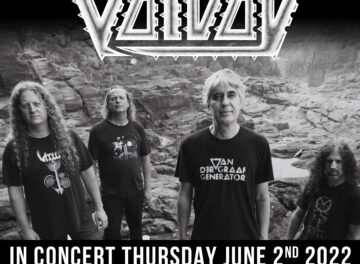 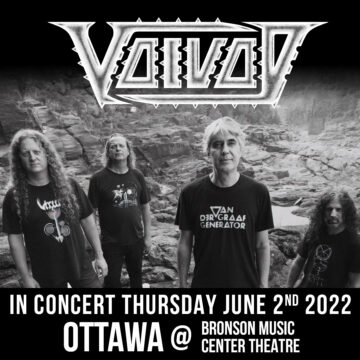 Touring in support of their new album Synchro Anarchy, Quebec’s legendary progressive metallers Voivod pulled into Ottawa’s Bronson Centre Music Theatre for a long-overdue appearance in the nation’s capital. I was completely stoked for this show, having seen the band many times over the years, including a legendary 1990 show at Carleton University with opening acts Faith No More and Soundgarden!

Opening the show were local group Sunset Hate, who performed a shortish but solid set of thrashy metal. Next up were the intriguing Year of The Cobra … a two piece group from Seattle featuring drums and bass. Bassist Amy Tung Barrysmith provide atmospheric vocals over the group’s doomy songscape. An interesting opener for sure!

Now to the headliners … Voivod’s line-up is now secure with veterans Away (drums) and Snake (vocals) joined by Chewy on guitar and Rocky on bass. While people were lined up waiting for the doors to open, Chewy walked down the line, thanking the punters for coming up. It was a great touch!. The band opened with back to back classics from Dimension Hatross – “Experiment” and (my fave tune from the band) “Tribal Convictions.” What was immediately apparent was the incredible tightness of Voivod playing these technical epics, as well as the masterful playing of Chewy, a worthy replacement for the greatly missed Piggy (R.I.P.). The band played three songs from their new record — the title track as well as “Planet Eaters” and “Sleeves Off”. They ended their 11-song set with probably their best-known tune, a cover of Pink Floyd’s “Astronomy Domine” from 1989’s Nothingface. After a short break, and the crowd’s chanting, Voivod returned to perform, of course, “Voivod” from their 1984 debut War And Pain. This one really got the active moshpit going!

It was a great night provided by this Juno Award winning band. They are Canadian legends loved by many including Dave Grohl. The Bronson Centre Music Theatre provided a pleasant surprise with respect to the changes to the venue as it has become the local go-to for touring bands. It’s a great addition to the Ottawa scene, with excellent sight lines and a very efficient PA system. Definitely looking forward to more shows at this great spot!