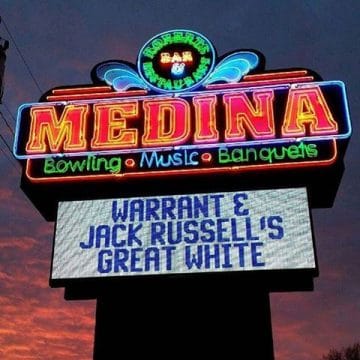 Jack Russell’s Great White got things started with “Call It Rock ‘N’ Roll” from the fantastic album Hooked. The band came out with guns ablazing to a little over half packed venue, but that didn’t stop them from giving the crowd that was in attendance a 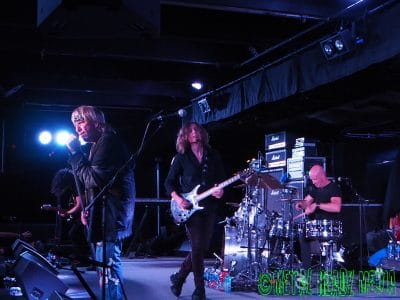 110% (even if most of them were sitting in their chairs). Jack Russell was covering every inch of the stage and was twirling and swinging his mic stand as if he was on an arena stage. “It’s All Over Now” and “Desert Moon” kept the momentum going with Russell and his band sounding amazing. Russell then took some time to introduce his band to the crowd. Dicki Fliszar was on the drums and Dan McNay was playing the bass. These two have great chemistry and kept the rhythm going all night.   Russell then introduced, Robby Lochner, as the next guitar virtuoso and was blessed to have him as his guitar player. Last, but certainly not least, was Tony Montana on guitar. Montana is the only member of the band to play with Russell during his time in Great White. During that time, Montana handled bass duties, but for this version of Great White, he is playing the guitar, keyboards, harmonica, and vocals during “Mista Bone” and a cover of Hendrix’s “Voodoo Child.”

Jack Russell’s Great White is out on tour in support of its new release, He Saw It Comin’, which the group did play two songs from. “Sign Of The Times” and “My Addiction” were great song choices to be added to the set. Most of the crowd was not familiar with these two songs, but Russell informed them that if they enjoyed what they heard, they could buy the album at the merch table. I believe they might have sold out because when I was walking out the door, I did take a look at their merch table and didn’t see any copies of their new album left. 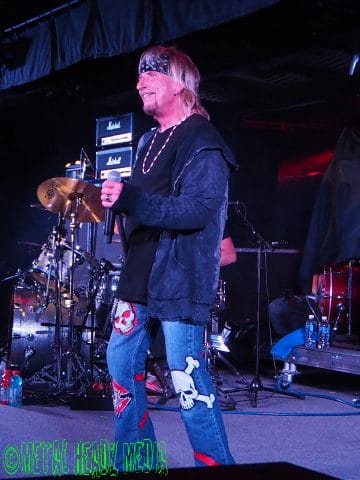 Halfway through their set, it was time for Lochner to show us just how talented he is. He played an unforgettable guitar solo that left me speechless. Lochner is a gifted guitar player and now I know why Russell is so blessed to have him in his band. Not only can he shred the guitar, but he also has the stage presence that many guitar players wish they had.

One of the highlights of the night was when they played “Lady Red Light.” This song got the crowd on their feet and we were loving every second of it. I was anticipating the band to keep the momentum going, but when the song was over, Russell told the crowd they could sit back down because it was time for some blues. The band then broke into “House Of Broken Love,” off the Twice Shy album.

Before their set was over, Russell informed the crowd that the song he is most proud of and is the backbone for the Great Whit sound is “Rock Me.” He also went on to say how he misses the ’80s and that rock music will never be like that again and that his hair will never be that long again! The closing song was none other than “Once Bitten Twice Shy.” The crowd got back up their feet and started to sing right along with Russell.

Jack Russell’s Great White sounded absolutely amazing that night. I was blown away that Russell still has his pipes and can belt out all those classic songs as if you were hearing it from the album. Not only do they sound good, but they have a strong stage presence and you could tell that each one of the band members enjoyed playing on that stage for the fans. If any of you are skeptical if “Jack still has it?”  — take my word that he does as he delivers it every night. 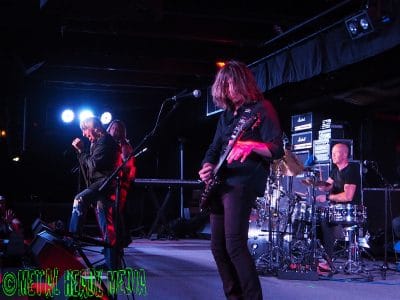 Since this would be my third time seeing Warrant within a year, I had an idea of what their show would be like. Just like my previous reviews of their shows, I know they will always give it all they got and sound phenomenal live. But, they did throw me 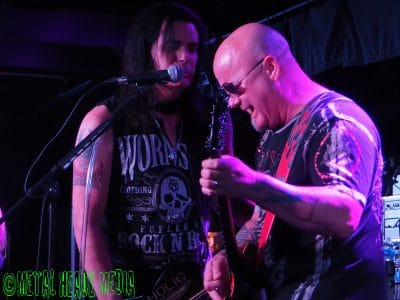 off a little bit by throwing in a few songs I was very happy to hear in their set list — more on that later.

The intro music that was playing prior to Warrant hitting the stage, sounded like it could be a song from their up-coming release Louder Harder Faster. It was a song that I have not heard before, but the vocals sounded a lot like Robert Mason. I liked what I was hearing and can’t wait to hear that album when it drops on May 12th. When the song ended, Warrant hit the stage and went right into “Down Boys.” They kept things going with another track from D.R.F.S.R. — “Big Talk.”

Like I was mentioning before, the tables were set up right in front of the stage, and Mason was joking how he could just take the drinks from the table to quench his thirst. Then he stopped and said he had his own drink of choice for the night, and ran back behind the stage to grab a bottle of Patron. He took a big swig and then the band played “Sure Feels Good” from the Cherry Pie album. Next up was a song I have not heard live in a long time — “Machine Gun” — from one of my favorite Warrant albums Dog Eat Dog. This song came off great live and I hope it is one that they will keep in their set for many years to come. Another song that 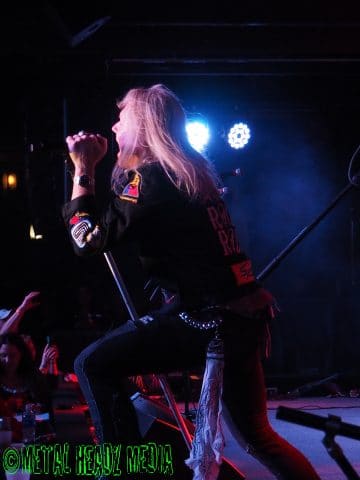 was performed from Dog Eat Dog was “Hole In The Wall.” I was in shock once I heard them break this song out. It is one of my favorite songs from that album.

Erik Turner and Joey Allen were trading guitar licks during the night and each had their moment in the spotlight while playing all their hits. Jerry Dixon was keeping the beat with fill-in drummer Chris Beall. Steven Sweet is still recovering from his surgery he had a few months ago, and hopes to be back out on the road very soon. I know it is almost impossible to replace someone like Jani Lane, but Robert Mason is doing a fantastic job as the frontman for Warrant. He has the voice that does justice to all the songs that we feel in love with in the ’80s and early ’90s.

The rest of the night, the fans got to hear their favorites such as “So Damn Pretty (Should Be Against The Law),” “I Saw Red,” “Rainmaker,” “Heaven” and many more. Warrant did play a new song from their new release — “I Think I’ll Just Stay Here & Drink.” This was the first song that Warrant made available to their fans and it is a cover from the country legend Merle Haggard.

Not only was this night special for Warrant fans, but it was also a special one for Erik Turner. It was his birthday and the band made sure to celebrate it. Turner’s family was in attendance and his son came out on stage to present him a small cake and got the crowd to sing “Happy Birthday” to Erik. When we were all done singing, the band began to spray silly string all over him. All he could do was laugh about it and rip right into “Cherry Pie” with silly string all over his guitar as well. Check out the Facebook video below to see some of the shenanigans that went down that night. 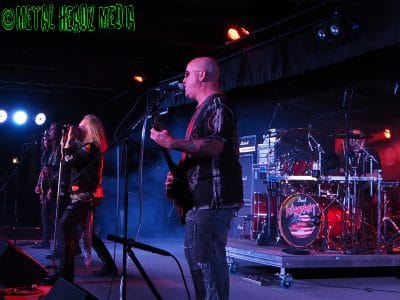