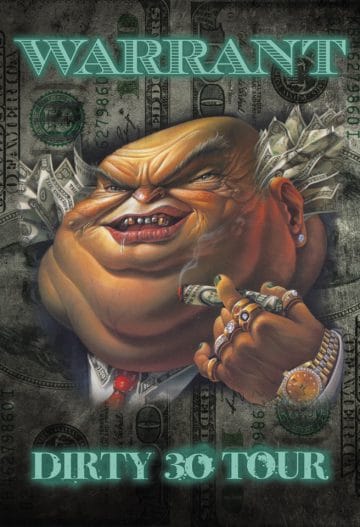 Warrant made a stop in Corcoran, Minnesota on their Dirty 30 Tour. They brought along their friends Firehouse and played at Corcoran Country Daze; an event that has a car show, fireworks, a petting zoo for the kids and numerous other activities.

My wife and I pulled into the field that was being used as a parking lot and to our surprise, it wasn’t very full. We knew we were early and local bands Bjerke and The Ripsters and Hoodlum Johnny were there to warm up the crowd. By the time we got to the stage area, we notice we missed the first band and Hoodlum Johnny were wrapping up their set of barroom rock and roll. We made our way through the small crowd and ran into a few friends we hadn’t seen in a while. We got a few drinks and got caught up on what everyone had been doing and what shows everyone had been to since we last met up.

The sun started to go down and FireHouse took the stage and kicked the night off with “Overnight Sensation.” C.J. Snare belted out the opening scream with ease and really hasn’t missed a step since this band’s inception. A couple fireworks went off to 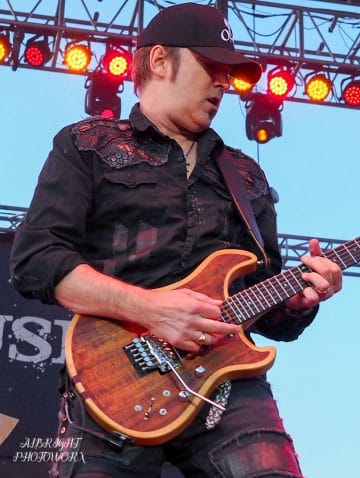 help signal the start of the show. “Crash” off of their 2003 release Prime Time continued the pace along with a trio of songs from their debut album. The crowd sang along to “Shake & Tumble”, “Ought To Be A Law” and “All She Wrote.”

By this time, I was done taking pictures, so I got my first look at the crowd since the band started. I was happy to see that it was starting to fill in as they made their way through “Love Is A Dangerous Thing” before slowing it down with “When I Look Into Your Eyes.” The band sounded very tight, which isn’t a big surprise after playing together all these years. The funniest part of the night was C.J. kept mispronouncing the city’s name between songs. He kept pronouncing it as “Cockrin” but eventually caught himself and said “I mean Corcoran (pronounced core-crin); but Cockrin sounds better” and let out a loud snicker.

The rest of their set was filled with many more familiar songs which included two of my favorites, “Reach For The Sky” and “Lovers Lane” featuring drummer Michael Foster with a little double kick drum action. Bassist Allen McKenzie helped hold this together and Bill Leverty ripped through his guitar solos with ease. The set was rounded out with the hits and ballads. “I Live My Life For You” and “Love of A Lifetime” had the crowd swaying back and forth before “Reach For The Sky” and “Don’t Treat Me Bad” got the crowd rockin’ again and pumped them up for Warrant. They thanked the crowd for all the support over the years since they are Minnesota’s house band since they play here a minimum of five times a year.

Snippet of FireHouse performing “Don’t Treat Me Bad” live at the Corcoran Country Daze in Corcoran, Minnesota, USA on August 17, 2019: 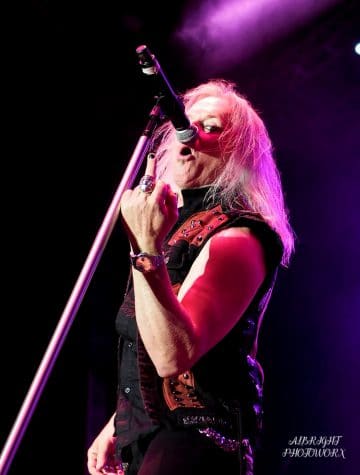 A nice firework display led into Warrant hitting the stage. Since it’s the Dirty 30 Tour, celebrating thirty years since their debut album came out; it was no surprise that the first half of the set was all from Dirty Rotten Filthy Stinking Rich. “32 Pennies” and “Down Boys” rocked the speakers and got the crowd excited. As I peared through my camera lens, I noticed Robert Mason giving me the side eye as he raised his middle finger, followed by a devilish shit grin. My fellow photographers say that is the biggest compliment an artist can give you and I’ve seen many fingers over the years.

“Big Talk” was up next and I noticed that bassist Jerry Dixon was not on stage and a very unfamiliar face had taken his place. Through a few texts, I had discovered that Jerry had hand surgery and would be back with the band the following week. In his place was none other than Kevin Baldes from the band Lit. He was having a great time owning the stage and throwing guitar picks to the kids of my good friend in the front row. “Sometimes She Cries”, “So Damn Pretty (Should Be Against the Law)”, “D.R.F.S.R.”, “Heaven” and “Cold Sweat” completed the songs from that first hit album.

Another thing I noticed as they played “Ridin’ High” was Steven Sweet was behind the drum kit. The last two times I saw them, he was not with the band. It was nice to see him on stage with the other three living members of the band. “I Saw Red” had the crowd singing louder than any other time of the night so far. At this point, Robert announced that there was some bad weather headed our way and they were going to do their best to get through as many songs as possible. They 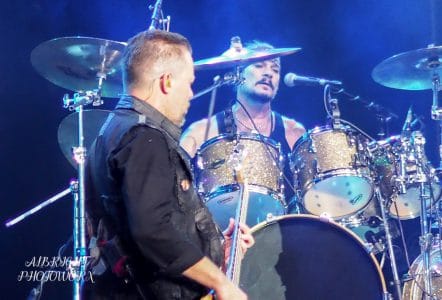 proceeded to kick it into high gear with Erik Turner and Joey Allen taking turns playing rhythm and guitar leads through “Only Broken Heart”, “The Hole In My Wall” and the ass kicking “Louder Harder Faster” off of the album that shares that very same title.

“Blind Faith” would slow things down one last time and give couples one more chance to hold one another close as they remembered and missed the great Jani Lane. The sentimental moment wouldn’t last forever because there were some more great rock tunes to be played. Banjo twang overtook the speakers as the crowd roared in anticipation of “Uncle Tom’s Cabin.”  Heads bobbed and hands thrust into the air to the beat of this backwoods story song. The crowd sang the loudest of the night as the band closed out its set with “Cherry Pie” and I’m sure a lot of the guys in the crowd were picturing Bobbi Brown getting a slice of pie dropped into her lap. 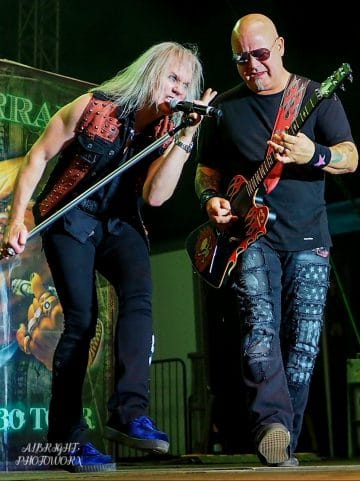 It was a beautiful evening for an outdoor concert and it ended with plenty of time to spare before the rain began to fall. Minnesotans have to enjoy these shows while we can, because we all know the cold weather is right around the corner.