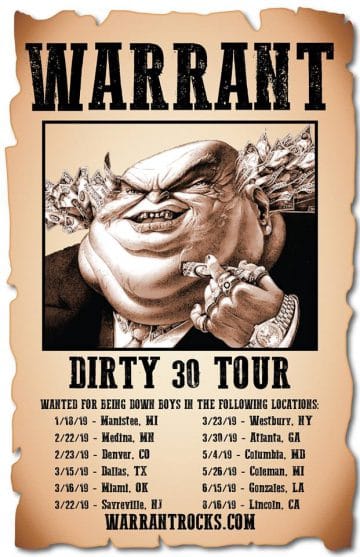 Warrant’s Dirty 30 Tour stopped at the Medina Ballroom on Friday February 22nd. This tour is to celebrate the 30th Year Anniversary of their 2x platinum debut album Dirty Rotten Filthy Stinking Rich. It is hard to believe that this beloved album is already 30 years old. I still remember listening to the cassette (in my walk-man, remember those?) while mowing the yard and during road trips with my family. That can’t be 30 years ago, can it?

Dare Force, who are veterans in the rock music industry, were first to take the stage. This Minneapolis/St. Paul based band was formed over 30 years ago and had some success in the ’80s performing with Ted Nugent, KISS, Kansas and Ratt. Dare Force filled their set with songs from their earlier released albums, cover songs, and tunes from their new album Callin’ Your Name. Dare Force do have a loyal following in the Twin Cities, as I saw many fans wearing their shirts to support the band. Dare Force did a great job in setting the mood for the night, and that was to get everyone ready for a kick ass rock n’ roll evening.

Hericane Alice are another band to hail from the Twin Cities with some success from the late ’80s and early ’90s, with their debut album Tear The House Down. My first exposure to Hericane Alice was when they opened for Britny Fox, on their Bite 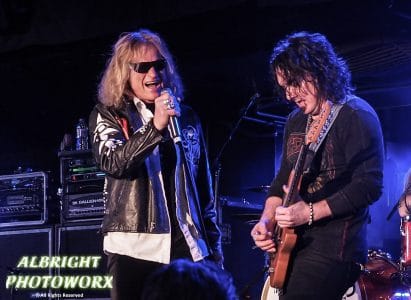 Down Hard album, in Pipestone, Minnesota in either ’91 or ’92.  I became an instant fan and knew I had to get my hands on their album, and within a few days I had my copy of Tear The House Down on cassette.

Hericane Alice are back and better than ever! They have been “Tear(ing) The House Down” the last few years with shows in the mid-west on their own headlining gig or opening for national acts when they come to town. Just like the last few times I saw them live, they kicked things off with the cover of “Radar Love.” They do this song justice and got the crowd ready for their set. “Give Us What You Got” was next, and is a new song that will be featured on their new album. Hericane Alice filled their set with songs from Tear The House Down and a few other new tunes that I was not familiar with (must be songs for the new album), and they sounded amazing. Another cover song they love to throw in is “Highway Star” from Deep Purple. To end their set, Hericane Alice played the fan favorite “Wild Young And Crazy.” This was another great performance by Hericane Alice, and I can’t wait to see them again. 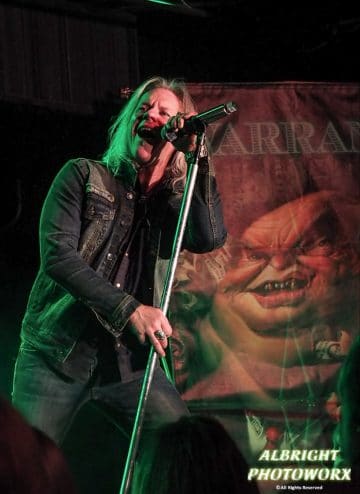 Dare Force and Hericane Alice did a great job of getting the crowd ready for the headliner, Warrant. When the lights when out, I heard the loud cheers of Warrant fans over the sounds of motorcycles revving through the house speakers. Prior to the band hitting the stage, vocalist Robert Mason screamed “Do you know what time it is? It’s Dirty 30 time.” Right after that, the band stormed the stage and went right into the first song off their debut album “32 Pennies.” Since this tour is to celebrate D.R.F.S.R., I was curious to find out if they would play the album in its entirety. To my surprise, “Down Boys” was next and they proceeded to continue playing the album in sequence. That was until they played “D.R.F.S.R.” because the next song on the album is “In The Sticks,” but they left that out of their set. “Ridin’ High” was another track they left out, but they did play “Cold Sweat.”  That was the first time I have heard Warrant play that song live and they did a fantastic job with a song they haven’t played live in many years. Guitarist Joey Allen even commented on how long it has been since they played that song live.

Now that songs from D.R.F.S.R. were done, it was time for Warrant to play songs from their other albums. “Sure Feels Good To Me” kept things rockin’, then things slowed down a bit with “I Saw Red.” Mason asked for help singing this song, and he was answered by seemingly everyone in the audience singing along. “Only Broken Heart” heated things back up, and one of my all-time favorite Warrant songs, “The Hole In My Wall,” kept the crowd burning for more. Mason told the crowd that putting out new music is something they love to do, and would like to play the title track from their new album Louder Harder Faster. 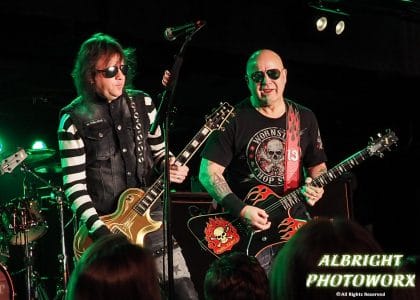 Guitarists Erik Turner and Joey Allen did an amazing job trading off solos throughout the night. They commanded the stage with the help of bassist Jerry Dixon. Drummer Steven Sweet was absent as he is still recovering from his illness. Allen did make an announcement that Sweet is now cancer free and hopes to join the band on the road real soon. Congrats to Sweet for beating cancer’s ass! Chris Beall has been filling in for Sweet on the drums, and they even mentioned that this was his third time playing with Warrant at the Medina.

After the announcement that Sweet is cancer free, Mason made an introduction to his favorite song to play live, –“Blind Faith.”  When the song was done, the band members left the stage to get ready for their encore. The sound of crickets chirping along with the strumming of a banjo was playing over the speakers, and one could only guess what song was coming next — “Uncle Tom’s 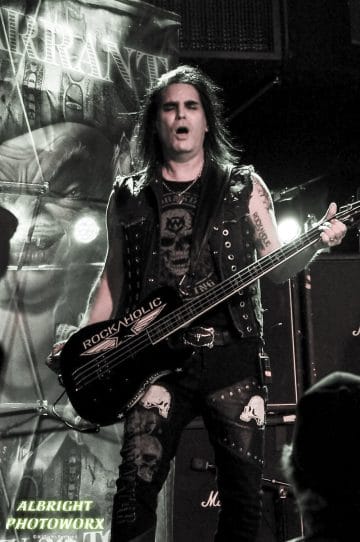 Cabin.”  The staple closer “Cherry Pie” completed the night for Warrant. For everyone that has seen Warrant live, they know they will never disappoint. They always bring their A game and want their fans wanting more, so they know they will see them again the next time they come to town. I for one, will be there!!