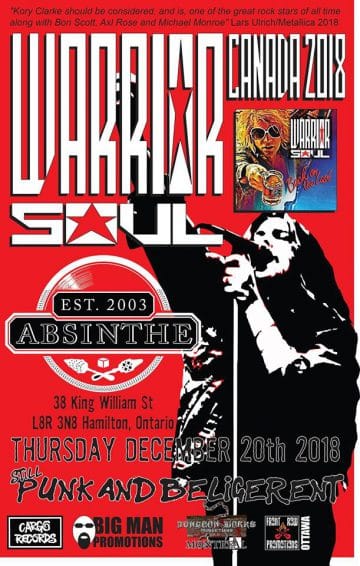 Warrior Soul have seemingly always had a cult like following with their fans being really passionate about the band — or really lead vocalist Kory Clarke who revived the band name back in 2007 and has been touring and recording with a revolving cast of musicians ever since. Although Warrior Soul released a bunch of albums in the 1990s, it wasn’t until Clarke released last year’s Back On The Lash album that I really took notice of Warrior Soul. That and my friend Bruce advising me a while back that he had flown from Canada to London, England in large part to witness Warrior Soul play an intimate gig to celebrate the release of their last album. Warrior Soul definitely have some passionate fans and I was witness to that at the group’s gig at Club Absinthe in “Steel Town” otherwise known as Hamilton, Ontario, Canada.

Warrior Soul were scheduled to play three shows in Canada from December 20 to 22, 2018, which represented the group’s first gigs in Canada in I believe 27 years or at least two decades. The three Canadian tour stops were preceded by three shows in the US. I wasn’t sure what the turnout would be for Warrior Soul‘s Canadian dates given that it was so close to Christmas and there always seems to be so many Christmas parties to attend around that time. I do recall Sebastian Bach playing a concert in Toronto in 2014 that was only four days before Christmas and that was well attended. However, you have to take into consideration that the ex-Skid Row singer is still riding the wave of a couple of multi-platinum albums from his former band, he has continued to tour pretty consistently and he grew up in the neighbouring city of Peterborough so playing a show so close to Christmas in Toronto was likely not going to impact Bach‘s ticket sales.

I had never been to Club Absinthe in Hamilton so was looking forward to checking out the venue. It was pouring rain as I left home at around 9:40 pm for the roughly 45 minute drive to Hamilton. Neurotic Entertainment had posted earlier in the day that the last of the three opening acts would begin at 9:30 pm so I knew that I was cutting close for Warrior Soul‘s set. As I made my way into Club Absinthe, I was greeted by Neurotic Entertainment‘s friendly principal Karina Davy who remembered me from the first ever gig that Neurotic Entertainment held four and a half years ago (Hessler, Rusted and Ammo at the interesting Izakaya Sushi House venue in Toronto). Since then, Neurotic Entertainment has held a large number of concerts in the greater Toronto area but with bands on the sometimes much heavier side. I never thought that it would be four and a half years until I attended another Neurotic Entertainment event, especially after the totally enjoyable Hessler and Rusted performances, so I was happy to see the event promoter hosting some more Sleaze Roxx friendly bands once again. 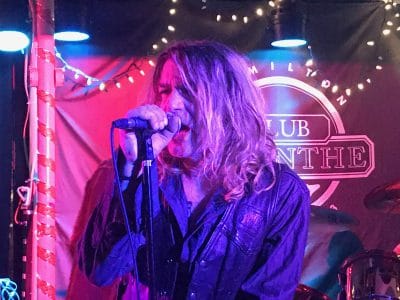 It was difficult to gage how many people were in Club Absinthe given that all the patrons were spread out throughout the venue. Before long, I saw The Last Vegas guitarist Adam Arling take to the stage to presumably get his guitar rig ready. Arling looked exactly like when I first met him two and a half years ago at the This Ain’t Hollywood venue in Hamilton. He was tall, lanky and dressed in black from head to toe. With The Last Vegas seemingly on hiatus with singer Chad Cherry now living in Los Angeles, California, it seems that Arling has been keeping busy doing other musical projects including being part of Hessler‘s “touring” or “gigging” line-up (as a bassist) and as part of the latest Warrior Soul line-up. Given that Arling seemed so focused on his tasks, I didn’t bother interrupting him. Soon enough, the bassist (whom Clarke later advised originates I believe from Scotland) was on stage as well. I should mention that while fans waited for Warrior Soul, the music coming from the P.A. was fantastic with some W.A.S.P. and Megadeth amongst the tunes played.

Eventually, Arling started playing a guitar riff over and over again and that was everyone’s cue that the concert was starting. It took a little while but Clarke eventually made his way to the stage. The man looked like a rockstar. He had a very small frame, some tighter jeans, I believe cowboy boots, a largely unbuttoned shirt and a jacket with some brown fur at the collar and bottom. The unshaven Clarke got up on stage with a tall boy beer in one hand and an additional tall boy still in the plastic that would have held six of those tall boys. I don’t know if Clarke downed those other beers before taking to the stage but his microphone stand was knocked down — perhaps purposely — a few times during the beginning of the set. Clarke reportedly has a reputation as a great frontman and he didn’t disappoint. The man has tons of energy, moves around quite a bit and was able to push the audience to come close to the stage. The Club Absinthe stage was located in one of the four corners of the venue’s ground level in a triangle shape. It reminded me of Toronto’s Rockpile venue except there were windows behind the Club Absinthe stage rather than the darker walls at The Rockpile. 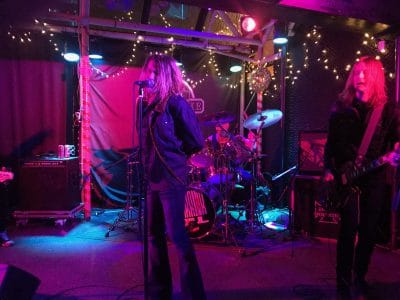 Although I wasn’t really familiar with much of the Warrior Soul material played on this night, the songs were enjoyable to listen to and there were definitely some people in the audience that knew all of the words to most of the songs. One person even brought a tray of shots to the stage with a handwritten note asking for Warrior Soul to play the song “Love Destruction.” The gentleman verbally advised Clarke that he had waited more than 20 years for Warrior Soul to play that song live. Clarke replied by hinting that the track would be played but later in the evening. The entire band backing Clarke including Arling looked like they were having a great time. Clarke was quite adept at getting the crowd to clap along and to raise their fists at appropriate times during the concert.  Although there weren’t that many people in the audience (I counted less than 50), the ones that were there were quite into the show. I was impressed with Warrior Soul playing such a long set despite what was likely deemed as a disappointing turnout in terms of numbers.

At the beginning of the concert, I was keeping track of the songs that were being played and I wish I would have kept on doing so because I forgot to try to obtain a setlist at the end of the show. Thankfully, promoter Bruce Hotchkies came through with the setlist for the Hamilton gig. My favorite songs played by Warrior Soul in Hamilton were “Back On The Lash”, the fist pumping “Ass’-Kickin'” and the newer Clarke solo song “Payback’s A Bitch.” Overall, Warrior Soul put on a great set and I hope that they come back to play the greater Toronto area again in the future.

Warrior Soul’s setlist:
01. American Idol
02. I Get Fucked Up 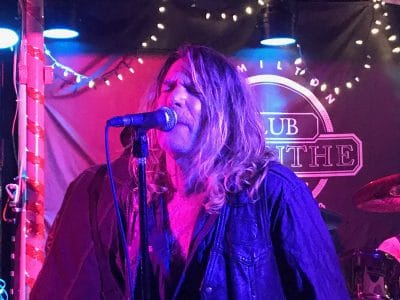