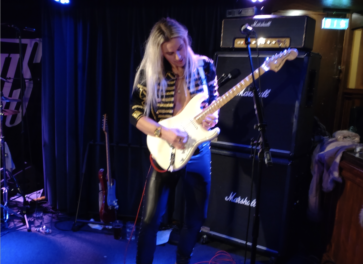 NOTHING BUT A GOOD TIME WITH WILDNITE AND NOTÖRIOUS IN BERGEN 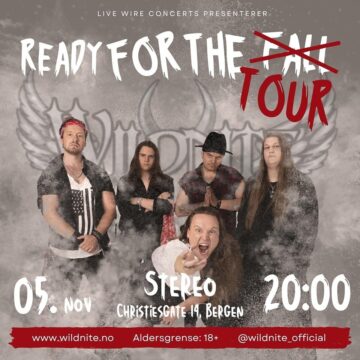 You can blame it on the rain or on something in the air, but glam or hair metal if you will, hasn’t thrived in Bergen for years, if ever. Many other types of rock and metal do thrive here but glam is not one of them. There shone, however, a tiny ray of hope in the summer of 2019 when four youngsters from Notörious first appeared on the local scene. They have grown into a promising young band since then and built a sizable local following. Recently, they have joined forces with Wildnite, fellow hard rockers from Oslo, and put together a series of dates across Norway under the tour moniker ‘Nothing But A Good Time’. The tour was launched at Stereo in Bergen on one drizzly Saturday afternoon early in November 2022.

Stereo is a newly revamped club formerly known as Garage. It has a bar upstairs and a stage and a bar downstairs, which means it hasn’t really undergone much overhaul since the Garage days. I was still very glad to see that Stereo is happy to host such old school events as a stop on the Notörious and Wildnite tour.

Wildnite’s set consisted of tracks from their both albums — Wildnite and Symphony of Apathy — and a few cover tunes. The show began with a taped intro entitled “Paroxysm” which also opens their second album Symphony of Apathy. The five of them — singer Baron Sobye, guitarists Magic Mick and Fredrik Løkken, bassist Nikki Star and drummer Eric Rotz — stormed 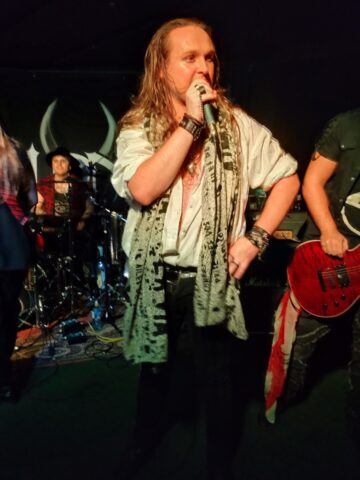 onto the stage and without missing the beat performed the first three tracks — “One And Only”, “Hero” and “War Machine” — from the same album in the order in which they appear on this album. Although I’m less familiar with Widnite’s albums, the instant catchiness of those tracks pulled me in. Right away, the singer’s magnetic presence became obvious too. Between his spastic moves, deep voice and vampire-like eyes, Baron Sobye’s runs a show which entices you until you catch yourself singing and headbanging together with him.

Midway through “F.U.B.A.R.” a technical glitch cut the power off from the band’s instruments. Temporarily unable to continue the show, Wildnite got effectively saved by drummer Eric Rotz who kept up the beat and entertained the crowd. After a few minutes the power was restored and the band, rather than continue “F.U.B.A.R.”, tore into an impassioned rendition of Twisted Sister’s “We’re Not Gonna Take It”. The temperature at the club instantaneously rose a few degrees as everybody seemed to know the lyrics to that classic and snapped at the opportunity to belt them out.

The rest of the show continued smoothly. Some of the titles of Wildnite’s songs are the same as those of some well known tracks and I was wondering whether the final track would be a cover of Ratt’s tune but “Back For More” turned out to be one of Wildnite’s originals. And a  pretty good one.

The brand of melodic hard rock championed by Wildnite translates very well into the live setting. They sounded tight, they got the audience pumped up for the second act of the evening and they made sure that everybody was having a fun evening. 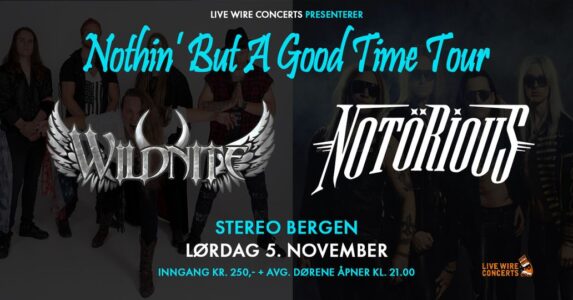 Wildnite is obviously an overall bigger band with two albums under their collective belts but in Bergen, Notörious are on their home turf so they got to headline. The band — consisting of singer Chris Houdini, guitarist Nikki DiCato, bassist Andy Sweet, and drummer Freddy Kixx — played their debut album Glamorized in its entirety plus a new track and two guitar 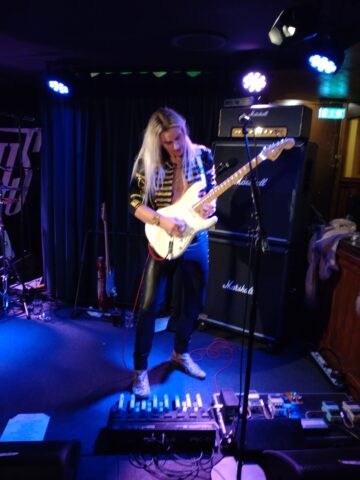 solos. Notörious launched their performance with a boisterous rendition of the eponymous track from their debut. The main chorus line goes “We Are Notörious” and, when repeatedly reinforced by the band’s gang vocals, it left no one in the audience in any doubt whatsoever as to which band was ruling the stage at that moment. I instantly knew that this evening would continue to be a fun one.

The band quickly made a segue into the only new track to be played this time entitled “Venom”. It was no premiere because Notörious had played the song live a few times before. “Venom” was a high energy follow-up and it sits comfortably alongside the familiar tracks. After a short pause filled in with the mandatory ‘How are you doing tonight?’, Notörious continued with “Have a good time” — one of the catchiest tracks in their repertoire. With easily relatable lyrics and plenty of space allowing the audience to help the band out with multiple rounds of “Woah – woah”, the track put everyone in a good mood.

Notörious had visibly grown into a self-confident band onstage over the last two years. It’s most evident when you look at singer Chris Houdini. His voice soared over the thin but mighty crowd with impressive ease while he made sure that no one present at Stereo that evening could think that ‘static stage performance’ is a phrase in his dictionary. He is a genuine frontman interacting with both the bandmates onstage and the crowd. Nikki DiCato would take over the spotlight in time for a fret-burning solo although he was more reserved throughout the show. He can shred though and he can rock hard as he clearly demonstrated in two of his extended solos. The rhythm section provided the right backbone to the band’s sound.

With the next two tracks, “Friday Night” and “I Walked in”, Notörious emerged as a tight unit with a solid heavy sound. The glam metal that they play is not always of the happy-go-lucky type, though. Their sound has dark overtones here and there, the 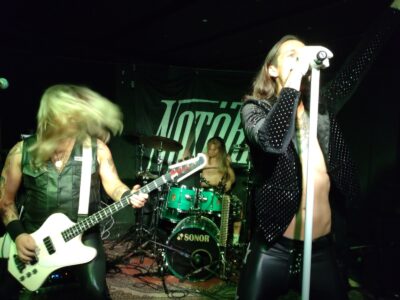 band hailing from Bergen, a city notorious for its black metal scene. These overtones materialized for example when the band crunched into the sinister opening riff to “Tonight (Gonna Get It)”. The crowd appreciated the appeal of these fast paced tracks and let the music win them over.

“Summer Nights” proved to be the highlight of the show, and quite understandably so as it is, if you ask me, the most accomplished track by Notörious. It’s a song closest to a ballad without being one. Again, Houdini let the crowd sing out the chorus multiple times while Nikki DiCato’s impeccable riffing shone. DiCato’s skills kept on shining in a guitar solo that followed and gave us a little respite before the final three tracks of the show. All the band members gave their all here with even bassist Andy Sweet, and drummer Freddy Kixx joining the singer’s efforts to incite the crowd to sing the choruses with the band. After playing “Flying High”, Notörious put away their instruments, sans encore, leaving the audience wanting more. It’s probably a smart move as in a little more than a month, they’ll be playing Bergen again.

Notörious is a more and more exciting band to watch live, full of youthful energy, with heaps of potential. The musicianship is there and so is a cohesive look. And they dress for the occasion. Andy Sweet told me after their set that they’re working on a 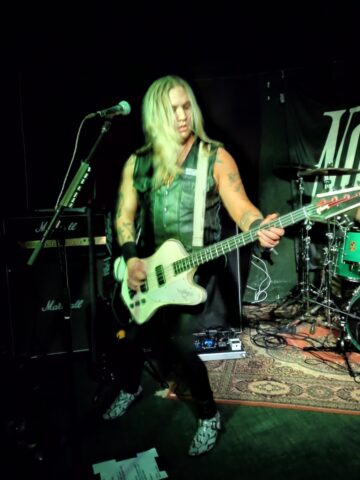 second album which will still have the glam metal sound but will also be heavier. What else can you expect? Some more touring experience should turn them into an untamed beast.

You expect a Saturday night to be a fun night and this is exactly what you get with Notörious and Wildnite, two bands which look and sound excited to be on stage and on tour.