Almost a year ago to the date, I found myself at the ​Medina Entertainment Center watching the same two bands, ​Winger and ​FireHouse​. I know these two bands catch a lot of heat from people for not being heavy enough, and in ​Winger’s case, they ended up being the butt end of a joke from television cartoon, ​Beavis and Butthead​. But if you look at the record sales of these two bands, you’ll see that they both have a very strong fan base and several hundred of them showed up Friday night to rock right along with these two talented groups. 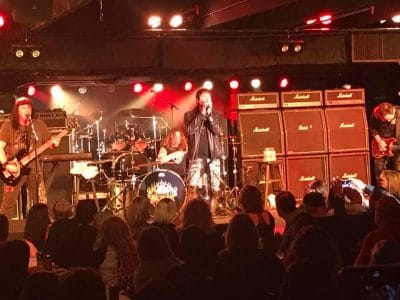 Self-proclaimed “​Minnesota’s House Band​” ​FireHouse​ have played in our great state at least five times in the last year. They took the stage and went right into “Shake and Tumble” off their self-titled debut album. Singer​ C.J. Snare sounds just as good today as he did back then. He went on to state that the majority of the songs played this night would be off that album, since they just wrapped up their 25th anniversary tour of that album. Sticking to his words, they broke into “All She Wrote,” “Outta Be A Law,” and “Rock On Radio.” FireHouse then fast forwarded to their 2003 ​album, ​Prime Time. Lead guitarist ​Bill Leverty took over vocal duties on “Holding On.” Next up was “Helpless” followed by ​Snare introducing a couple from the crowd and bringing them onto the stage. The man took hold of the microphone and quoted a few lines from the song “When I Look Into Your Eyes.’” He then took a knee in front of his significant other and asked for her hand in marriage. She replied with a “yes” and they celebrated by dancing as the band played their love song live. After a few congratulations from the band to the newly engaged couple, it was back to business.

Drummer ​Michael Foster took his turn on vocals by singing “Door To Door.” The band was firing on all cylinders and it’s hard to argue that there isn’t a better harmonizing duo than Snare and bassist ​Allen McKenzie​. They flashed back to the first album once again with “Home Is Where The Heart Is” and the fast paced “Overnight Sensation.” “Love Of A Lifetime” and “Reach For The Sky” led us down the rock and roll road to FireHouse‘s biggest radio friendly hit “Don’t Treat Me Bad” with a little bit of ​KISS‘ ​”Rock N Roll All Nite” to finish off their set.

Winger‘s setlist consisted of songs from their first two and last two albums along with my favorite “Down Incognito” from the album​ Pull. I wish they had played more of the latter, as it has become my favorite over the years. Diehard fans were entertained with newer songs like, “Midnight Driver Of A Love Machine” and “Rat Race” off their latest effort ​Better Days Comin’ as well as “Pull Me Under” and “Stone​ Cold Killer” from 2009’s ​Karma. Now I don’t know if it’s the Medina Entertainment Center or the Minnesota weather, but something has an effect on ​Kip Winger‘s voice. At times, he sounded as if he was struggling to get out the upper range notes, but on the next song, he sounded as good as ever. Nonetheless, I still thoroughly enjoyed the show along with the rest of the crowd. 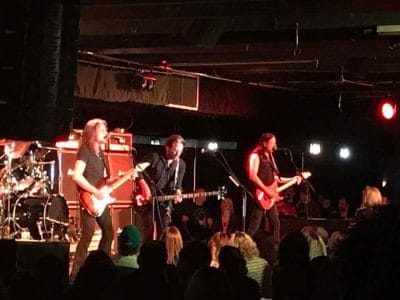 In between songs, the rest of the band members showcased their talents. ​Kip ​brought up guitarist ​Reb Beach‘s ability to come up with riffs on the spot. He told a story of when they got together for the first time to record the self-titled album. Long before he was “​Mr. Dokken​” and “​Mr. Whitesnake,​” and a few other bands ​Beach has partaken in, ​Kip asked ​Beach if he had any good riffs for a song. Beach answered his question by ripping into the intro for “Seventeen.” ​Kip told the audience that his first thought back then was “I’m going to be rich!” He then proceeded to tell us that when he asked him what he came up with while recording ​Karma, that was Beach’s cue to tear into “Deal With The Devil” which happens to be my favorite track off that album. At another point in the show, ​Kip​, the smart ass that he is, suckered ​John Roth into showing off his bluegrass, “chicken picking” guitar skills and later in the show, drummer ​Rod Morgenstein​ showed off his mad skills on the drums.

Now we all know why most people were there on this night, they wanted to hear their most popular hits they know and love. For every one they played, the crowd cheered louder and louder. Of course, they pulled out the heavy hitters “Hungry,” “Madelaine” and “Easy Come Easy Go” along with the power ballads “Headed For A Heartbreak” and “Miles Away.” During this time, ​Kip asked ​Beach, “What’s next”? He then turned to the crowd and advised “I like to keep my band on their toes.” “Well it’s not my band, but I like to think it is.” “It has my name — ​Winger.” The night was closed out with that little riff ​Beach brought into the recording studio back in 1988 — “Seventeen.” ​Kip then asked the crowd if there was a bass player in the house.  A fan proceeded to get on stage, strapped on ​Kip‘s bass and jammed out to “Ain’t Talkin’ Bout Love.” A show isn’t a show without a little ​Van Halen​.