On Friday, February 12th, the Medina Ballroom in Medina, Minnesota had a packed house to see Firehouse and Winger. A great match for any ’80s “hair metal” fan. I had seen both bands live before, but this would be the first time I would see them on the same bill. It had been a while since I have been at the Medina Ballroom — I’ve seen Warrant there a few times, Bret Michaels, Ratt, and a few others — so when I walked in, I was shocked to see that the layout had changed. They had seating at tables in the front half and the general admission was located in the back half of the ballroom. I was wondering how this evening was going to turn out for the bands. 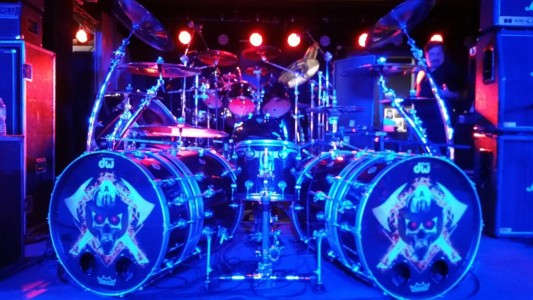 Firehouse got things started off with “Shake & Tumble.” Every time I have seen Firehouse, they have never disappointed, and this night wasn’t anything different. CJ Snare has not missed a beat and can still hit all those notes that has made him one of the best singers in rock. He was so spot on and I thought to myself — “he has to have back-up tracks helping him out” — but I know for a fact he did not! He is just that good! The next three songs were tracks off of their debut album. The setlist did favor that album as only a few tracks that night were from Prime Time and Hold Your Fire.

I am surprised it took Snare three songs in to finally say something about the people sitting in their chairs up front. He did make some funny comments about how old they are now and what type of crowds they are performing for. He also joked that “table 47, your steaks will be out soon.” That got a good chuckle from the crowd. Once everyone finally stood up, they kicked into “Rock On the Radio.” This had the crowd rockin’ but I knew it would only be a matter of time before th 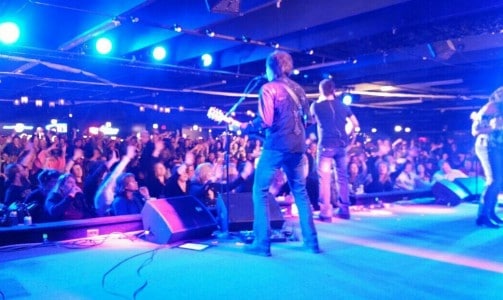 ey sat back down again.

Lead guitarist, Bill Leverty, absolutely kills it live. His guitar playing does not do him justice. You have to watch him play live to see what kind of talent he truly is. After “Rock On the Radio,” the band went into a guitar jam session and Leverty was showing the audience his mad guitar skills. Halfway through the session is when the crowd started to sit back down again. To say I was disappointed would be an understatement. I felt bad for the band. Not only is Leverty talented on the guitar, he is also a great singer. He sang on the next song, “Holdin On” while Snare was playing the keyboards. 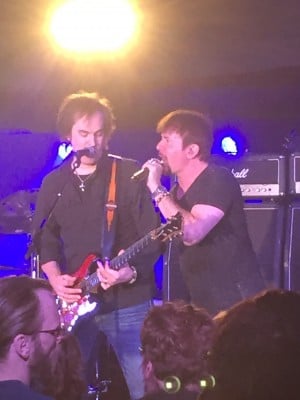 Snare had to make sure the crowd knew they were an American hard rock band that did write a few ballads, but they are a hard rock band first and foremost. Snare was shocked to know that some of the songs they wrote were songs that had been played at weddings and other major events in people’s lives. The fan/crowd favorite “When I Look Into Your Eyes” had a few people from the seated section get up and dance with their significant other.

“Door to Door” is another track off of Prime Time and drummer, Michael Foster, handled the lead vocals while Snare was in the back taking a break. Foster did a fantastic job drumming and singing at the same time. He has an amazing voice that fits that song perfectly. 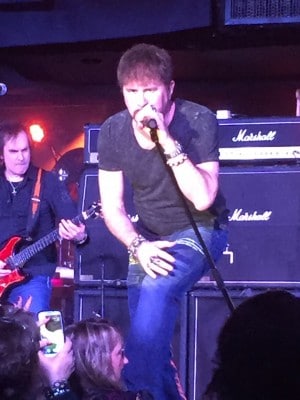 The rest of Firehouse‘s set was highlighted by Snare giving the crowd a choice of which song they wanted to hear — “Don’t Walk Away,” “You’re Too Bad,” or “Love Is A Dangerous Thing.” The crowd picked “Don’t Walk Away.” My choice would have been “Love Is A Dangerous Thing” because they hadn’t played anything off the third album, aptly named 3, and that song was stuck in my head all day. Another highlight was when they played “Love Of A Lifetime.” They had a couple come out and dance on the stage while the band played the song. I bet that had to be an experience they will never forget.

“Don’t Treat Me Bad” ended a wonderful set from Firehouse. If you have never seen them live, you are missing out! They sound amazing, have great stage presence, and do a great job making the crowd a part of the show. Even if you are not a huge fan and just know their singles, I am certain that after seeing them live, you will be a fan for life. I just hope that the next time I see them, they will be headlining so I can hear some of the songs I didn’t get to hear on this night.

The headliner of the night, Winger, started their show with a track from their 2014 release Better Days Coming — “Midnight Driver of a Love Machine.” I thought this was a ballsy move to start their set with a song that the majority of the crowd would not know. One would think they would start with a song off their first or second album release, but props to them for sticking to their guns on their new songs. It wasn’t until the next song “Easy Come Easy Go” that the crowd started to get into their show. The band was off to a great start and 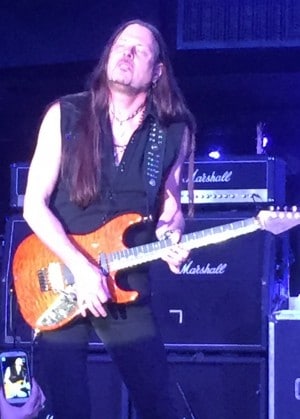 they were sounding good, but I could tell something was not right with Kip Winger’s voice. It was hard for me to notice on the first song since I was not familiar with it, but I could tell something was wrong during the second song. It wasn’t until a few more songs into the set that he made a comment about his struggles with his voice. He said that he had some “flem” in his throat and that he apologized for his voice not sounding right and that it would fix itself very soon. I could tell he was very upset with himself that he was struggling with the vocals, but he still kept a positive attitude and wanted to perform for his fans. He did mention that he was not the only one who has had vocal problems recently. He went on to talk about Joe Elliott’s issues while on the Def Leppard cruise. He said if there was a good thing to come out of that, it was that he got to perform “Photograph” with Def Leppard.

That night’s show did have all four original members of Winger in the house. I was told there are some shows that Paul Taylor is not able to make, so they have Donnie Smith with them to help with rhythm guitar. Smith was present that night, as he was playing rhythm guitar while Taylor was playing keyboards on many of the songs from Winger‘s setlist. The setlist did cover most of their albums, with the exception of IV. Kip did mention that the IV album is a little 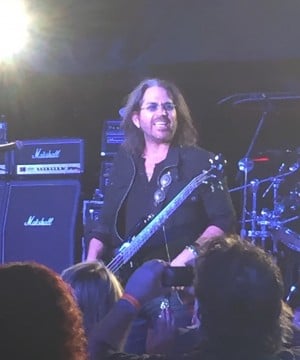 “proggy” and has been overlooked by many fans and press. I would have to agree with him, as I was not a big fan of that album. My favorite album from Winger is Pull, and I was disappointed that the only two songs they played from that album was “Down Incognito” and “Blind Revolution Mad.”

Winger did make time to highlight the talents of drummer, Rod Morgenstein, and guitar player, Reb Beach. Kip had Beach show the crowd what a “riff” was and made him create one on the spot! Morgenstein had a moment to show his skills during a drum solo that allowed the band a little break during the night.

As I felt the night was coming to an end, Winger started to play all their hits: “Headed For A Heartbreak,” “Can’t Get Enough,” “Madalaine,” and “Seventeen.” Once they played “Seventeen,” I thought that was the end of the night, but they came back out to play a few more songs. One of the songs was “Rainbow In The Rose.” Kip said they were unsure if they wanted to play that song, but after discussing it backstage, they felt it was a song that the crowd had to hear. 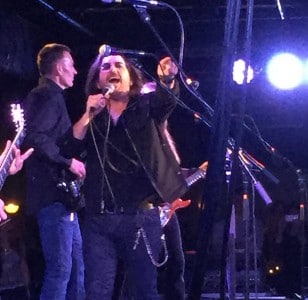 Since this was the first time I saw Winger headline a show, I did not know what to expect. So I was surprised to see that their closing song was a cover of Van Halen‘s “Ain’t Talkin’ About Love” and that they asked someone from the crowd to come up on stage and play bass guitar while Kip ran around the stage singing the song. From the way Kip was talking, this is a regular thing they do and I just love the fact that bands will bring fans up on stage to help perform a song. As a huge music fan and a person who would love to be part of a show, I think this is a great thing that bands will do to make their fans a part of their show. Props to Winger for making the fans a part of their show!

I also would like to take this time to thank Mike Piotrowski, John Tucci and Joe Marcella for the photos of the concert as I was not able to get close enough to take some good pictures with my phone.