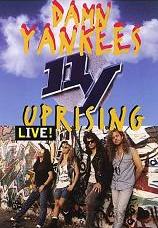 The winners of the newest Damn Yankees live DVD, Uprising are…..

The fans voted Ted Nugent as their favorite member of Damn Yankees with 51% chosing him. Tommy Shaw received 25% of the vote, Jack Blades 22%, and bringing up the rear was Michael Cartellone with 2%. New York Yankees shortstop Mariano Rivera received one vote from someone who was obviously mixed up over what Yankees this contest involved!

Thanks again to Rhino Records (www.rhino.com) for supplying the DVDs and to the 180 Damn Yankees fans who entered the contest from around the world. For those of you that didn’t win this time (look for a new contest coming soon), you can purchase the DVD at the following locations:

Description:
Originally released on VHS in 1992, and now on DVD for the first time, Uprising features the band at it’s peak in a live concert filmed at the Rocky Mountain Jam in Denver, Colorado. It’s the only video footage available documenting this brief but popular union. The DVD Includes behind-the-scenes rehearsal and recording sessions, plus exclusive backstage footage and interviews with the band.