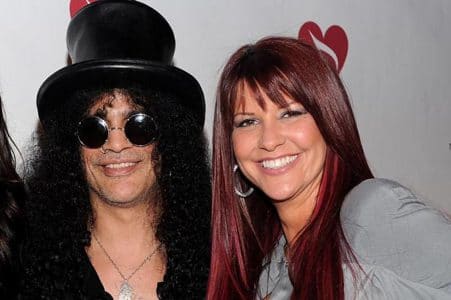 According to TMZ, the divorce between Guns N’ Roses guitarist Slash and his wife Perla is finally finalized with the guitarist having to pay $6.6 million to his now ex-wife along with $100,000 in monthly spousal support and $39,000 in monthly child support.

“Slash will keep all his guitars and any musical compositions he owns … with future proceeds belonging to Slash. He’ll also get a 2011 Ford F-150 and the Beverly Hills house. Perla will get the house in L.A., a 2014 Range Rover, 2 Mercedes.

Perla gets primary physical custody — and get this — each kid will get .09% of Slash‘s income for the next 20 years.”

Wikipedia states the following in part about Slash‘s personal life (with slight edits): “On October 10, 1992, Slash married model-actress Renée Suran in Marina del Rey, California. They divorced in late 1997 after five years of marriage. Slash married Perla Ferrar on October 15, 2001, in Hawaii. They have two sons, London Emilio (born August 28, 2002) and Cash Anthony (born June 23, 2004). Slash filed for divorce from Ferrar in August 2010, but the couple reconciled two months later. In December 2014, he again filed for divorce. Afterwards, he moved in with his girlfriend Meegan Hodges, whom he previously dated from 1989 until the beginning of the 1990s.”