Could a Slash Puppet reunion be in the works?

That is indeed a good question as an apparently impromptu reunion occurred with former Slash Puppet band members — Mif (lead vocals), Frank Bartoletti (guitar), Franklin Wyles (drums) and Pete Dove (bass) — all reunited under one roof on May 12, 2017. 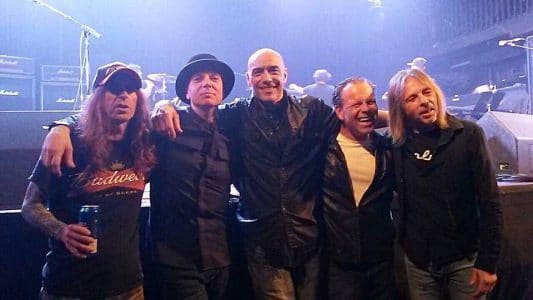 “Former **SLASH PUPPET** members randomly meet up on Fri May 12 @ Ugly Melon show @ Opera House > L to R: Pete Dove (bass), Franklin Wyles (drums), Mif (singer), friend Paul (from Safor, for those that recall there!), and Frank Bartoletti (guitar) > could a SP reunion ever be possible?!!”

If you’re wondering who the hell is Slash Puppet, Sleaze Roxx stated the following in its review of Slash Puppet‘s No Strings Attached released back in 2007 (which finished at #7 on the Sleaze Roxx’s Top Ten Albums of 2007): “When I first heard that Slash Puppet had some old tunes recorded that I hadn’t heard before, and that they were about to release them onto CD for the first time I almost came in my pants (figuratively speaking of course)! It wasn’t all that many years ago that I heard Slash Puppet for the first time on a Much Music rock video show. Being from Canada, I couldn’t believe that I missed out on this sleazy band from my home country. I quickly tracked down their 1993 EP and it was everything I imagined it would be – and I left it at that.

That is until now, when No Strings Attached arrived in the mail. Could this album live up to that lonely EP or was Slash Puppet nothing more than a one trick pony? Let me tell you right now, these guys have more than one trick up their sleeves. In this case there are eight of them, eight songs that grab you by the balls and completely rock. If you haven’t heard Slash Puppet before (in which case you should rectify that situation immediately) imagine Skid Row music being sung by a gruff throated frontman. Even though the music is top-notch, it really is the voice of Mif that takes Slash Puppet over-the-top. He has one of those unique voices custom made for hard rock, at times sounding like a more accessible version of Ratt‘s Stephen Pearcy.”