It is no secret that there was a rift between singer Ronnie James Dio and former Dio guitarist Vivian Campbell which the latter previously explained was about getting fairly compensated. Campbell was fired from Dio in the middle of the Sacred Heart tour back in 1986 and was replaced by guitarist Craig Goldy who has publicly taken the now deceased Ronnie James Dio‘s side on various issues. Former Dio drummer Vinny Appice recently stated that the other band members felt the same way as Campbell when the latter was fired from the band. Goldy has commented today on when he thinks problems started between Ronnie James Dio and certain band members. Goldy previously stated to Sleaze Roxx in an interview that he didn’t know what happened between Campbell and Ronnie James Dio. 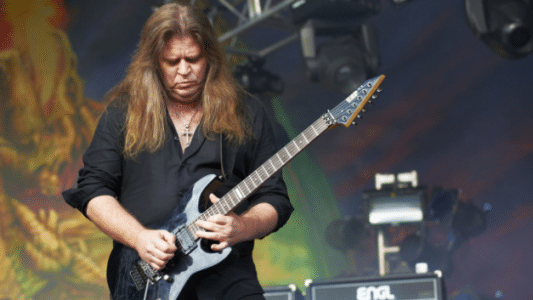 Well first of all, the band Dio was run like a family, because it was a family! And when an important family member dies…….those left behind often do things to keep their lost loved one’s memory alive! Ronnie had an extended family……his fans from all over the world! They were his family and his friends too! Whenever we do a Dio Disciples concert…..in my heart it is not a concert at all….but a memorial service in the form of a concert! His music played such an important role in so many people’s lives from all over the globe! Including myself again here too! In times of trouble……he was the voice that I turned to…..it was like we were friends before we ever met! That is what a fan was to Ronnie……a friend that he just hasn’t met yet! But then because his music was so amazing…..it got released around the world….and he did get to meet almost all of his fans!

When the “Sacred Heart” tour came out…..Ronnie practically cut his profit margin in half bringing the fans an 18 foot fire breathing Dragon…..it really did have fire coming out of it’s mouth……..lasers shot out of the Dragon’s eyes and wherever that laser would land…..an explosion would take place…..both visual and audio! He didn’t hike up ticket prices for all that……it was his way of giving back to the fans! 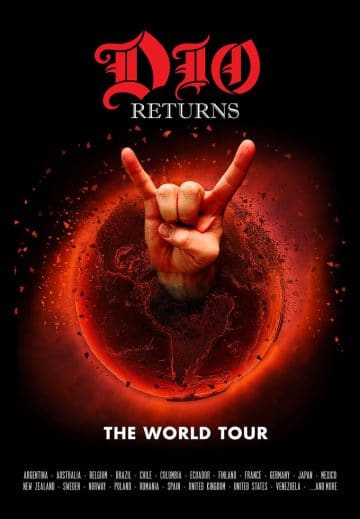 So even though a lot of money was made…..a lot of money was being spent! And I think that is when all the problems started with certain band members……cause they didn’t have the same heart for the fans as Ronnie and Wendy did!! It started to become about money!! And I’ll just stop there because things are getting better with certain band members and I don’t want to spoil it!!

The Hologram is supposed to be a gift to the fans! Plain and simple! Given in the same spirit in which Ronnie gave! People don’t remember……but Wendy was a big part of how that whole “Sacred Heart” stage set was built, put together and without hiking up the ticket prices too!! Same thing for the “Dream Evil” tour…..with a giant Metal Spider that came down out of the rafters and I shot it with lasers out of my guitar and then wherever I pointed my guitar…..an explosion would occur!

It was magical days with magical people behind that magic! This Hologram is just that! Some people never got to see Ronnie on stage with Sabbath and Rainbow……some of these holograms eventually will bring back those days too! This is something that is done in the name of love, honor, missing him and respect!! Nothing else!! And that is the truth! People’s opinion does not alter the truth! It only alters the perception of truth!

So, this Hologram tour is meant to honor the man and his music in the same spirit in which that man gave to this world….so we now give! And people will be missing out on an incredible experience if they let bad comments make that decision for them!

There is a fact of life….that runs parallel to this……when a group of people gather together with the same purpose, heart and mind as one another……something very special will always occur! Same thing for the Dio Disciples concerts/memorial services as I call them…..the fans that show up there also have the same purpose, heart and mind as we do…..and there is always a very special moment in time during these events, where the band and the audience bond and become one with each other……and when that happens……it is like nothing else…..and it is just something that you have to experience for yourself……this type of experience is beyond mere words! A woman can explain to another woman what it’s like to give birth and have a child…..And she could even watch Youtube videos…. but it’s nothing like the actual experience itself! And these concerts/memorial services……are very much beyond words as that example of the woman is!!!

Plus, I think Ronnie would approve of this hologram being done in the way it is being done….I’m sure that anyone who has worked as hard as he did…..and has made as big of a worldwide impact as he did….would like their name and memory carried on by those people that he loved and surrounded himself with by choice!!”