Dio Disciples, Dream Child and Resurrection Kings guitarist Craig Goldy was recently interviewed by Andrew Catania of All That Shreds.

In terms of Goldy‘s unreleased material with Ronnie James Dio, the guitarist stated: “Definitely!  It was one of the proudest and saddest times in my life because at that time, Ronnie was still in Heaven and Hell and he was given a clean bill of health by his doctor. So his doctor said, okay, you can do anything you want to do. One would think, okay, I’m going to go back on tour with Heaven and Hell, make as much money as I can because if those guys were back in the 20,000 seat arenas making money hand over fist, I wouldn’t have blamed him. He told Wendy, you know what I want to? He said I want to write with Craig. 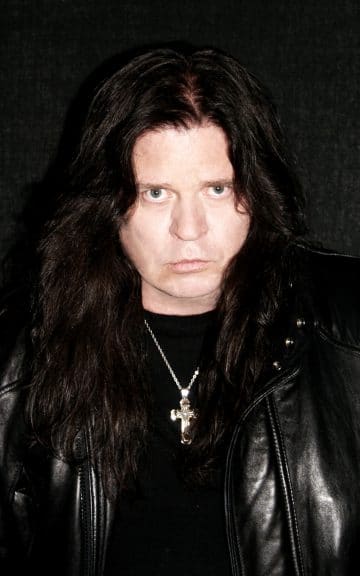 And so we started writing what was going to be the next Magica record. We only got as far as one song and the vocal bridge,  he never got a chance to finish. So we’re going to pick someone special. Wendy let me write the lyrics and melody lines for that local bridge and so now we’re going to find the right person to finish the song. We’ll bring it into the studio and have real drums,  bass, keyboards and guitar on it. There will be Ronnie’s voice. There are still some things that need to be done to it. Ronnie wrote this material about what was going on in his life at the time. So I tell people, it’ll be emotionally difficult to listen to, but at the same time, people are going to be like, this is definitely Ronnie.”

With respect to former Dio guitarist Vivian Campbell‘s thoughts about how bad he was treated in Dio, how he should’ve been an equal partner with Ronnie James Dio and opining that the Dio Disciples are a tribute band among other things in an interview with All That Shreds in 2016, Goldy stated: “It’s just unfortunate because I was there from the very beginning. Even in the Holy Diver days. Ronnie and I  were friends because I was working with him with the band Rough Cutt. Vivian keeps trying to say that Ronnie broke a promise. Ronnie is a man of his word. It wasn’t a broken promise, it was a promise deferred. That’s a totally different thing.I was there.I remember when they first started, the truck showed up and there was no crew. Ronnie was there unloading gear and everybody else was just standing around. I’ve seen this so many times when something needed to be done and there was nobody there to do it. Ronnie and Wendy would do it, and I was just looking at them like, you know, they’re doing so many things that I thought were so beneath them, that it would hurt my heart so I would lend a hand, just because I couldn’t stand to see him do stuff, but they were building.

Ronnie basically cut his profit margin in half and everybody wants to say, how much money Ronnie made, but they don’t discuss how much they spent here and they were onto something that some of the guys didn’t want to do. They weren’t on with that because that meant a cut of there pie would get smaller.  They were honest about it. Wendy and Ronnie’s hearts weren’t in it for the money. Jimmy Bain and I did some stuff together. Vinny Appice is a dear friend of mine and I like what Vivian did. The iconic sound, but people forget that everything that he did was under Ronnie’s guidance. Last in Line is nowhere near what they created in those first three albums. They were produced under Ronnie’s guidance. That’s what made them so great. Ronnie knew how to pull the best out of people.

When I joined Dio and I got my advance from the record company, all of a sudden, you know, people who shall rename nameless started asking to me with me because they wanted me to give them money. They felt that they deserved more money than what they got even though they didn’t do anything. Wendy and Ronnie told me I’d be crazy to give them any. Vivian is a gentleman sometimes. He’s always been a gentleman to me. Vivian did come from money. A lot of guys who come from money are kind of spoiled. Ronnie didn’t come from money. Let’s just call a spade a spade. Vivian is a great guitar player and he can be a gentleman. He can be a wonderful person, but you know, dear Lord, the only person I know that can hold 30-year-old grudges is my Mom.”

You can read the rest of the interview with Craig Goldy at All That Shreds.