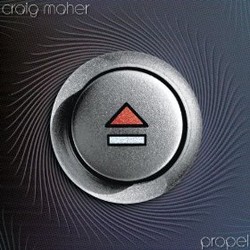 A fixture in the Metropolitan rock scene for the past ten years, Craig Maher coins his music, “Cosmic Contemporary”; a style that simply draws from his diverse musical background and influences that range from the Cosmic: the best of the 60’s and the early 70’s rock scene and its ties to Eastern music, Mysticism, and spirituality; and the Contemporary: anthemic rock championed by artists such as U2, David Bowie and Lenny Kravitz.

Propel is an impressive rock record with concise and hook-heavy songs led by Maher’s tasteful guitar riffs and vocals. Songs like “Propel” and “Where I Belong” showcases Maher’s keen ability to bridge modern influences with memorable rock hooks and classic song structures that embed Eastern tonality and mystical leanings. Maher also sheds light on some of his musical inspirations with a triumphant reworking of Nazz’s (Todd Rundgren)”Open My Eyes.” This album should appeal to fans of the major guitar rock zeniths from the last four decades, ranging from the psychedelic explosion of the Woodstock era, to the riff-oriented glam and grunge scenes of the late 80s and early 90s, all with a contemporary edge that sits fittingly in the modern rock landscape.

A free download of the song “propel” is available at http://www.mileshighproductions.com/images/tracks/craig_maher/propel.mp3.