After a six year break, Crank County Daredevils are back from the dead and about to release a new single on June 30, 2016 entitled “Kicked In The Teeth.” 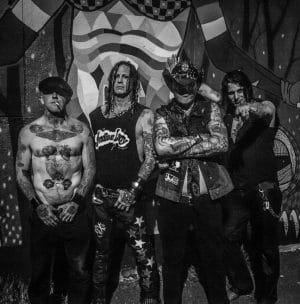 “Crank County Daredevils: Back from the dead, bearing gifts of a new single and new shows

Asheville, NC – Crank County Daredevils, officially back on the scene after a six-year hiatus, are set to release a new single titled “Kicked in the Teeth” on June 30, 2016. The single will be available for streaming and download on the band’s store and all major online music services. In addition to the release, the band is booking 2016/2017 tour dates in the US and Europe.

In 2010, the Crank County Daredevils completed a successful European tour playing nearly 30 shows across Spain, France, Germany, and Switzerland. After returning to the US to play SXSW, the quartet was struck by a series of unfortunate events. During this time, vocalist Scotty P., bassist Billy Velvet, and guitarist Rory Kelly became occupied with other projects, while drummer Mike Irwin relocated to Sweden. The band’s future was left uncertain.

In early 2016, the band reconvened in their hometown of Asheville, North Carolina, to jump-start the notorious Rock ‘n’ Roll machine that is Crank County Daredevils. Within a month’s time, the band had recorded their first new song in six years.

On the band’s long pause and return to the public, Scotty P. has this to say: “The band has always experienced setbacks since its inception in 2003. It’s part of the DNA of the band to get kicked in the face, and just when you think the fight is over, to get back up and do it again. This time it was six years due to other projects we were working on, including starting families. I always say there’s no expiration date on this band as long as we’re all above ground and capable of throwing down bare knuckle Rock ‘n’ Roll. And we are! A little older and scarred like junkyard dogs. And just as mean.”

Scotty P. on the new single: “It picks up where our story left off six years ago. If there’s one thing I’ve learned going 13 plus years in a DIY band such as Crank County Daredevils, it’s this: Life WILL kick the shit outta ya. Just grin and do it again.”

Sleaze Roxx stated the following in its review of Crank County Daredevils‘ self-titled studio album released in 2009: “They say time heals all wounds, but in the case of North Carolina’s Crank County Daredevils the wounds have festered in the three years since their last album Livin’ In The Red. In that time rumors circulated of the band’s demise, but instead they kept plugging away, this time with a new guitarist and drummer. One thing you have to admire about the Crank County Daredevils is that they stick to their guns. This self-titled CD features the same unrelenting sleaze metal that they have played since their formation. They haven’t become millionaires, or household names, and I doubt they give a shit about any of that. They don’t need a record label and they don’t need fame and fortune, all they care about is delivering raw, loud and mean music to a loyal following.”