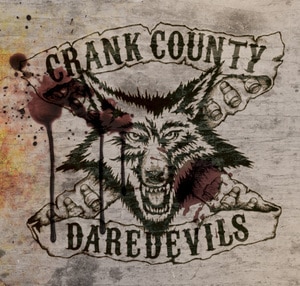 The Crank County Daredevils have announced that their new album, the follow-up to 2006’s Livin’ In The Red, will be released in early December. Songs from the upcoming CD can be heard at www.myspace.com/crankcountydaredevils. The band states:

“Whats happen’ folks, well things have been kickin’ into high gear as we are about to release our latest and greatest album to date. We are finally puttin’ out the album after much delay on our own accord and currently only available through our webstore and will be on itunes in a matter of weeks along with our entire back catalog. You can order the new album here – shopcrankcountydaredevils.com.

Also, we are playing quite a few shows in the southeast here to get ready for our big European tour from Jan 11 to Jan 30th. We will be in Spain, France, Germany and Switzerland. All the tour dates will be posted in a matter of days, as the last few tour dates are penciled in.

Stay tuned, as we have a couple of new videos we are working on and bringin’ the southern sleaze back to the U.S. soil for full tour in March and April 2010. Needless to say, a lot is shakin’ so come on out and join the circus!”