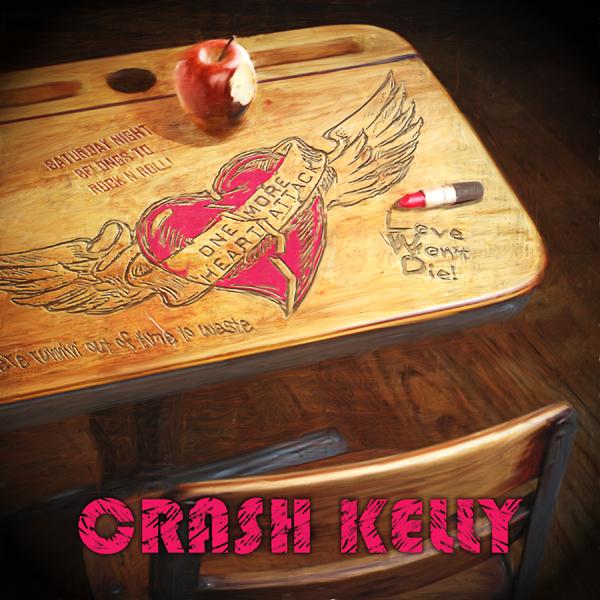 CRASH KELLY is back with ONE MORE HEART ATTACK

In the 5 years since Toronto-based guitar slinger SEAN KELLY laid the first CRASH KELLY song down on his Tascam 4 Track recorder, he has taken his rock n roll creation from the down and dirty clubs of Toronto to Arenas, Amphitheatres, and other major venues in North America and Europe. The albums PENNY PILLS and ELECTRIC SATISFACTION (the latter produced by ex Guns N Roses/Heart axe man GILBY CLARKE) were released worldwide through Liquor and Poker Music/Century Media (home of the Hellacopters. Backyard Babies, Hanoi Rocks), and helped CRASH KELLY garner tours with ALICE COOPER, QUIREBOYS, BACKYARD BABIES and others, as well as support slots with MOTLEY CRUE, POISON, CINDERELLA, WASP and many other hard rock heroes.

In late 2007, French rock label BAD REPUTATION released a compilation of the first two CK records and singles entitled LOVE YOU ELECTRIC for Europe only. The compilation has received rave reviews in the European press, including a half-page 8/10 review in Classic Rock magazine.

In order to bring his latest rock n roll vision to fruition in the live arena, Sean has assembled what he considers to be the best CRASH KELLY line-up to date. Long time CK band mate Allister Thompson on bass, Gene Scarpelli on guitar, and Tim Timleck on drums also contribute stellar performances on ONE MORE HEART ATTACK.

In 2008, CRASH KELLY will be back on the road and bringing ONE MORE HEART ATTACK to Rock N Roll Fans the world over.

Crash Kelly will be the special guest on Gilby Clarke’s June 2008 Canadian Tour! Get ready for a night of loud guitars, killer tunes, and more hooks than a tackle box!