Crashdïet guitarist Martin Sweet has released a rather surprising  ‘sleazified’ cover of New Kids On The Block‘s song “Tonight” which was originally released back in 1990. 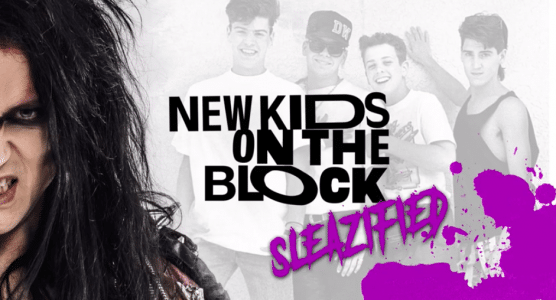 Wikipedia states the following about the New Kids On The Block in the early ’90s (with slight edits):

“By early 1990, New Kids On The Block had become one of the most popular acts in the United States. The following May, they followed up Hangin’ Tough with Step By Step, which featured slightly more than half of the songs co-written and produced by the members themselves. The first single, the title track, raced to number one on the Hot 100 Singles Chart and became their biggest selling single. It was followed up with the top ten “Tonight”, which extended the consecutive top ten singles chart run to nine records. “Let’s Try It Again” hit No. 8 on the UK Singles Chart, whilst “Baby I Believe In You” went No. 1 on the Japanese Chart, further signifying the international appeal of the group. The album was eventually certified triple platinum, selling close to 20 million copies worldwide.

The group performed an estimated two hundred concerts a year, with an extravagant worldwide concert tour that summer, called The Magic Summer Tour, sponsored by Coke. The tour ultimately grossed $74 million ($133 million, adjusted for inflation), making the group the top-grossing touring act in the country at the time and one of highest-grossing concert tours of the decade. The tour had an overall attendance of 3.2 million people. Their 1990 pay-per-view special broke cable-TV history at the time. During this time, the group became heavily merchandised. NKOTB-licensed merchandise included lunch boxes, buttons, T-shirts, comic books, dolls, trading cards and even a Saturday morning cartoon in their likeness, which was developed by the writing and development team from Pangea Corporation and animated by DIC Entertainment. In 1991, sales for the group’s merchandise were estimated at US$400 million.”

Here’s an odd cover for ya!”Tonight” Originally recorded by New kids on the block in 1990.Everything recorded by me!Request my next cover in the comments :P/…