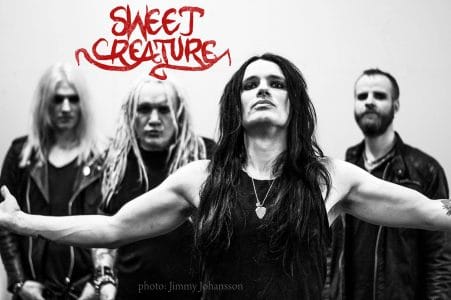 Crashdïet guitarist and Sweet Creature frontman Martin Sweet has released a new song entitled “Burning Midnight Oil” for streaming. Sweet Creature have announced that their debut album will be released in October 2016.

The new group has already released a lyric video for the song “Not Like Others.” Sweet was interviewed by Sleaze Roxx a few months ago and stated the following regarding the songs on the new upcoming album: “The single [“Not Like Others”] is probably the most modern sounding on the album. The rest is more retro sounding in terms of arrangements and feel. I’ve been trying to figure out the genre or style of the songs for months now, but it just feels pathetic to label your own music before anyone has heard it. It’s up to the public to describe the music. For me, it’s just rock n´roll… and I like it! My goal is to put out the album this year. I did, however, want to start a little “buzz” online, before I reach out to labels and stuff like that. I’m also considering crowdfunding as a possibility.”