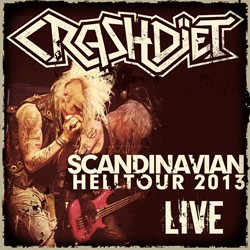 Crashdiet have released a digital live album as a thank you to fans who helped the Swedish rockers raise funds in order to keep their latest tour afloat. ‘Scandinavian Hell Tour 2013 Live’ is a sixteen song collection recorded during the band’s latest tour. Mixed and mastered by guitarist Martin Sweet, the album can be downloaded now at www.crashdiet.org/webshop.

When Crashdiet manager Michael Sunden suddendly passed away after slipping and suffering fatal head injuries at a live gig, the Swedish rockers found themselves with tour dates scheduled but a lack of funds needed to continue. To keep the tour going the band started a hugely successful fundraising campaign in order to raise the money necessary to continue their tour in support of their latest album ‘Savage Playground’. Now, for those who missed the campaign, ‘Scandinavian Hell Tour Live’ is here!

At the time of launching their fundraising campaign the members of Crashdiet stated, “Crashdiet aren’t the kinda band to just lay down and die when any tragedy comes our way and if you know our history we’ve had our fair share. Usually, we can take these setbacks on our own and keep the show on the road as they say. This time, no matter how tough we think we are, we can’t do it alone. We need you, our dedicated fans and those who just love rock and roll like we do to help finish this tour… its sad but true. So many have given so much that letting them down would be another setback we don’t think we could survive. So if you’re a Crashdiet fan here’s your chance to support your favorite band and snag some one of a kind items what will never ever be available again. Even if you don’t live near anywhere we are playing, even if you can’t see us on this tour, even if you don’t like us… you’ll be giving a fan a chance to rock out like you did when you listened to us or saw us play.”

Crashdiet have experienced tragedy before. Original lead vocalist Dave Lepard committed suicide on January 20th, 2006, less than a year after their ground-breaking ‘Rest In Sleaze’ release. However the band soldiered on with 2007’s ‘The Unattractive Revolution’ and 2010’s ‘Generation Wild’, the latter named album of the year by SleazeRoxx.com.