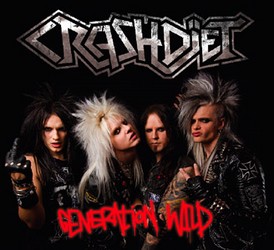 Crashdiet have announced that their new album Generation Wild will be released through Gain/Sony Music on April 14th. The album was produced by swedish team RamPac and mixed by Tobias Lindell (Europe, Mustasch). The band states, “We are extremely satisfied with this album. After writing over 50 songs, we have chosen the 10 absolute finest for the album.Now we’re ready to tour the world!”

The new single Generation Wild will premiere on Sweden’s Bandit Rock radio (www.bandit.se) this Friday at 07:30. The single will exclusively be released together with Sweden Rock Magazine (www.swedenrockmagazine.com) in the last week of February. If you’re a subscriber of the magazine you are guaranteed a copy!

Generation Wild tracklisting:
Armageddon
So alive
Generation wild
Rebel
Save her
Down with the dust
Native nature
Chemical
Bound to fall
Beautiful pain