Crashdïet have formally announced that they will be playing the last Rest In Sleaze Festival on November 9, 2016. The question remained on who would be handling lead vocals for Crashdïet who have been without a lead singer following the sudden departure of their third lead vocalist Simon Cruz in or about February 2015. 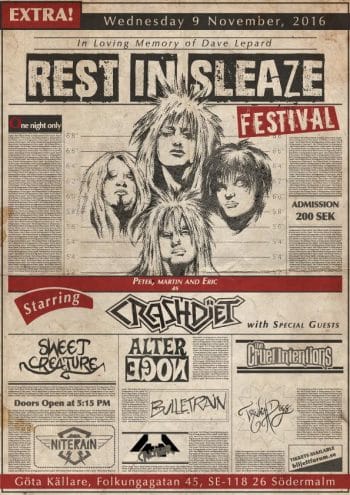 The following message (with slight edits) was posted on Crashdïet‘s Facebook page today providing some details of how the group will be handling their Rest In Sleaze Festival performance:

In memory of Dave Lepard we have decided to participate in the last edition of the REST IN SLEAZE Festival, held by Dave‘s mom Lisbeth.

We will perform as a trio with some very special guests!

Additionally, Peter London and Martin Sweet will perform with their side projects Alter Egon and Sweet Creature.

Hope to see you there!

(Btw… the superb artwork is made by Christel Mentges! ♥)”