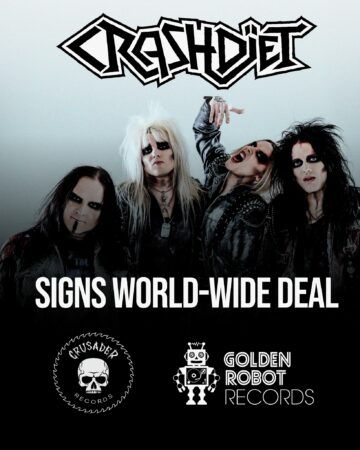 We are thrilled to sign a world-wide deal with Crusader Records / Golden Robot Records!

A new studio album will be released in early 2022!

“Studio album number five and singer number four! Amazingly, Crashdïet do not seem to miss a beat when it comes to releasing one solid album after another despite the setbacks that any band would experience with the almost constant change of lead vocalist from one album to the next. Rust sees Crashdïet take a slightly more modern route with their brand of sleaze rock and the results are simply very good. New lead vocalist Gabriel Keyes was given lots of time to get situated and comfortable within the band prior to the release of Rust given that he had already been part of the Swedish group for eight months or so prior to the announcement that he was the band’s new frontman in December 2017. Crashdïet then played a number of concerts while working on the material that eventually morphed into Rust. Crashdïet continue to prove that they can withstand just about any sort of singer adversity and come back strong. One can only hope that Keyes will be in Crashdïet for the long run as it would be interesting to hear whether the group will be able to top Rust with Keyes singing on the next album or whether the band will falter like they did from Generation Wild to The Savage Playground with lead vocalist number three (Simon Cruz).”